Cincinnati-based Earth & Ocean Restaurant Group (the team behind Hyde Park's E+O Kitchen) is bringing the fresh flavors of the Mediterranean to the Queen City with the recent opening of Okto downtown. The Greek restaurant concept takes over the space formerly occupied by E+O New Asian at the corner of Walnut and E. Seventh streets, right across the street from Weston Art Gallery. Okto hosted its grand opening on Aug. 24. The restaurant group will be opening a second E+O Kitchen at The Banks soon. While Cincinnati is home to dozens of high-end eateries — several located within blocks of the new establishment — Okto holds its ground as being one of the only upscale Greek restaurants in the area, which was one of the deciding factors in its inception. Anthony Castelli, marketing director of E & O Restaurant Group, says the team surveyed locals to find out what they were looking for in the restaurant scene, and the answer was clear. "When we asked (Cincinnati residents) to tell us about a category of food they feel has been under-served in Cincinnati, an overwhelming majority responded with Greek, Mediterranean and vegan. For those reasons (and perhaps the fact half of our ownership is of Greek descent), fresh, elevated Greek was a natural choice," Castelli told CityBeat in an email interview. Okto sets out to be a sophisticated, yet approachable, dining destination with fresh ingredients, an esteemed chef and an immersive experience for guests. Chef Wissam Baki, the talent behind Okto's both undeniably beautiful and delicious dishes, gained experience in kitchens throughout the globe before finding his way through Okto's doors. Chef Baki is from Lebanon and has been making a name for himself in the restaurant scene since the age of 16. "Chef Baki began cooking Mediterranean cuisine in Beirut before eventually moving to Dubai cooking both Greek and Italian cuisine," Castelli says. "Wissam then went on to open a steakhouse in Canada and then moved to Miami working at Estiatorio Milos, a Greek restaurant. Most recently the head chef at Astra, a rooftop restaurant in the heart of Miami with a focus on Greek and Mediterranean cuisine." The menu at Okto includes traditional Mediterranean dishes, like savory tiropita and spanakopita pastries, kebabs, flaming saganaki (a pan-fried Greek cheese) and baklava, as well as branzino (deboned at the table), lobster pasta and chef Baki's signature octopus carpaccio. The are many options for vegetarian and vegans as well, like the beluga lentil salad, with fresh herbs, ginger, arugula goat cheese and balsamic dressing. To wash it down, Okto's bar is stocked with a selection of wine and liquors imported from Greece and cocktails created to pair nicely with the restaurant's Mediterranean flavors — as well as a few non-alcoholic cocktails to choose from. The restaurant's dining space is broken up into two main areas, with the bar at the center between the two.  To the left of the bar are several velvet-booth tables with a vibrant mural featuring an octopus. To the right of the bar is the larger dining space with neutral tones of light tan floors, white chairs and light fixtures and black accent walls. Upstairs the eatery has a private dining space. Castelli says in terms of design, they aimed to transport their guests from Cincinnati to a Greek villa. Castelli says this fall they will open their outdoor dining area, with help from the City of Cincinnati and the City Manager's Office. Okto is open 5-10 p.m. Tuesday-Thursday; 5-11 p.m. Friday and Saturday. Okto, 645 Walnut St., Downtown.
Photos by Hailey Bollinger
Scroll down to view images

Hailey Bollinger
A spread of dishes available at Okto

Hailey Bollinger
Dining space to the left of the bar 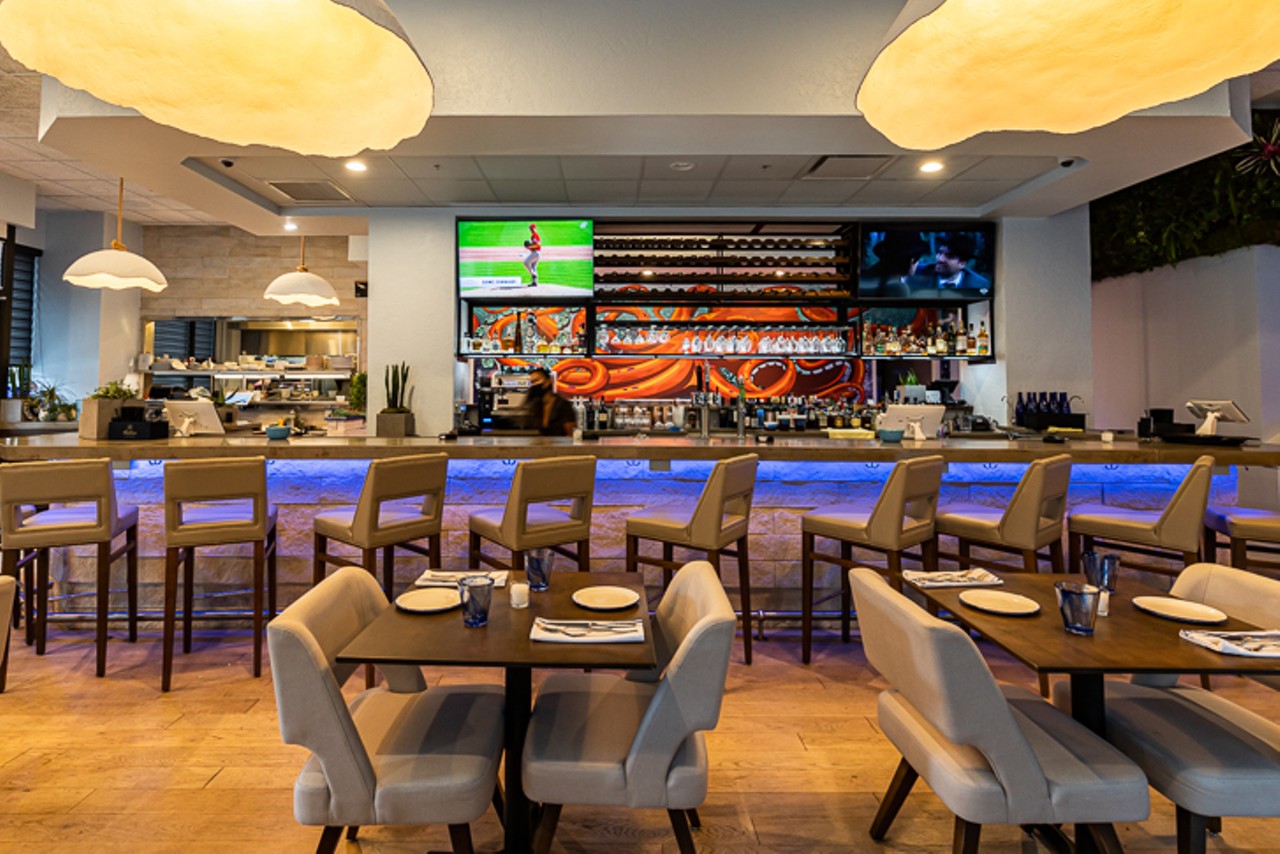 Hailey Bollinger
Seating inside of Okto 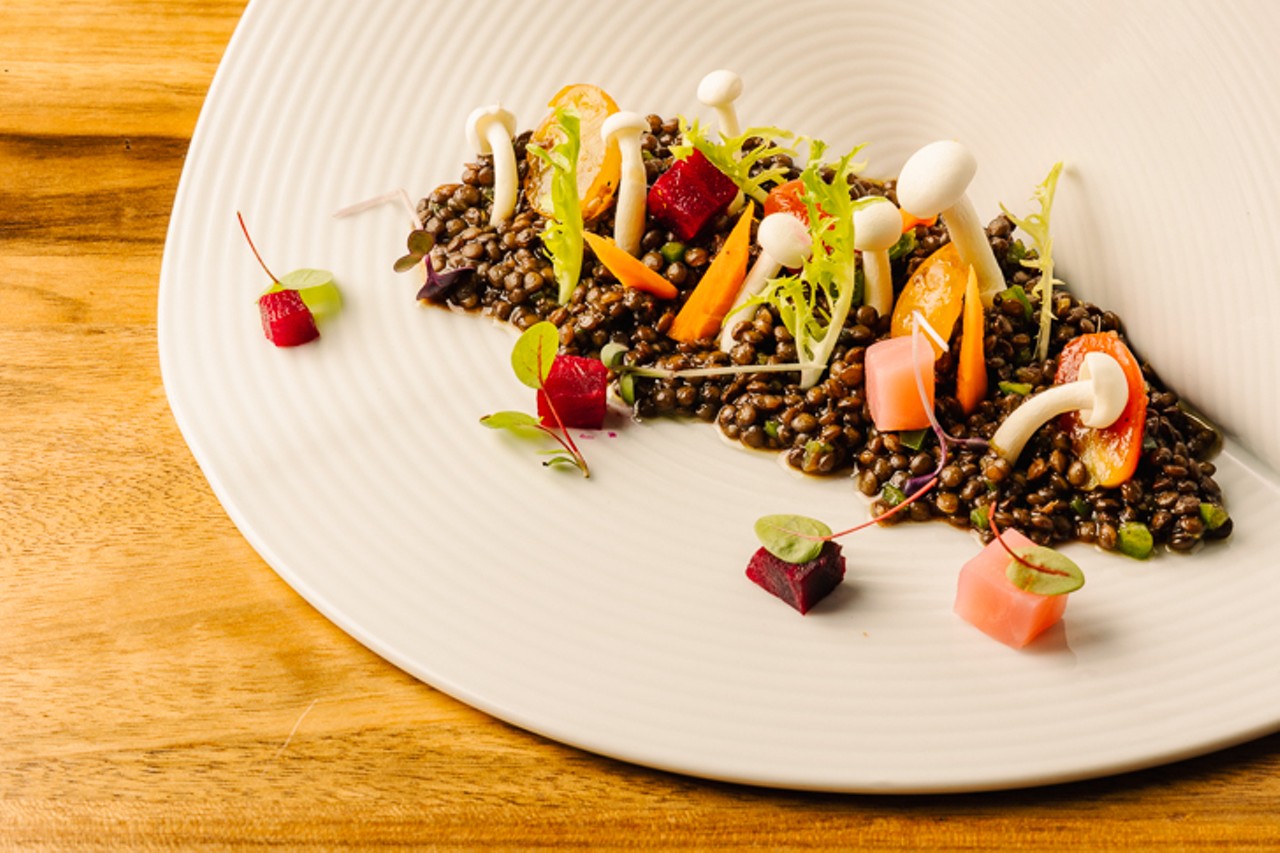