It's all about chicken and tradition 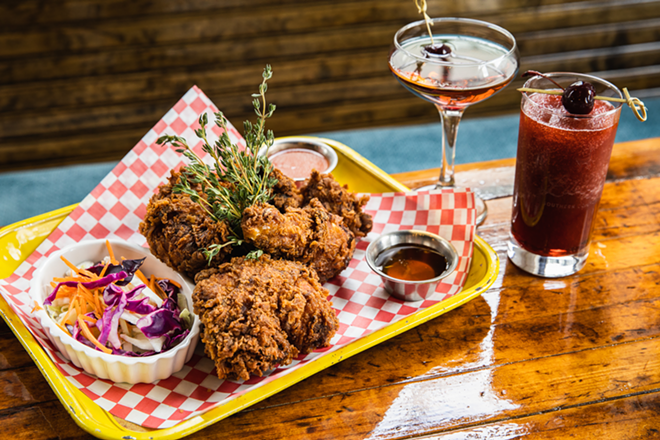 If I were ever to write an autobiography, one theme might well involve fried chicken.

My maternal grandmother, who birthed nine babies, worked a family farm in rural Georgia, northwest of Savannah. They raised chickens, along with crops, and she could fry up those birds to perfection. Milk gravy from the drippings, rice (not potatoes in Georgia), a pot of green beans and pillowy biscuits rounded out the meal. As the oldest girl among siblings, my mother learned how to produce the same delectable feast by the time she was 7 or 8 years old.

In her later years, mom got tired of the work involved in that meal, and I’ve never attempted to deep-fry anything — it’s just too messy. But those wonderful Southern dinners at grandma’s and my childhood home made me a picky customer for restaurants specializing in fried chicken.

There’s no denying that the folks behind Libby’s Southern Comfort have impressive bona fides in the poultry arts. The owners of this entry into Covington’s flourishing restaurant scene claim not just a family history of chicken expertise but a professional one to boot, with a lineage going back decades. Butch Wainscott owns the Greyhound Tavern in Fort Mitchell, which has maintained a reputation for exceptional chicken dinners throughout the 30-plus years that he’s been at the helm. This summer, his son, Brad, fired up the fat in Covington and opened Libby’s.

As far as ambience and décor, Brad’s place — co-owned with his wife, Michelle — bears little resemblance to the Greyhound, which features wood paneling, white tablecloths and tables spaced far enough apart for quiet conversation. Libby’s isn’t any of those things. General manager Tevin Buffin told me they’re going for a “cozy, comfort feel” at Libby’s, but I’d call the vibe high-energy, high-decibel and hip. At least, that describes the bustling scene we encountered at dinnertime on Derby Day this month.

We arrived without reservations — because they don’t take them — and were told we’d have a 20- to 30-minute wait. Happily, it was much shorter; we had just gotten a drink from the bar when a table opened up. I liked the layout of the place. To the left is a medium-sized dining room and on the right is a dozen-seat bar with a couple of high-top tables. Exposed brick walls accented by windows on three sides make it more spacious, and a large patio on one side of the building expands capacity when weather allows. Although Libby’s is by no means all about the chicken, that’s definitely the main food attraction.

For excellent fried chicken, you need to start with primo poultry and cook it in very hot fat until it’s golden brown on the outside and moist throughout. Two out of my party of four ordered the two-piece chicken dinner ($14.25), including me. The meat itself was high quality, and the prep may not have been quite the same as my childhood chickens, but we had no complaints. My folks used to fry it at a higher temp, I think, because the final skin color came out darker and just a bit crispier. But I quibble: This was good chicken.

Before we even got there, though, we had cocktails and beer and shared a couple of appetizers: goetta hush puppies ($10.25) and fried green tomatoes ($11.95). Both dishes pleased us, especially the tomatoes. They came piled with so many tasty toppings — pimento cheese mousse, pork belly lardons and bourbon onion jam — that you almost couldn’t taste the tomatoes. The hush puppies were fine but not that different from ordinary pups; in other words, the goetta didn’t seem like it made a significant contribution to the taste. We did like the two dipping sauces: a remoulade and a citrus honey cream.

If I hadn’t been determined to try the chicken, I might have ordered an Oyster Po’ Boy ($12.95) — I love fried oysters. Libby’s comes on a Blue Oven potato bun, something else I’m fond of, and is one of five items on the menu’s sandwich section. A Pork belly BLT and shrimp roll also looked enticing. There are also a couple of salads and a daily soup offering.

Entrées include chicken dinners (two, four or eight pieces), a plate of fried oysters, a decadent open-faced sandwich called Charlie Brown, meatloaf and shrimp and grits. You get either two sides or a salad, depending on the dish. My companions tried meatloaf and shrimp and grits, with mixed results. The meatloaf ($16.95), made in-house, was the better of the two. Accompanied with garlic mashed potatoes and excellent gravy, it made for a satisfying meal. My friend liked her shrimp and grits ($15.95) well enough, but the portion was small and there were hardly any grits on the plate. I’ve been a fan of the now-staple Southern dish for quite a while, and nothing about Libby’s version stood out for me. And really, grits are super inexpensive, so they ought to pile more on the plate.

I’d like to see a few more “side” options along with the standard potatoes, mac and cheese, french fries, coleslaw and (for a Southern meal) appropriately overcooked green beans. There’s a chilled black-eyed pea salad that my companion liked, but they didn’t have a veggie of the day, despite what the menu listed. Thus, the green beans were the only cooked green and nutritious vegetable you could get. The small biscuits served with most entrées were disappointingly dense, either a baker’s lapse that day or something that needs improvement.

Desserts for the most part were substantial and rich, which I find hard to enjoy after chicken, potatoes and gravy. I got the “oatmeal cream pie,” actually two small oatmeal cookies with a cream filling that came in a little paper bag. I ate one at the table and had its companion for breakfast the next morning. They were yummy.

I might never encounter a chicken dinner to match those in my memory’s eye from grandma and mom. But I’m glad this Kentucky family is keeping the tradition alive.