Do you know where your lederhosen are? 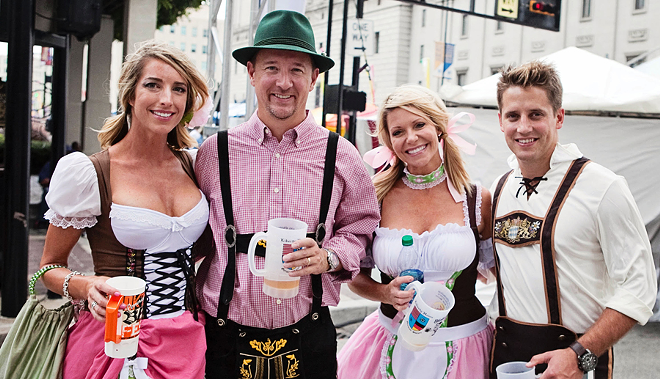 A few weeks ago, Cincy lost the dear Blank Slate Brewing Company. According to a statement published from owner Scott LaFollette, “The reason for our closure is pretty simple. We ran out of money.” He also noted that with the influx of local craft breweries, it became more costly to stand out in the crowd. Just a note to remind people to support all of our local breweries, especially the smaller ones.

Labor Day is upon us, which means explosions in the sky on Sunday at the WEBN/Western & Southern-sponsored fireworks over the Ohio River. Newport’s Wooden Cask and Darkness Brewing will both be open for the spectacle. Axis Alley will also host a fireworks viewing party at the vacated Jefferson Hall at Newport on the Levee. Braxton’s pale ale Short Fuse — the official beer of the fireworks — will be available to quaff during the cacophony. Ticket prices range from $25 (two drink tickets) to $150 for VIP (four seats and a bottle of Bacardi and mixers).

Sept. 15-17, Cincinnati becomes Zinzinnati at Oktoberfest. As usual, the event — which takes place on Second and Third streets between Walnut and Elm streets — will be rife with giant pretzels, German beers from local and international breweries and all the German costumes you can handle.

• MadTree’s popular Dreamsicle — an orange and vanilla kölsch — gets a can release 4-8 p.m. Thursday. Stop by the taproom to purchase a six-pack for $10.50 (limit one case per person).

• Every month, Listermann launches a new beer in cans or bottles. On Saturday, it’s Brass Monkey (a “hazy, East Coast IPA”) and Brass Monkey Junkie (the same beer but with mangoes added). Sales begin at 10 a.m., but the doors and bathrooms will be open at 7 a.m. Beers will be sold in cans and available on very-limited draft. While you’re at Listermann, check out their growing graffiti wall, which was installed so kids could legally create street art.

• In expansion news, MadTree has launched distribution in the Lexington and Louisville markets, and this week Braxton launches in Nashville.

• The summer edition of Cincy Beerfest takes place Sept. 8 and 9 at Fountain Square. More than 100 breweries will pour their suds throughout the weekend. There will also be food trucks, live music and a VIP area. Tickets cost anywhere from $15 (two pints or five samples) to $50 (25 samples). It is a family-friendly event, so bring the kids.

• On Sept. 9, Old Firehouse Brewery, located in Williamsburg, celebrates its third anniversary with food trucks and specialty brews. Some of the proceeds will support local firehouses and EMS workers.

• Who says you can’t run (or walk) while drinking a beer? On Sept. 22, the Cincinnati Beer Run will prove it is possible during the 5K night race. Put on your glow gear and head to the starting point at Riverboat Row in Newport. The race snakes through Cincy and ends back in Newport. Every half mile you will get to sample a beer. After completing the 3.1-mile course, indulge in a pint of beer from Newport’s Oktoberfest, happening Sept. 22-24. Tickets for the run cost $40-$45.

• Fifty West’s annual Fifty Fest returns on Sept. 23. The all-day event features beers from more than 25 breweries, including Goodwood, DogBerry, Cellar Dweller and Fat Head’s. Besides the beer, there will be three stages of live music and food trucks. ©