Like most of Cincinnati, CityBeat staffers feel two distinct ways toward the annual arrival of Jimmy Buffett in our fair city (Buffett and the Coral Reefer Band return to Riverbend Music Center on July 18). In our internal Buffett wars, his pilgrimage either signals that it’s time to break out the Hawaiian print and get yourself to a tropical tailgate (I fall into this camp) or it’s definitely not (see Mike Breen's story on Buffett here).

According to the annals of Buffett fandom’s salty-rimmed history, Cincinnati — or “Fincinnati,” depending on which way your lei leans — is the birthplace of the phrase “Parrothead.” In 1985, a Coral Reefer Band bassist remarked that the chillaxed, tropically costumed masses filling Kings Island’s TimberWolf amphitheater were in fact “not Deadheads” (obviously), but “Parrotheads” (presumably because they were wearing hats with parrots on them). The name stuck.

So, needless to say, Cincinnati has developed quite the following for everyone's favorite margarita musician. In fact, if you aren't a Parrothead, you probably know one, whether it's your uncle, neighbor or coworker. They're everywhere. And they've been waiting for this day all year.

My best friend's family (and avid Buffetters) began inviting me to experience the Parrotheaded pandemonium three years ago — this year will be my fourth. While I probably wouldn't consider Buffett's feel-good tropical melodies to be lyrical masterpieces, I'd be lying if I said they weren't catchy. But the real party takes places with the tailgaters, where one day out of the year, hundreds of drunk, lei-laden Parrotheads swarm the gravel lot across from Coney Island and turn it into somewhat of a beachy paradise (if you drink enough you might see it, too) complete with baby pools, sand pits, live music, grill outs and plenty of frozen margaritas. 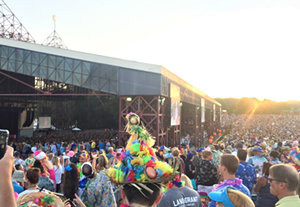 While most concertgoers are seasoned professionals in the art of Buffetting, there are a few Cincinnatians who haven't made it out to this one-of-a-kind party and could benefit from some insider tips. I may be a rookie, but I’ve gathered wisdom from some Jimmy Buffett veterans who were willing to share their advice about tailgating, free tickets, bites, best concert spots and more. You're welcome.

Plan to take an Uber or Lyft unless you have a designated driver in your group or friend/family member to drop you off and pick you up.

Dress the part. Buy or borrow a tropical shirt from a friend. You can usually find some real gems at your local thrift store. Accessorize with a fun hat and lei (your local party store should have what you need).

According to my friend's mom's friend, who is a professional Buffetter, "Tailgating is limited to where you can actually tailgate." The parking lots at Coney Island and Belterra do not tolerate shenanigans, so you need to seek solace in the gravel lots across from Coney Island. It gets pretty wild 'round those parts.

People get there EARLY to start tailgating; we're talking 6 a.m. If you are hoping to snag a spot for your tropically decorated RV and mini pool, you have to arrive early, too. You know what they say, "The early parrot gets the frozen marg"... or something like that.

If you're interested in seeing the concert but not interested in actually paying for a ticket, make pals with the really drunk guy tailgating and hope that they like you enough to insist you take their ticket because they're too drunk to make it. There's a pretty good chunk of humans that don't end up actually making it into the show because they fell victim to one too many margaritas.

Setting up camp on Riverbend's lawn:

The lawn is where the party's at. This also means that it's really freaking crowded. Set up camp with your crew on the outskirts. This enables you to have quicker access to food/drink/restrooms and it will be easier to find your stuff when you want to leave.

If you're planning on driving, pack some after-show snacks to enjoy while you wait a very long time to leave the lot.