The solution could come at a steep cost due to inflation. 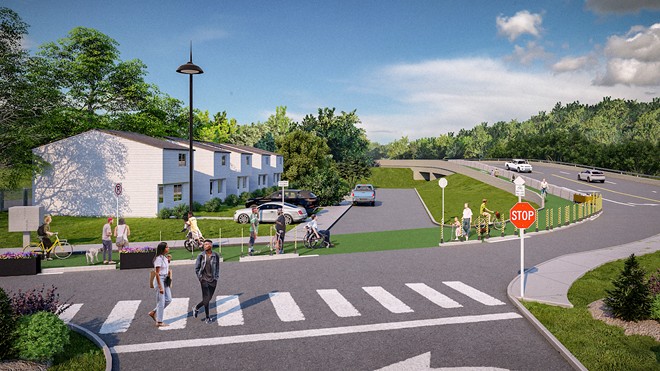 Photo: Provided by Devou Good Foundation
A rendering shows how a bike path on the Covington side would connect to the dedicated lane on the Girl Scout Bridge.

It’s been more than a month since a driver struck and killed Gloria San Miguel on the Girl Scout Bridge connecting Newport and Covington, sparking a push to quickly install protective barriers for cyclists on the bridge.

Devou Good Foundation — an organization that supports active transportation in Greater Cincinnati — was prepared to install temporary water walls on the bridge in the week following the deadly crash.

Water walls are plastic orange barriers filled with water to give them weight. Their use would have been free and immediate because the foundation already has them in stock, but the Kentucky Transportation Cabinet (KYTC) says this option would pose more dangers for cyclists.

The alternative being proposed by KYTC is a barrier similar in size and shape but twice as heavy. Concrete barriers, or “Jersey blocks,” are heavy-duty barriers often used in construction zones to protect workers from oncoming traffic.

“While it’s disappointing that KYTC is right now not accepting the water wall, we think that the concrete barrier wall – and we agree with them – will be safer than the water wall,” says Matt Butler of the Devou Good Foundation. “Although we do see the water wall as being a potential solution, it may not be the one that they prefer.”

Butler agrees with KYTC that the concrete barriers may be able to stop a vehicle in its tracks better than a water-filled barrier, especially when considering how fast drivers are going on the Girl Scout Bridge.

Photo: Provided by Devou Good Foundation
According to data the majority of drivers on the Girl Scout Bridge are severely breaking the speed limit, as indicated above the red line.

The downside of sourcing concrete

There are drawbacks to the barriers, though.

“I think if we can all agree and go forward with the concrete barrier, that’s the preferred route, but it’s definitely not the quicker route,” Butler says.

Butler says the concrete barriers will take time to cast, transport and install all the way from Louisville, which is their closest option for the project. The Devou Good Foundation, which is picking up the entire bill for the project, will need to foot the transportation cost of hauling multiple truckloads of materials that already are soaring in price.

Concrete has been hit particularly hard by inflation, with the National Association of Home Builders saying prices are the highest they’ve been in decades. Butler was unable to provide a cost estimate for the project by press time.

The next steps towards getting the two-way protected cyclist lane on the bridge will come from the Newport and Covington city manager’s offices who will need to sign off on the permit application for the barriers. From there, KYTC’s engineers will evaluate the Girl Scout Bridge’s weight capacity before thousands of pounds of added concrete are added to the deck. 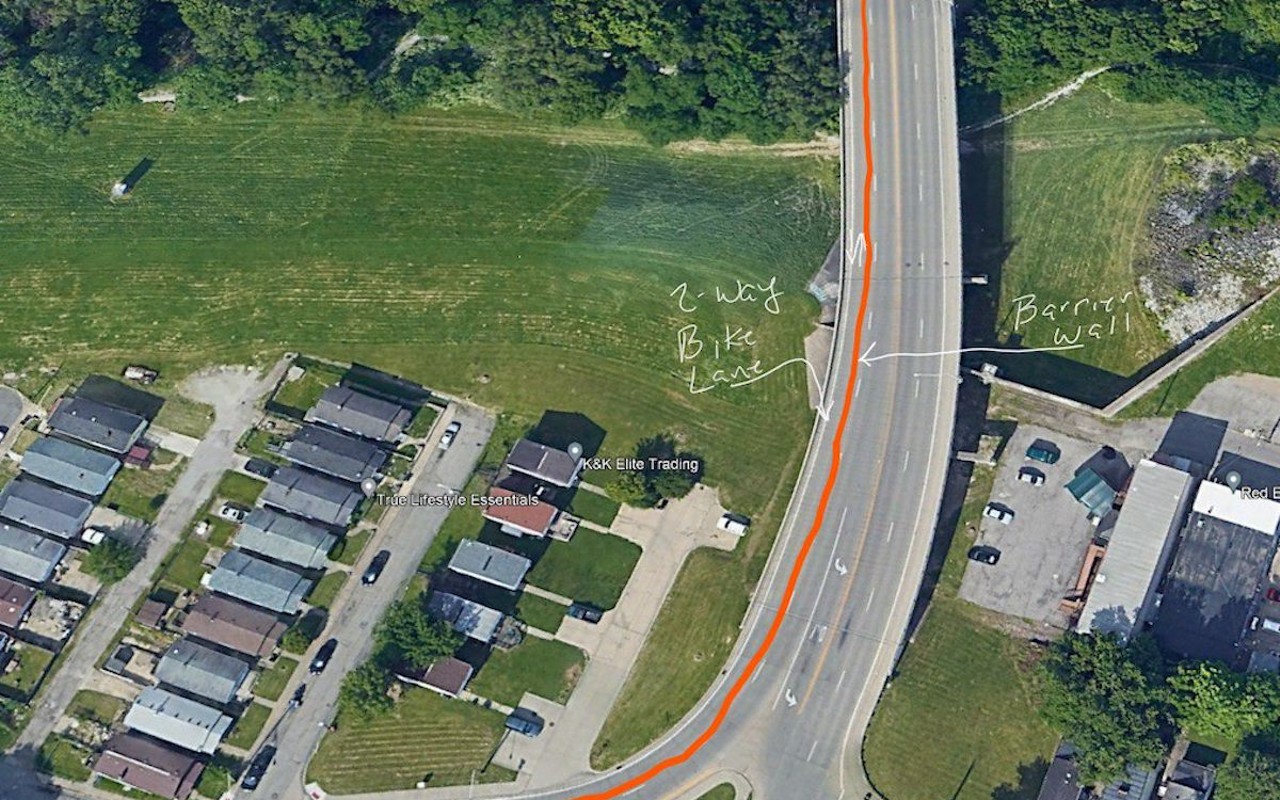 
While KYTC owns the bridge that connects Newport and Covington, Butler says Tri-State Trails is leading the way on the project so the bridge will connect seamlessly to trail systems in both cities. Similarly, the recently completed Beechmont Bridge Connector gives cyclists and pedestrians an extended dedicated lane that safely connects the Little Miami Scenic Trail to the Ohio River Trail for the first time.

Butler says the permit application for the protected bike lanes on the bridge needs a signature from one city manager on either side of the bridge, and both Newport and Covington are in favor of the protected lanes.

“We were very pleased to be a part of the conversation about safety in the bridge,” says Newport city manager Thomas Fromme. “We fully support the concept of both a temporary and a permanent solution, whatever they may be.”

Covington’s city manager, Ken Smith, says his department gathered feedback on what should be done with the bridge, but they are leaving the guidance up to the experts.

“The City of Covington hosted the meeting earlier this month about the shared concern of bike safety on the state-owned bridge and gave its preliminary approval to a separate bike lane on that state route that connects Covington and Newport,” Smith says. “We were told later that the [water wall] was no longer feasible, and we haven’t been party to the subsequent discussion. That’s not our expertise anyway.”