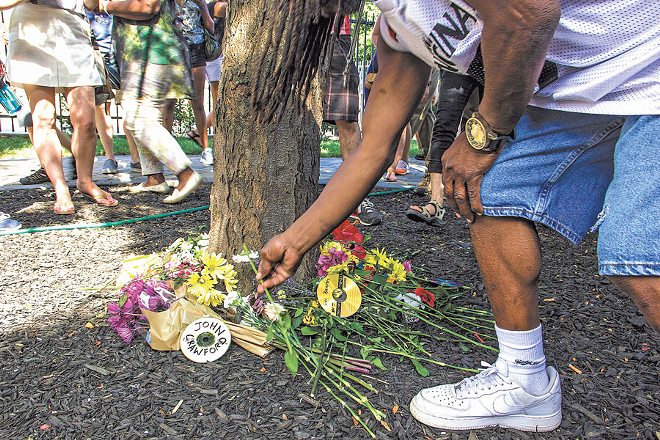 It’s been 15 years since the city of Cincinnati, its police department and racial justice advocates entered into an unprecedented agreement to reform law enforcement practices.

After a decade and a half, those groups are exploring how to update the nationally lauded, but perhaps unfinished, Collaborative Agreement.

City officials are optimistic about the refresh. Cincinnati Police Department leadership and officers say, for the most part, that they’re on board. Advocates who were part of the original Collaborative say it’s brought positive change, but also point to deep and remaining distrust and disparities — reasons they've called for a refresh in the first place. It will take efforts beyond policing to address community problems and fulfill the promises of the original agreement, they believe.

Cincinnati’s hard-won reform effort stems from a lawsuit filed against the city by the Black United Front after the deaths of 15 black citizens at the hands of police.

Cincinnati civil rights attorney Al Gerhardstein, who serves as counsel for the Black United Front, still has the jacket 19-year-old Timothy Thomas was wearing when Cincinnati Police officer Stephen Roach shot and killed him in 2001, sparking days of civil unrest in Over-the-Rhine and setting the city on the path toward the Collaborative. He says it reminds him of the life-and-death stakes of the work at hand.

“We (have) dramatically reduced arrests in recent years, and that’s great,” Gerhardstein says. “But there remains a deep racial disparity in the arrests we continue to make, and that’s a challenge, through this collaborative refresh, we must address.”

City officials, including Mayor John Cranley, put a more positive spin on the election-year effort. They point out that the refresh is a voluntary measure meant to shore up what is already a lauded model. Indeed, federal oversight for the city’s reform efforts ended in 2008 when a judge deemed all parties compliant to the agreement.  Activists involved in the original agreement, however, don’t want politics in their push for an update.

“This isn’t about any candidate,” Black United Front’s Iris Roley says. “This isn’t to support John Cranley. We do need a refresh, but the people should be running this, not City Hall.”

The idea to update the Collaborative Agreement took root in December of last year with efforts from activists like Roley, and the city formally launched the refresh with a packed news conference at City Hall in early June.

“We want to make sure we keep our Collaborative Agreement updated, refreshed, and the spirit alive, in theory as well as in practice,” Cranley said during a recent forum on the effort. Cranley was a City Council member when the original agreement was forged.

Central to the effort is a taskforce headed by Saul Green, an attorney whom federal courts tapped to monitor the original Collaborative Agreement in 2002. He and others, including University of Cincinnati criminal justice professor John Eck, will produce a report detailing the efficacy of the agreement thus far and making recommendations for further reforms.

“We as a country haven’t gotten on top of this,” Green said at a Sept. 27 forum about the refresh efforts, citing the nationwide tumult over police shootings of unarmed black citizens across the country captured on ever-more ubiquitous cell phone cameras. “We’re still having problems between the police and the community.”

Among the focuses of the effort: ramping up community engagement with the Citizens Complaint Authority. The CCA was created by the Collaborative to give citizens an independent place to lodge complaints about police misconduct. But it has struggled with funding woes and leadership changes in the recent past.

As refresh efforts ramp up, distrust for law enforcement in Cincinnati along racial and class lines remains. That’s not surprising — statistics show deep racial disparities linger when it comes to Cincinnati’s justice system.

A study commissioned by the Black United Front and executed by University of Cincinnati faculty and graduate students surveyed more than 1,250 residents of Cincinnati and nearby areas about their attitudes when it comes to the Cincinnati Police Department. The respondents — about 41 percent black and 59 percent white — roughly mirror the city’s racial makeup and were further statistically weighted to match 2016 Census estimates for Cincinnati.

Another survey of criminal justice and other professionals in Cincinnati funded by the city had some similar findings. Twenty of 31 respondents to that survey disagreed with the idea that the city of Cincinnati fairly and equitably enforces the law among all groups of residents, though they rated CPD high in other areas.

“Police and citizens need to acknowledge that there is a pattern of targeting minorities in metropolitan Cincinnati and other cities, suburbs and rural areas,” one of the respondents wrote.

University of Cincinnati political science professor Brian Calfano helped put together the surveys. He says they’re just one piece of the puzzle.

“Statistical analysis is really good at isolating certain things, but we shouldn’t take these results as the only word about what’s driving certain perceptions people hold in the community,” he says.

Beyond perceptions, some specific things have improved since 2002. Use of force by police in Cincinnati has dropped nearly 70 percent in the past 15 years. Injuries sustained during encounters with officers have dropped by more than half.

But deeper disparities remain. In 2001, the ratio of black citizens arrested hovered around 77 percent. That percentage hasn’t budged since and has, in fact, been higher in some recent years. Disparities for juvenile arrests are even more stark.

The number of use-of-force incidents by CPD officers has dropped since 2000, but police-involved shootings by CPD still disproportionately involve black Cincinnatians.

And between 2010 and 2016, police shot four times as many black residents as white residents in Cincinnati, which is 45 percent black and 50 percent white. Twenty-eight black individuals have been involved in officer-involved shootings, while seven white individuals have been involved in similar incidents.
Blacks also account for a similarly disproportionate percentage of the city’s crimes, which often happen in low-income areas where minorities have been isolated by decades of government policies and market forces. Those factors can influence the ways in which those communities are policed.

“We’re seeing that neighborhood plays a role,” UC Ph.D. student Shaonta Allen says about the survey, which she helped create. “We have this institution of policing, but it looks different and operates differently in different neighborhoods. That’s a key finding that we should be recognizing.”

There are signs attitudes are changing. A survey of 300 CPD officers found many not only accept the Collaborative, but think it’s been an asset to the department — a marked shift in sentiment to the days following 2001.

“People want to be engaged, informed, they want to take part in this and they want to be helpful,” CPD Assistant Chief David Bailey said about officer responses to the survey.

That shift may be fragile, however. The refresh effort found itself in choppy waters earlier this summer as Cincinnati’s Fraternal Order of Police Lodge #69 voted to pull out of the process over fallout from the Ray Tensing trial. Only about 10 percent of the FOP’s membership, mostly retired officers, took part in the initial vote. A more recent vote late last month gave the FOP the go-ahead to rejoin the refresh.

For reform advocates, the refresh is part of a long process.

“The disparities are huge, but I think things we’re seeing aren’t so complex that we can’t tackle the issues,“ Roley says. “We’ve seen some incremental changes happening. What this gives us is the ability to pull the layers of the onion back to see where people can plug in to help fill in the gaps, to pump some real, live citizen thought into fixing it.“ ©