Why did it take reporters to motivate the mayor to call for an audit of former ally Dwight Tillery’s latest venture? 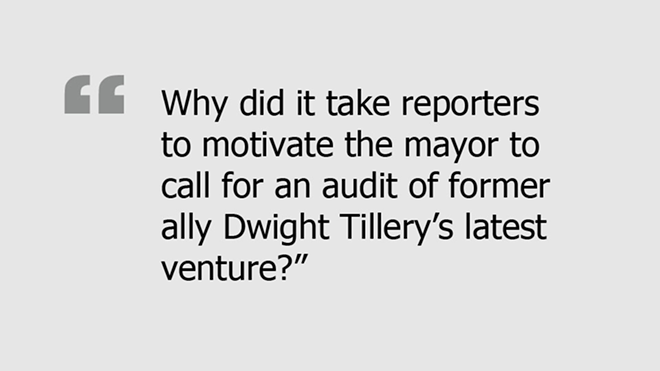 It’s our local version of Too Big To Fail or Friend of Charlie, Friend of John.

The more reporters tell us, the more we wonder if seeming ineptitude reflects implicit or explicit directions to turn a blind eye to grant recipients and bills submitted for reimbursement.

To their credit, reporters continue to reveal administrative shortcomings when it comes to overseeing how taxpayers’ money is spent, but reporters aren’t auditors.

Put another way, why did it take reporters to motivate the mayor to call for an audit of former ally Dwight Tillery’s latest venture? He’d been getting city money for years.

The Enquirer and wcpo.com dug into Tillery’s nonprofit, Center for Closing the Health Gap, and reported lots to question. So what’s new?

Meanwhile, bosses at WCPO and The Enquirer are arguing over credit for Cranley ordering an audit of Tillery’s spending.

It’s no secret that Tillery and lots of others — think Park Board senior staff — push acceptable limits on spending under their grants/budgets.

Convinced of their own virtue, what they do must obviously be virtuous.

That cast changes as opportunists see a chance to dip into the public trough or seek or grant favors. All of this is history. It will be repeated. We will learn nothing. Someone down the food chain will get tossed under a bus or streetcar — if it’s running.

What WCPO and The Enquirer can do is stay with the story.

Only they have the staying power and resources.

Meanwhile, Tillery’s allies already have played the race card in the pursuit of Tillery and his spending.

• A frightening story debunks the “frightening and high” risk of sexual offenders committing new crimes. There never was evidence for this omnipresent assertion although it has guided American courts for decades.

On March 8, New York Times’ Adam Liptak traced sexual offender fiction through Supreme Court decisions back to its origin, “a 1986 article in Psychology Today, a glossy magazine written for a general audience.

The magazine article was about a counseling program run by the authors and they made a statement that could be good for business. ‘Most untreated sex offenders released from prison go on to commit more offenses — indeed, as many as 80 percent do,’ the article said, without evidence or elaboration.”

Liptak added, “That’s it. The basis for much of American jurisprudence and legislation about sex offenders was rooted in an offhand and unsupported statement in a mass-market magazine, not a peer-reviewed journal.”

• More digging found the origin of Donald Trump’s unsupported claim that Barack Obama wiretapped him last year. The Daily Beast and others trace it to an election-eve post on the new Heat Street website.

There, Louise Mensch said, “Two separate sources with links to the counter-intelligence community have confirmed to Heat Street that the FBI sought, and was granted, a FISA court warrant in October, giving counter-intelligence permission to examine the activities of ‘U.S. persons’ in Donald Trump’s campaign with ties to Russia.”

She didn’t mention wire taps and no one paid much attention until Trump tweeted his accusation, but it didn’t take long for other news media to embellish her story.

“I was really thrilled,” Mensch told The Daily Beast last week  about the president’s reaction, “because I thought he was simply admitting that my story was true.”

• Jill Abramson’s essay in The Guardian is worth a read. She’s a regular there and former executive editor of The New York Times. Her March 8 essay begins, “Fake news has morphed into something far more egregious, fake history. Donald Trump routinely lies about himself, his accomplishments, his businesses and his opponents. This is how he wins the political upper hand and dominates the news cycle. The lying is no longer surprising.

“It’s his willful ignorance of history, mirrored by members of his cabinet, that is astounding and, in some ways, even more demoralizing.”

Anti-vaxxers got an injection of hope when Robert F. Kennedy Jr. told reporters at the National Press Club that Trump is considering naming him to head a commission to oversee vaccine safety and scientific integrity.

Trump and scientific integrity? If the possibility weren’t deadly, it would be hilarious.

Credulous coverage demonstrated news media addiction to clickbait even though the autism-vaccination link and its advocates have been discredited.

RFK Jr. is an anti-vaxxer. He brings minor celebrity to the cause. He told reporters his commission would be made up of “Americans of the highest integrity” who might include corporate CEOs and “doctors on television.”

Writing in London’s Guardian, Paul A. Offit, physician and director of the Vaccine Education Center at Children’s Hospital of Philadelphia, said the commission would be filled by people “with no experience in the design, research, manufacture or testing of vaccines and no expertise in areas like immunology, virology, microbiology, statistics, biology or epidemiology.

“Ignorance, despite RFK Jr.’s enthusiasm for his personal vaccine commission, is never an advantage. … Nonetheless, RFK Jr. would be given yet another platform for more fake news that could cause more parents to avoid vaccines and more children to suffer — a federal commission working against the health of children.”

“The criticism is valid,” O’Reilly said. “We should have clarified that he had no direct role with the Swedish government.” Forget facts. The guest was anti-immigrant and that was good enough.