Engineers have said that among many problems, at least one pier holding up the bridge has almost completely deteriorated. 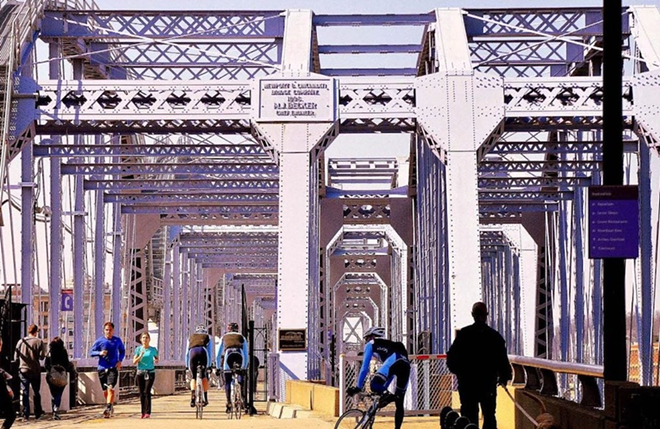 Photo: facebook.com/purplepeoplebridge
The pedestrian Purple People Bridge closed on May 11 after a stone from one of its piers fell into the Ohio River.

There's still no timeline to reopen the Purple People Bridge after portions of it fell into the Ohio River in May.

The Newport Southbank Bridge Company, the nonprofit that operates the structure, said earlier this week that engineering firm WSP USA Inc. recommended that the entire bridge deck be fully surveyed before reopening should be considered.

WSP also reported that pier one, which is the bridge's northernmost pier on the Ohio side of the river, has significantly deteriorated and must be repaired. The firm said that the pier's condition does not structurally affect the rest of the bridge.

Newport Southbank said it would review options with officials from Cincinnati and Newport to determine how to move forward. The organization does not have a timeline set for reopening.

The Purple People Bridge, also known as the Newport Southbank Bridge, closed in May when a large stone from the first pier came loose and fell into the river. It was followed by several smaller stones from the pier.

"We understand the public’s frustration with the closing and ask for patience as we ensure the safety of those who visit the bridge," a note on the bridge's website says.

Opened in 1872, the Purple People Bridge was constructed for railroads and later welcomed streetcar and automobile traffic. The bridge became a pedestrian walkway in 2006 and is on the National Register of Historic Places.

The Purple People Bridge's woes come as bridges throughout Ohio, Kentucky and the nation have fallen into disrepair. In April, U.S. Vice President Kamala Harris visited with Greater Cincinnati officials to discuss a plan that would devote $600 billion to transportation infrastructure. $115 billion of that would be used to repair roads and bridges, Harris said.

And one of the worst bridges in the nation spans both states over the Ohio River — the Brent Spence Bridge, whose issues officials have promised to fix for decades.