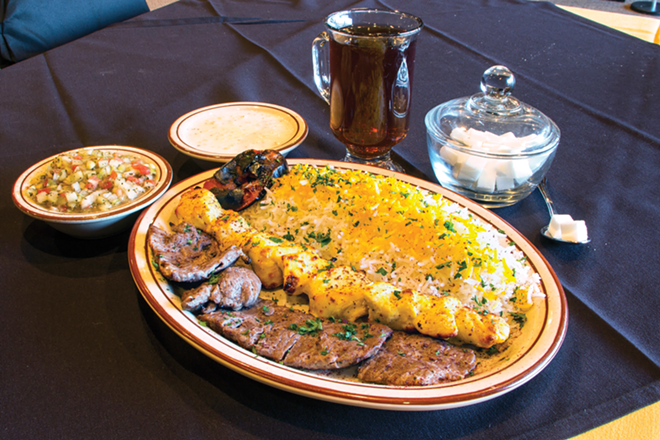 incinnati, until recently, lacked an authentic Persian restaurant — there are several Mediterranean restaurants in the city, but Persian cuisine consists of different spices and marinades. Finally, in November, the Iranian Mostofi family opened Persian Nights in West Chester, making it the only restaurant of its kind from here to Columbus.

Owner/co-chef Mehrdad Mostofi had another Persian restaurant in Mason in 2007, Caspian, which shuttered. But since cooking is his passion, he found a way to open Nights and continue his love of cooking for others.

As someone who’s half Persian, I like to think I know Persian food. Since both of my parents are excellent at making this type of food and I’ve eaten at some of the best Persian restaurants in Tehrangeles, the bar was set pretty high when I walked into Persian Nights. The dining room is large and open with black and yellow tablecloths and serviettes, framed Persian artwork on the espresso-colored walls and a few round tables that are set up as if prepared for a banquet. Persian music lightly plays in the background as an admixture of both Persian and American diners sample kabobs, some probably for the first time.

They don’t have a liquor license yet, so alcohol is limited to their BYOB private events that usually entail a Persian DJ and a belly dancer; they also are in the business of making customized birthday and wedding cakes, and, believe me, their pastries are scrumptious.

The long menu centers on their kabobs: koobideh (ground meat), beef chenjeh (chunks of beef tenderloin), lamb, shish kabob and barg kabob (filet mignon), and for $45 you can get the The Night’s Feast consisting of all of their chicken, lamb and beef varieties. Right now they don’t have any seafood on menu, but they assured me salmon and shrimp kabobs are in the works.

Like a lot of cultures, Persians take their beverages seriously. Dough is a yogurt-mint drink that’s so good I could drink an entire pitcher by myself, and their Persian hot tea is poured from a samovar into a glass Irish coffee mug and served with a sugar cubes. The rubric is you’re supposed to pop a cube in your mouth and then take a sip.

Before we ordered our appetizers, the waitress dropped off some homemade sesame seed bread, but typically at Persian restaurants the starter is panir sabzi, a plate of fresh herbs, walnuts and feta cheese. Apparently a lot of the herbs used aren’t available in Cincinnati, so the restaurant decided against offering it. That’s OK — the bread, or “noon,” was very good. To be fair, many other Persian restaurants have a much larger kitchen and staff, which enables them to have an extensive menu, but Persian Nights does a great job with the resources available to them.

The appetizer sampler ($11) is the best way to try three dishes at once like kashk-o-bademjan (eggplant), mast-o-khiar (a yogurt, mint and cucumber dip) and hummus, all of which were made just right. I ordered one of their soups, ash-e-reshteh, made with noodles, herbaceous minced parsley and mint, and kashk (whey-like sour cream) drizzled on top that conjured a slight tartness.

Most of the entrees are an assortment of kabobs — Persian Grill Mix #2 had succulent skewers of chicken and filet mignon ($21) presented next to a charred tomato and a pile of basmati rice yellowed from saffron, with a side of shirazi salad (diced tomatoes, onions, cucumbers, mint and lemon juice); and one of the kabob-less entrees, the falafel platter, came with six fried balls circling a bed of rice. I think it’s strange when a Persian restaurant offers hummus and falafel — my dad never made them — but they’re great vegetarian options. Besides dinner, Persian Nights is open for lunch, when they offer special weekday rice dishes.

We were pretty glutted when dessert time arrived, but we couldn’t take our eyes off their resplendent dessert case: almond baklava, Jell-O cake, bamieh (deep fried dough covered in honey), roulet (cream swirl cake), Napoleons and more. After perusing the endless rows of sweets, we settled on the baklava and pistachio Persian ice cream. The small piece of baklava was sticky and sweet — the way it should be; the ice cream — made with rose water — tasted nutty, floral and incomparable to any other ice cream.

It’s nice to know I can go to either my family’s house or Persian Nights for homemade Persian food, and with Norooz (Persian New Year) right around the corner, I’ll most likely be watching belly dancers at the Nights.