The Queen City has also welcomed an Italian comfort food spot, a New York-style deli and a new location of a brunch favorite. 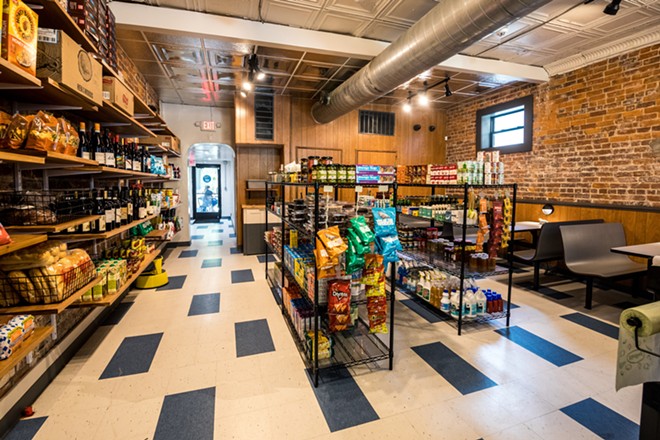 It has been a sweet summer season for the Cincinnati dining scene with the recent openings of several bakeries and ice cream shops. But it isn’t all just sugar — there’s some spice, too. The Queen City has also welcomed an Italian comfort food spot, a New York-style deli and a new location of a brunch favorite.

Crown Restaurant Group (Crown Republic Gastropub, Losanti, La Cantina) has refreshed and reopened one of its downtown eateries. The former Rosie’s Cocktails & Pints — which temporarily closed in August — has been transformed into Rosie’s Italian. Helmed by chef and owner Anthony Sitek, the menu focuses on family recipes and traditions. Diners can expect scratch-made pastas, Italian-style main dishes and the same New Jersey-style pizzas Rosie’s was previously known for. The menu is divided into antipasti, shareables, primi (pastas), secondi (entrees) and pizza. There are options like stromboli, Puglian orecchiette with sausage and broccolini, chicken piccata and a Tie-Dye Pizza with vodka sauce, tomato sauce and pesto.The goal is to embody the feeling of a Sunday Italian supper. 300 E. Seventh St., Downtown, rosiesitaliankitchen.com.

Two Cincinnati culinary and coffee favorites have banded together to bring a little bit of the Big Apple to the Queen City. Chef Jose Salazar and his JPS Restaurant Group and Deeper Roots Coffee have partnered to open Daylily Deli, a New York City-inspired bodega, deli and coffeeshop in Columbia Tusculum. The menu features everything from the New York staple egg and cheese on a roll to a chopped cheese sandwich (with ground beef, cheese, banana peppers, sauteed onion, lettuce, tomato and special sauce on a hoagie) and even an egg cream coffee soda. Along with a selection of grocery staples and goods from local artisans, Daylily also serves wine and beer, plus Deeper Roots’ full coffee menu. 3751 Eastern Ave., Columbia Tusculum, daylilydeli.com.

Helmed by the team behind Revolution Rotisserie, Milkman recently opened in the former rotisserie chicken’s spot on Race Street. The eatery serves up nostalgic vibes, smash burgers and a long list of soft serve, sundaes and shakes — both boozy and non. With a unique take on classic diner food, dishes include burgers topped with everything from jalapeno cream cheese to Cincinnati chili, fried chicken sandwiches and “not a burger” options like hot dogs, salads and Italian beef sandwiches. There is also plenty for non-meat eaters including tofu nugs and fried tofu substitutions from local CinSoy. 1106 Race St., Over the Rhine, milkmanbar.com.

College Hill is now home to El Camino Baking Co., owned by Ryan Morgan, who gained national attention as owner and head baker of Sixteen Bricks, and pastry chef Megan Ketover, who’s established a great reputation in the industry as executive pastry chef for Boca and, more recently, Khora and Hart & Cru. As of the opening date in late August, the bakery offers an assortment of pastries — think seasonal fruit tarts, croissants and other elevated fare — and for bread, there’s cardamom and apricot bread made with khorason ancient grain flour, pain de Campagne, schiacciata made with Yocora Rojo flour, whole wheat “Super Seed” loaves and spelt-made baguettes and pretzels. The menu rotates because, as Morgan puts it, El Camino gives him the chance to make bread that he wants to bake. The bakery serves coffee along with all of its carb-centric offerings and is set to add pizza to the menu in the near future — once Morgan builds out the rest of the building, which will include a dining room. 5915 Hamilton Ave., College Hill, instagram.com/el_caminobakingco.

Gold Spoon Creamery, a hand-scooped ice cream shop, has opened its first location at Summit Park in Blue Ash. Previously, it operated as a pop-up shop within Proud Hound Coffee in Silverton. Owned and operated by husband-and-wife duo Emily and Nate Henderson and their business partner Erin Fay, Good Spoon serves up unique and all-natural flavors. After the Hendersons married in 2020, they dreamed of opening a small business together. Both ice cream aficionados, they decided to go to “ice cream school” in Idaho with the goal of bringing their skills back home to Cincinnati. Customers can choose from 16 different homemade flavors that range from traditional, like cookies n’ cream and pistachio, to signature flavors like the St. Looey Gooey – a cream cheese-based ice cream with caramel swirl and vanilla poundcake. 10235 Summit Parkway, Blue Ash, goldspooncreamery.com.

Popular Cincinnati brunch spot Sleepy Bee Cafe has officially opened a location in College Hill. Sleepy Bee, which offers brunch and lunch options focused on fresh local ingredients, opened its newest location on Aug. 21 as part of the $9.5 million project that is looking to revitalize College Hill, the KeyMark development. The Sleepy Bee location is situated inside of what was a vacant “Furniture Store Building” on Hamilton Avenue. This new spot will be serving all the favorites from buttermilk pancakes to avocado toast to breakfast sandwiches, plus plenty of vegan and vegetarian options. 5920 Hamilton Ave., College Hill, sleepybeecafe.com.

As of Aug. 31, woman-owned bakery Maya’s Bakes has opened on Elm Street in Findlay market for a limited time. Owner Kemaya Molden will be serving up her sweat treats that she has been perfecting in her 20 years of baking experience. Maya’s Bakes was previously an outdoor market vendor and is part of Findlay Kitchen— a nonprofit that focuses on supporting local food entrepreneurs. Molden bakes delicious homestyle treats that anyone can enjoy at the pop-up, as well as through DoorDash and local restaurants Embers and Trio Bistro. Maya’s Bakes will be open at this location until the end of the year. 1811 Elm St., Over-the-Rhine, mayasbakes.com.

Northern Kentucky chain Barleycorn’s recently opened its first brewhouse. Barleycorn’s Brewhouse officially opened on Aug. 15 in Wilder, Kentucky. The spot, which was previously a fire station, is described as a “new twist on a classic, hometown brand.” The brewhouse focuses on featuring local craft beer and food plus its own house-made brews and eats from the test kitchen. There’s also a small selection of signature cocktails that range from the Bloody Mary to the Old Fashioned. The menu is loaded up with bar food classics with appetizers like deep-fried cheese sticks and chips and queso, as well as sandwiches like the dijon turkey club, fried fish and cheeseburger. 402 Licking Pike, Wilder, barleycornsbrewhouse.com.