'Cincinnati Goetta: A Delectable History' is a New Book About This Classic Cincinnati Dish

The book covers the origins, local and regional history, progression and recipes for Cincinnati goetta 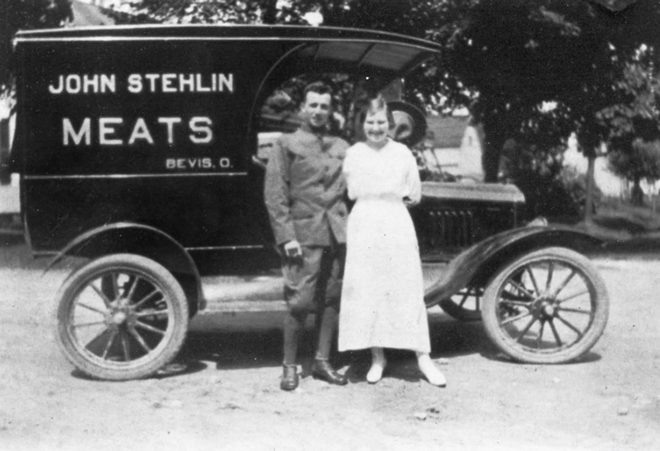 PHOTO: Courtesy of Stehlin’s, Reprinted by Cincinnati Goetta by Dann Woellert (Arcadia Publishing, 2019)
John Stehlin and his wife, Eleanora, in 1920

When it comes to the appreciation of unique foods that other regions just don’t seem to “get,” the Queen City has a culinary reputation all its own. But that distinction goes beyond Cincinnati-style chili. History Press has just published Cincinnati Goetta: A Delectable History, a tell-all diving into everything you wanted to know about goetta, a meat and grain sausage with German roots. Tackling the subject is Cincinnati resident and food etymologist Dann Woellert.

Cincinnati has its share of goetta enthusiasts, goetta festivals and you’d be hard-pressed to find a greasy spoon in Greater Cincinnati without it on the menu. But there’s more than flavor behind the dish; there’s a whole lot of heritage.

The book covers regional complements, the dish’s newfound resurgence and its historic roots, including goetta’s arrival in Porkopolis. Woellert discloses that at one point a large section of Over-the-Rhine was known as “goetta alley.” Sander Packing is mentioned as the first commercial goetta producer on record. And other chapters focus on family histories of household-name goetta producers like Covington's Glier’s Goetta and Camp Washington's Queen City Sausage, as well as butchers like Colerain’s Stehlin’s Meat Market (seen in the photo above), the inventor of pinhead oatmeal (a necessary goetta ingredient), Goettafest and close goetta cousins.

Yes, we’re not the only area to enjoy this breakfast treat, and hints of goetta’s genetic code pop up beyond our immediate region. Woellert mentions gritwurst in the upper Midwest, livermush in the Carolinas, scrapple in the Northeast, jitrnice in south Texas, balkenbrij in western central Michigan and boudin in Louisiana.

“In my book, I talk about creating the Ohio Goetta-Grits-Prettles Trail,” Woellert says. “Goetta has two close siblings in two Ohio counties that follow the path of the old Erie Canal: grits (meat grits, not cornmeal) are native to Auglaize County, the area around Minster, Ohio, and prettles (pork, spices and oats) are native to Henry County in the area around Napoleon, Ohio. Both areas were settled by German immigrants from Northwestern Germany, where goetta’s ancestors hail.”

In researching the new book, Woellert also sought out the oldest goetta recipe he could find and was surprised to discover “almost limitless variations on spice, cooking methods and how to dress goetta,” he says. Modifications include switching out ingredients to make the final product a bit more healthy or adding a host of spices to significantly raise the heat. He notes that aside from the core ingredients, goetta can be prepared in an almost “unfathomable” number of ways. He includes a chapter called “Goetta Recipe Redux.”

That recipe experimentation continues today. Camp Washington Chili recently introduced a “513 Way,” incorporating Queen City Sausage goetta as the base of a 5-way.

Woellert has become something of a local authority on food history. His previous books include Historic Restaurants of Cincinnati, The Authentic History of Cincinnati Chili and Cincinnati Candy: A Sweet History. He also writes a blog that serves up bite-sized takes on food trends and discoveries; recent posts include topics like “Why There’s Red Pop at Juneteenth” and “The Sauerkraut Ball Dilemma.”

With all of this to-do about goetta, one can’t help but ask Woellert if it’s destined for greater popularity in other major cities.

“It remains to be seen. Both Glier’s and Queen City Sausage, our region’s largest (goetta) producers, say Dayton, Ohio doesn’t ‘get’ goetta,” he says.

“It’s my goal to have national food writers begin to describe scrapple as goetta with cornmeal, (rather than referring to) goetta as scrapple with pinhead oats,” he says.

Lofty aspirations for sure.

And Woellert is a long way from running out of unique dishes to champion. Whatever the next book is, it’s bound to be uniquely Cincinnati.

Cincinnati Goetta: A Delectable History is available at arcadiapublishing.com.