Riverview East Academy was placed on lockdown Dec. 1 after a gun threat was made against the school. 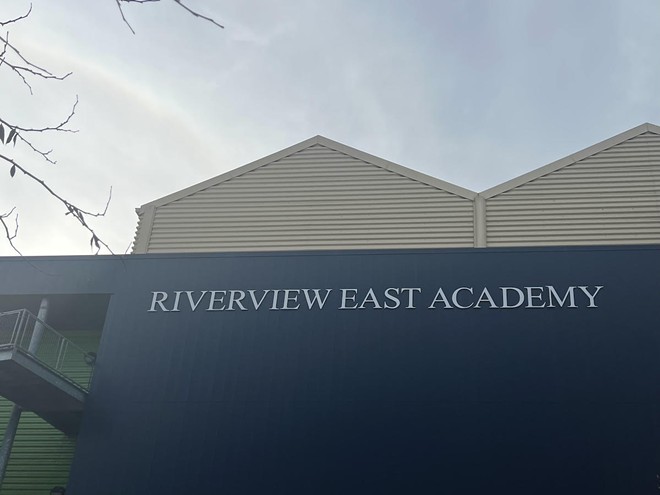 Photo: Madeline Fening
Riverview East Academy is the latest Ohio school to go on lockdown for threats of gun violence. Police found no weapons at the school, but said the students involved have been identified.


Riverview East Academy was placed on lockdown Dec. 1 after a gun threat was reported to the school, eliciting a SWAT response.

Cincinnati Public Schools announced the lockdown on Facebook around noon. “Riverview East Academy is in lockdown as a precaution. CPD [Cincinnati Police Department] is actively investigating the situation. Please do not come to the school. We will provide another update in 5-10 minutes,” the post read.

Thirty minutes later, CPS posted an update, saying no weapons were found on the campus, which is in Cincinnati’s Columbia Tusculum neighborhood. The Cincinnati Police Department kept the school on lockdown as a precaution.

Around 1:50 p.m., CPS announced an all-clear for the school. Interim Cincinnati police chief Teresa Theetge told reporters that officers located the students responsible for the threat.

“We got information that there was a student here that was potentially armed with a gun, we responded as if that information is verified [...] the individuals were in school at some point, however when we got here they were already gone. We’ve located them off site and we’ll be talking to them in just a few minutes,” Theetge said. “This stems from a conflict between some students from yesterday, kind of spilled over into today, and so we’re going to be talking to them about that.”

CPS did not send students home after the lockdown but said parents could pick up their children if they wished.

Rickya Gray was one of those parents who opted to take her kids home. She told CityBeat she’s sick of the constant worry of gun violence in schools.

CPS said in one of its social media updates that students at Riverview East Academy would have a chance to eat a bagged lunch after the lockdown was lifted.

Gray has two kids attending Riverview East Academy – one in second grade, the other in fourth. When CityBeat asked about the lockdown, Gray's fourth grader thought of her friend first.


“My friend was crying,” she said.


CPS said in its final social media update that the district's crisis team will be onsite at Riverview East Academy for the remainder of the week.

Swatting involves making a false emergency call to get a SWAT team response. Rep. Kevin Miller, R-Newark, said swatting against schools is on the rise.

“We have recently seen a rise in several swatting incidents occurring in our schools around the state,” Miller said.

CityBeat asked the Cincinnati Police Department, Cincinnati Public Schools and the Hamilton County sheriff's office for an official number of swatting incidents for the 2022 school year but did not hear back by press time.

CityBeat asked Gray if she thinks there is a solution for the routine threats of gun violence against schools. She did not hesitate with her answer.

“Homeschool these kids,” she said.