Cicadas Are Coming: Your Guide to the Soon-to-Emerge Brood X

Everything you need to know about cicadas — including how many there will be, how to eat them and what to wear to keep them off of you The class of periodical cicadas, “Brood X,” will begin surfacing in early May to partake in what Gene Kritsky, Ph.D. calls a “generational event” for many residents in the area.

Brood X (as in the Roman numeral for “10;” a 19th-century entomologist assigned Roman numerals to different periodical groups) is the largest of all the 17-year cicada broods. Also known as Magicicada septendecim and “Pharaoh Cicada,” we last saw them in 2004.

"For people who have been around awhile, they will remember what it was like 17 years ago or even farther back to when they were kids, and they'll know what to expect," Kritsky, the dean of behavioral and natural sciences at Mount St. Joseph University, says. "For those who weren't alive 17 years ago or who were too young at the time and can't remember, they are in for quite an experience."

Kritsky is a prominent entomologist who recently published Periodical Cicadas: The Brood X Edition and is the local cicada expert. He’s renowned across the country for his dedication to the study of all things cicada-related since 1976, when he led his first project to map out the distribution of Brood XXIII in Illinois. Originally from North Dakota, he moved to Cincinnati in the 1980s for three things: “Major League Baseball, trilobite fossils (and) periodical cicadas,” he says. Cicadas in Brood X will emerge throughout 15 U.S. states this summer, including in nearby metropolitan areas such as Indianapolis, Louisville, Lexington, Columbus, Dayton and, of course, Cincinnati.

“When I did the census numbers in 2004, I had as many as 356 (cicadas) coming up per square yard in Delhi and around 200 to 250 coming out per square yard in Hyde Park,” Kritsky says. “These square yards (were) under canopies of trees, not out in open areas that are clear cut, but you look at how much acreage that is going to be and you're going to see literally millions of cicadas just in parts of Cincinnati. And when you count the number of eggs laid in each tree, each tree probably had about 40,000 eggs. There's a high mortality underground, but that's still several thousand cicadas under every tree.”

A lot of media sources have a tendency to warn their audiences of an impending cicada emergence as if the insects were an invasive swarm of locusts, prompting people to anticipate an apocalyptic wave of buzzing madness sure to destroy the livelihood of their otherwise quiet communities. But this is way off the mark.

“They are an integral component of the Eastern Deciduous Forest. They're not a keystone species, in that if the cicadas go extinct the whole forests won’t collapse, but they do provide a lot of benefits to the eastern forests,” Kritsky says. “For example, when they emerge from the holes in the ground, those holes are like a natural aeration. So, when it gets warmer in the summer and when it rains, instead of that rain sort of draining off the surface, it actually goes down those holes and waters the trees.”

And Kritsky says periodical cicadas are important to a region’s ecology. The insect lays its eggs in trees, which prompts a “natural pruning” that increases the amount of flowers and fruit in the following years. After their deaths, the cicadas’ bodies decay and contribute a substantial amount of nutrients to the soil.

“There was a paper published in the 1890s titled ‘How Out of Evil Cometh Good’ and it was all about how cherry growers were having a bumper year because of the cicadas the year before,” Kritsky says. 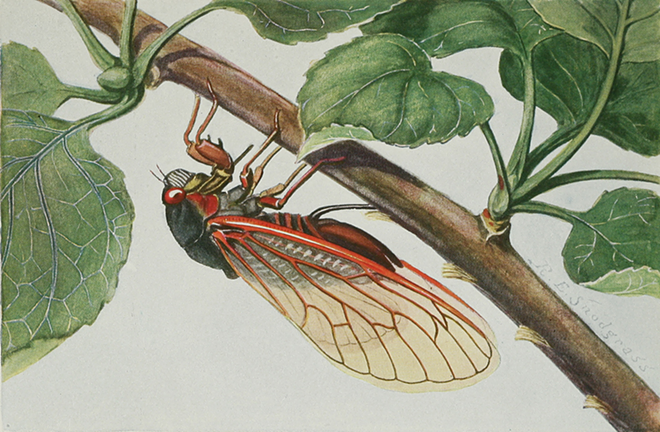 Illustration: R.E. Snodgrass/Public Domain
An illustration of a female periodical cicada (Magicicada septendecim) inserting eggs with her ovipositor into the under surface of an apple twig

But Kritsky isn’t just a researcher. He has developed an interactive way for cicadas to remain on scientists’ radar while also encouraging engagement from local citizens.

He created the Cicada Safari app in partnership with the Center for IT Engagement (CITE) at Mount St. Joseph University. The app allows users to search, photograph, record and map cicadas in their area. Once a user submits their findings, scientists will then verify the cicada by studying the photograph or video. Following verification, the cicada will be included in Mount St. Joseph University’s cicada map. (Make sure your location services are on before snapping a photo or video so the team can get an accurate latitude and longitude.)

“You go around and look for cicadas, and when you find one, at the bottom of the app, there's a little button that you push to turn on your camera and you photograph the cicada,” Kritsky says. “My colleagues at CITE and myself, we look at every single photograph. And then if it's accepted, it goes on the map.

“We ask our users, our scouts, when you hear cicadas calling in your area, to take a video for 10 seconds of the calls. Because from the calls, I can tell you what species are present.”

Kritsky claims this information will move scientific research forward by determining the cicada distribution and population status across the region.

“As strange as it may sound, periodical cicada broods can go extinct,” he says.

An example, Kritsky says, are the cicadas from Brood XI, which emerged in enormous numbers for centuries prior to becoming extinct in 1954.

In addition to this tracking system being a vital tool of scientific research, the app is also an engaging way for members of the community to spend time outside during the warm summer months.

"We developed this app because so many people are fascinated by cicadas," Kritsky says. "This is true citizen science.”

Using the public to gather information about cicadas isn’t just a new-age technology.

“The crowdsourcing of information to study cicadas goes back to the 1840s,” Kritsky says.

He tells of a researcher in the 19th-century who would write newspaper columns to verify the location of 13-year cicadas by asking people to submit sightings to him. “Not only did he ask for records to be sent to him, (but) he offered to return their stamps,” Kritsky says.

In the 1890s, the United States Department of Agriculture began sending postcards to school superintendents, railroad conductors and mail carriers requesting that they report cicada sightings. And, before his app, Kritsky himself set up a hotline when Brood X emerged in 1987.

“I had an answering machine with a hotline number that people could call when Brood X emerged and it broke the machine in the first hour. It literally jammed,” he says. “And then when Brood X came out in 2004, I had a website asking people to send me emails. I was getting an email a minute — one day I had 600 emails.”

So why are people so fascinated with these insects?

“They’re bugs of history,” Kritsky says. “In ’87, I had a woman call the answering machine and I ended up talking with her. She remembered distinctly in 1936, a cicada landing on her brother's nose that she knocked off with a baseball bat and broke his nose. Seventeen years later, 1953, she's married and she's got a daughter who's 3 or 4 and she was out with her daughter looking at the cicadas and telling that story. (In) 1970, with her grandkids — it’s the story being retold every 17 years.”

Locals who want to join the safari trip can download the free app from the Apple app store or Google Play. Folks also can learn more about cicadas through fact sheets, maps and activities by visiting cicadasafari.org.

How to Eat Cicadas

Cincy Shirts Lets You Wear Your Cicada Love On Your Tee