Senior Sammy was adopted after his birthday party, but the shelter has plenty of older cats in need of a home in the renamed "Sammy's Senior Center." 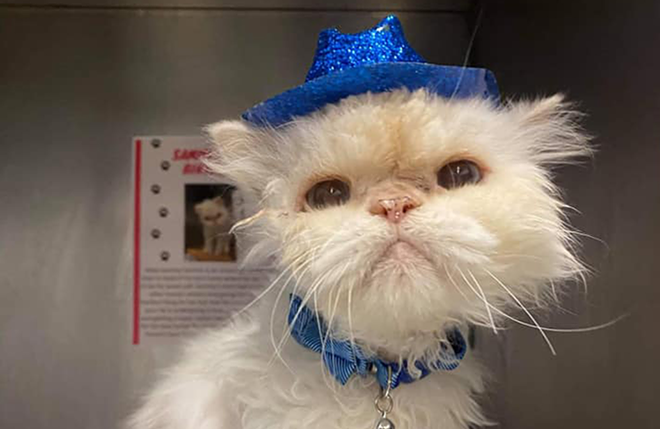 One senior feline got a super special birthday party this week at Northside's Cincinnati Animal CARE. And the nation took notice.

"Senior Sammy" turned 19 years old on Tuesday, and Cincinnati Animal CARE celebrated him in style with special food, singing and, of course, a jaunty hat.

The internet went wild for this sweet senior, and his story was featured on local and national media outlets, including HuffPost.

"We found out Sammy's birthday was this week when his previous owner surrendered him to us," Cincinnati Animal CARE Media and Community Relations Manager Ray Anderson tells CityBeat. "The idea to do the party was entirely the idea of the Kitty City staff. I don't think they thought it would blow up like this though!"

Anderson says Sammy was brought to the shelter on June 7 after his owner had to surrender him to go into assisted living. While that's not the case for all senior cats at the shelter, Anderson says situations like that are a "fairly common occurrence."

"We have about 10 senior cats in the shelter right now and more in foster," he says. 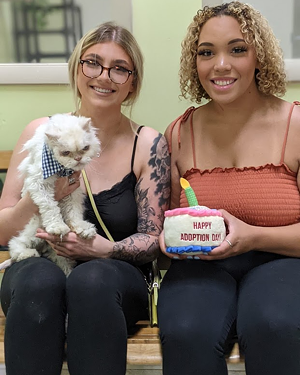 After the shelter shared his story — and adorable photos of him in his birthday get-up — Sammy was adopted the next day. And his new mom has already bought him a new hat.

"I have a soft spot for these older pets, they need some good TLC," the adopter told Cincinnati Animal CARE. "I rescued my 17-year-old senior cat off the streets after someone declawed her and left her outside. The situations they come from are just what draws you in, you want to give them the best moments they have left! Just being able to keep them comfortable and happy. He’s doing great at home, he’s very interested in our bunny Trixie and he loves his little house we have!"

But Sammy isn't the only senior kitty in need.

Anderson says the cats in the new room are all 10 years or older.

"It won't be a permanent fixture, but we hope it'll get our abundance of seniors into homes this week," he says.

And it seems to have worked. At least one senior kitty — at 12-year-old who had been at the shelter since March — was adopted by one of the staffers.

Take a tour of Sammy's Senior Center below.