Behind the Scenes of the Dent Schoolhouse, One of Cincinnati's Most Horrifying Haunted Attractions

Dent Schoolhouse has become an iconic part of spooky szn in Greater Cincinnati and is nationally renowned as one of the scariest haunted houses in the country. Learn what a typical night is like for the actors that make Dent come to horrifying life. Photo: Olive Wright
The costume closet, managed by Maggie Ewing, is a well-organized corridor of terror after terror, housing all the masks used in the attraction.

It is 6:47 p.m. on a Saturday in mid-October when the wind picks up and the chainsaws begin to rev; 7:05 p.m. when the fog rolls in and shrieks of terror begin to float out of the two-story red brick schoolhouse. Zobo the Clown cackles in the distance as the Lady in White convulses in the path of the nervously giggling customers who are streaming in. It is the busiest night of the year at Cincinnati’s infamous Dent Schoolhouse and the festivities are off to a blood-curdling start. The weather isn't too hot or too cold and it's close enough to Halloween to feel spooky, so the willing victims are arriving in droves.

Rewind just three hours and the scene at the schoolhouse is far less scary. Well, it’s still pretty creepy, but not nearly as intimidating.

Actor Jennifer Hoffman casually snacks on popcorn as her makeup artist creates a cluster of bulbous pustules on her forehead. Hoffman is in the process of becoming the “trash worker,” who is tasked with disposing of the corpses that pile up on the grounds of the Dent Schoolhouse. She is sitting back to back with Michelle Sierra, the “Levitating Woman," whose body paint makes it look like she is dripping with mold and decay from hours of possession in a necromancer’s basement chamber.

The two women become uglier and more grotesque by the minute.

“You’ve never looked younger,” someone jokes as Hoffman smooths the greasy tangles of hair sprouting out of her almost-bald cap.

The mastermind behind these creatively disturbing looks is Aryn Fox, a Cincinnati native who is a tattoo, makeup and special effects artist and the second runner-up of Season Two of GSN’s body painting competition TV show Skin Wars. Fox’s work station is complete with hot glue guns, hair dryers, prosthetics, masks (some costing up to $600), body paint, charcoal powder and candy corn for a festive snack.

She looks seasonally witchy as she walks to the sound system in her knee-high boots and floor-length purple cardigan to queue up a spooky soundtrack, starting with “This is Halloween” from the Tim Burton film The Nightmare Before Christmas.

The costuming and makeup process begins more than two hours before the Dent Schoolhouse opens for the night, with a team of 12 makeup artists tactfully turning smiling faces into unrecognizable monstrosities.

Nothing is more entertaining than guessing what these giggling, popcorn-eating people will become in a few short minutes. Most characters won’t take longer than 15 minutes to create. Fox says that her time on Skin Wars taught her timing and efficiency, which is of course useful when you are painting (and mutilating) the faces of upward of 30 people a night.

Fox says that her favorite type of effect she does for the schoolhouse is when she “makes black ick drip from all orifices."

Though the hair, makeup and costuming are wildly impressive, those aren’t the only elements that go into creating these creatures. The actors all agree that it is an intensely physical job as well. The cast has a thread in their Facebook group in which they compare the bruises they have earned while on the job from convulsing, contorting and creeping around in the dark.

“My whole upper arm is covered in bruises from flailing. They’re badges of honor,” Sierra, the Levitating Woman, says proudly. It takes lots of preparation to avoid the other physical discomforts of the job. A weather check determines how many layers the actors will choose to wear, as the schoolhouse has no heating or air conditioning.

Lots of actors will pass out from dehydration the first weekend of the season due to the heat but will be in turtlenecks and tights and still shivering underneath it all by the last.

The actors also say it is a balancing act to make it through the night of performing: to stay hydrated enough to not get a dry mouth, but to not drink so much that you leave to use the restroom too many times. To curb these dilemmas, costume manager Maggie Ewing will sneak Jolly Ranchers and throat lozenges to the actors while she goes through the house mid-shift to check up on costumes to help avoid sore throats.

Many of the make-up artists will also serve as “breakers” and take the place of an actor for 10 minutes at a time so that they can get some relief from the exhausting and often uncomfortable job. Actors are stationed at the schoolhouse from open to close, with hours depending on the day; the earliest the attraction opens is 6:30 p.m. on "busy" Saturdays and the latest they stop selling tickets is midnight on weekends. That being said, sometimes the actors won't get out until after 1 a.m. because of how long the line is.

Regardless of when they arrive or leave, the actors and breakers use a maze of all-black hallways to move throughout the house, and it is almost as unsettling as the rooms themselves.

Many actors will request to not be stationed in a room alone. Even though a good portion of the scariness of the house is manufactured by props and sets and actors, the employees know that the schoolhouse itself is the scariest part. Legend has it that the Dent Schoolhouse — a literal former schoolhouse on Cincinnati's West Side — is haunted by the spirits of children who were allegedly murdered by the school's janitor, Charlie McFee, in the early 1950s.

The actors will be the first to admit that they have had their fair share of unsettling supernatural experiences while on the job. And during the season, Dent offers real ghost tours sans props and actors, instead guiding guests through the building detailing the history and myriad paranormal experiences people have had inside.

This season, Sierra and her scene partner, Caleb Jacobs, were shaken to their cores when they simultaneously felt an unseen presence in the basement (where they are stationed) with them late one Saturday night.

“I was just lying there on my levitating table and I felt someone hit the table on my left side and the whole thing shook. I bolted straight up and started freaking out,” Sierra says.

“I was telling her a story in between groups of guests and I saw a small white orb floating down next to me,” adds Jacobs. “I thought it was sweat at first, I brushed it off like it was nothing, but then two seconds later she popped up saying that something hit the table."

“Some nights when we’re down there, we feel fine. And other nights are just super uncomfortable," Sierra says. "Just last night we kept smelling sulfur, which is usually the sign of a malevolent spirit.”

Sierra has taken to wearing a cross under her costume to help soothe the nerves. According to Jacobs, the spirits are more active during Lights Out weekend “because they like to play around in the dark.” 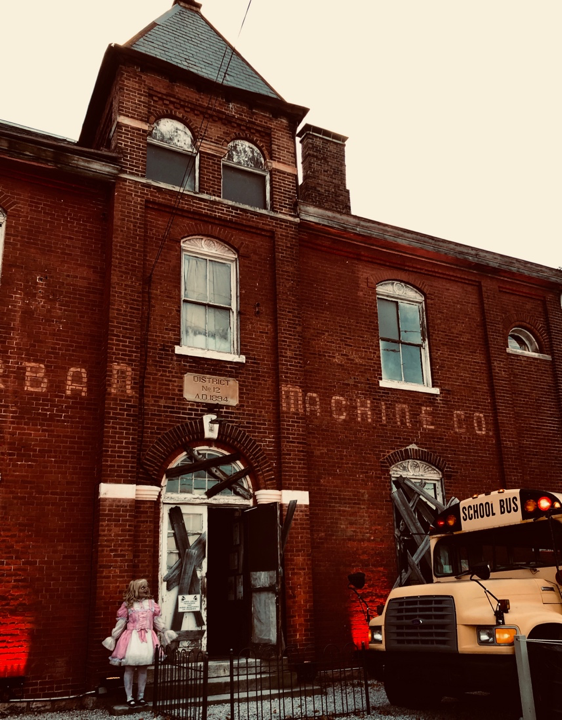 Photo: Olive Wright
The exterior of Dent. Princess Petunia, a snot-caked “brat,” greets guests as they walk into the house.

Lights Out weekend takes place the first weekend of November and it lets guests experience the house in a whole new way. With only strobe lights and glowsticks to guide them, guests can opt to let the actors grab them from the shadows, indicating whether or not they want the added physical scare via the color of their glowstick.

The lower two floors of the Dent Schoolhouse are terrifying even with the lights on. (The first floor and the basement are dedicated to the attraction and upstairs houses the green room, office and makeup and costuming.) Fake children’s corpses swing from the ceiling; mutilated bodies are strewn over rusty gurneys; spiders, snakes and clowns creep in the corners. Every turn of the maze reveals new horrors: There is a room for every fear or phobia you could imagine.

Sierra nonchalantly makes her way through a chamber of seemingly haunted dolls suspended from the ceiling. “You get used to it,” she says with a shrug and a smile, but by this point she is in full costume and makeup so her rotten teeth and hollowed-out cheeks don’t create the most comforting of grins.

The fun (and fright) doesn’t end at the conclusion of Halloween: The Dent Schoolhouse hosts "A Christmas Nightmare" for two weekends every December, which follows the same basic formula as the haunted house with an additional demonic Santa character and Santa hats for all the corpses.

But tonight, with waits estimated to get up to four hours long, the Dent Schoolhouse and all of its actors (and purported spirits) are in full Halloween mode. A group of women who are self-proclaimed “Hillbilly Haunt Hunters” are excitedly making their way into the attraction — they drove from West Virginia, Tennessee and Alabama to attend.

Zobo and the Lady in White (actors who are engaged in real life) team up on a group of teenage girls, one of which immediately drops to the ground in fear. An actor dressed as janitor Charlie McFee stares silently at passersby, occasionally swinging his wrench within inches of the heads of men who don’t look scared enough for his liking. The sun begins to set over the scariest place in Cincinnati and the screams grow louder by the second. It will be a night to remember... if you can make it out.