The team's first major change in 17 years simplifies the shoulder stripes and updates the pants. 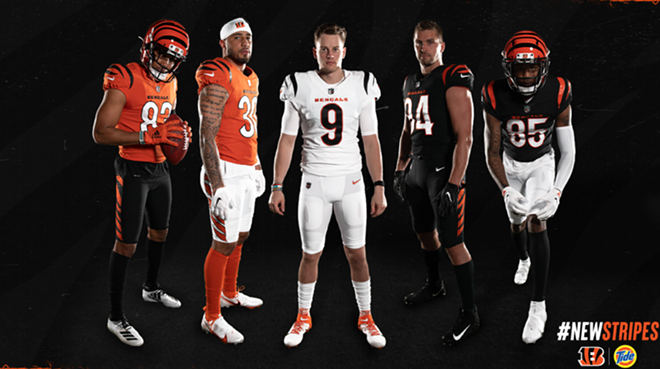 Photo: twitter.com/bengals
The Cincinnati Bengals' "new stripes" uniforms will debut for the 2021 season.

The Cincinnati Bengals finally shared the team’s new uniforms with a roar on Monday.

After several years of development, a few months of teasing #NewStripes and a presumed leaked jersey design on eBay in March, the Bengals revealed the real thing on April 19. It marks the Bengals’ first major uniform change in 17 years, with only the iconic striped helmet left untouched.

There are three new jersey designs from Nike: primary black, primary white and an orange alternative, along with matching pants. The recognizable stripes on the jersey’s shoulders were simplified and the color blocks were removed.

“Utilizing the fan-favorite, flooded-white Nike Color Rush uniform as the base, our goal was to modernize the Bengals' uniform as a bold, aggressive and timeless design,” Nike representatives said in a news release. “We observed real-life Bengal tigers in motion and redrew the uniform's stripes to mirror the tiger's movements while stalking its prey. The result is a faster on-field expression for one of the league's most distinctive uniforms.” 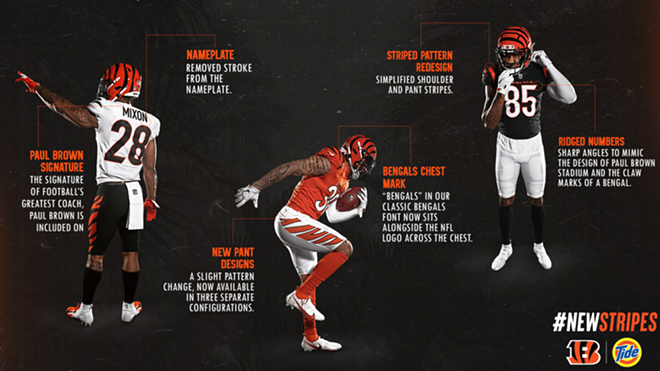 The design features "Bengals" written across the chest, while the legacy of Paul Brown, the team's founder and first head coach and general manager, is honored with a subtle signature detail inside the back neck of the jersey.

The jersey numbers are classic with a twist, with inspiration drawn from the Bengals' uniforms of the 1980s. The team preserved the outline of the numbers, while adding a sharp angle to mimic the modern design of Paul Brown Stadium and the claw marks of a ferocious Bengal tiger. And in keeping with a sleek and simpler thematic, the stroke from the nameplate was removed.

The Bengals saturated social media channels with the new uniform on Monday, showcasing photos and videos that feature team members wearing the designs.

In one video, teammates ride an elevator up to a concrete loft or parking garage decked out with green and orange plants. There, former wide receiver Chad Johnson awaits them on a throne, smoking a cigar. “Let’s suit up,” he tells them. Jessie Bates III, Sam Hubbard, Tyler Boyd, D.J. Reader, Jared Murphy, Joe Mixon and Joe Burrow are featured.

“These uniforms excite me. They're cool,” Burrow said in the release. “I think the fans will like them and they'll be good for us. The guys that are here are the kind of people that are going to take this organization to where we want to go. We're the future. It's going to be a fun ride.”

“I love the new look. Hopefully these jerseys bring energy, not just to our fan base, but to the city overall,” Bates added. “These new stripes come with new standards and new goals. We're looking forward to a lot of great things.”

Watch the video below and learn about the new uniforms at bengals.com.