Rosie beats out division rivals Pirate Parrot of the Pittsburgh Pirates, Bernie Brewer of the Milwaukee Brewers and Fredbird of the St. Louis Cardinals. 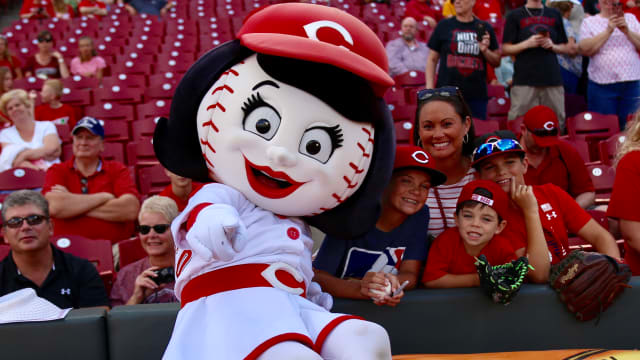 Although plenty of Cincinnati Reds fans may find the Muppet-like Gapper to be one of the franchise's more endearing (and comically expressive) mascots, another one of our baseball team's four anthropomorphic entities has him outranked.

Rosie Red has placed in the top 10 most popular mascots in all of baseball, according to a recent Play USA survey.

Responses from 2,000 Major League Baseball fans across the country put her at No. 8 on the list, ranking her higher than rivals Pirate Parrot of the Pittsburgh Pirates (No. 17), Bernie Brewer of the Milwaukee Brewers (No. 19) and Fredbird of the St. Louis Cardinals (tied for No. 19).

The Chicago Cubs' Clark the Cub was the most beloved mascot, followed by the Detroit Tigers' PAWS and the Colorado Rockies' Dinger.

The most hated? Not surprisingly, it's the Phillie Phanatic. (Fun fact: According to Reds mascot coordinator Nick St. Pierre, the team's Gapper suit was designed by Dave Raymond, first inhabitant of the Phanatic.)

Rounding out the top five most obnoxious mascots are the Arizona Diamondbacks' Baxter, the Cleveland baseball team's Slider, the San Diego Padres' Swinging Friar and the Atlanta Braves' Blooper.

According to the Reds' bio of Rosie, she attended CHEER — the College for High Energy and Entertainment Routines — and loves both dancing and air guitar. Her favorite song is "ABC" by the Jackson 5 and one of her career goals is to encourage other girls to play baseball.

Rosie was introduced as a mascot in 2008 and is the icon for Rosie Reds, a self-described "philanthropic and social organization focused on supporting the Cincinnati Reds." The group — originally women-only — was formed in 1964 when then-Reds-owner Bill DeWitt was considering moving the National League franchise out of Cincinnati.

Rosie is an acronym for "Rooters Organized to Stimulate Interest and Enthusiasm" in the Cincinnati Reds.