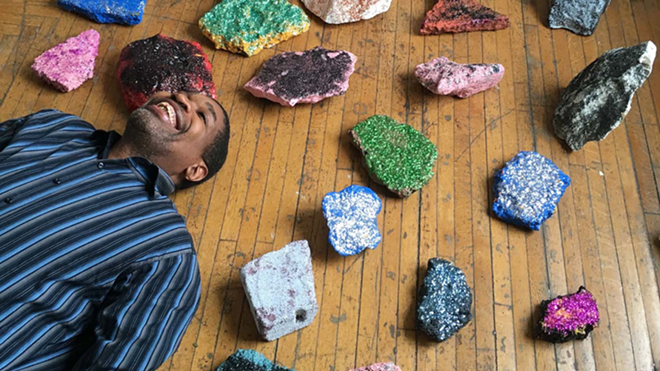 Courtesy Visionaries and Vocies
Curtis Davis with a few of his sculptures.

Cincinnati-based artist Curtis Davis received a shout-out in this week's issue of The New Yorker for his current solo exhibition in NYC's White Columns gallery, which was made possible thanks to a crowdfunding campaign conducted by local nonprofit Visionaries + Voices.

That GoFundMe campaign raised over $3,500, making it possible for V+V — a nonprofit organization that provides resources to more than 125 artists with disabilities — to send Davis's works to White Columns, cover his and his independent provider's travel expenses and allow for a V+V staff member to go with them.

The show — which runs through September — focuses on Davis's sculptural works, which he creates by coating several layers of paint over found objects like logs, rocks and dolls. When asked by CityBeat's Jude Noel what he tries to convey through his art, he replied: "Everything." Which isn't an exaggeration. As Noel wrote, his "body of work really does seem to encompass the entire breadth of his imagination."

Johanna Fateman wrote a short review of the show in The New Yorker's "Goings on About Town" section for their current issue — which is a big deal. Fateman writes:

"Breadbox-size constructions coated in thick layers of acrylic paint, as if dipped in cookie icing, have a curiously magnetic presence in this Cincinnati-based artist’s first New York solo show (presented in collaboration with the nonprofit arts organization Visionaries + Voices). Arranged on utilitarian tabletop platforms, Davis’s sculptures, composed of humble materials — rocks, scrap wood, pinecones — have simple silhouettes that recall modernist maquettes and architectural models. The vaguely propulsive, matte-green 'Tree Log' might be the star of the show, resting casually atop a piece of warped cardboard. The artist’s small, scratchy flower paintings are a little less wonderful, but they succeed as charming, understated foils to Ed Baynard’s pristine watercolor compositions of vases and blooms, which are the subject of a concurrent show."

This is the second time White Columns, which has a 15-year history of collaborating with organizations that support artists with disabilities, has exhibited an artist from V+V, the first being Dale Jackson in 2017.