"George Remus: A New Musical" blends murder, mobsters, millionaires and plenty of alcohol, all against the backdrop of Prohibition. 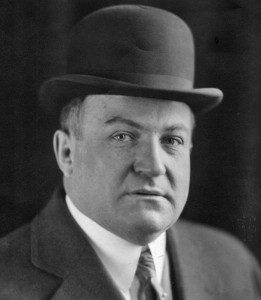 Infamous Greater Cincinnati bootlegger George Remus — rumored to be the inspiration for F. Scott Fitzgerald's Jay Gatsby — is getting the musical treatment by local theater company The Carnegie.

With music and lyrics by Janet Vogt and Mark Friedman and a book by Joseph McDonough, George Remus: A New Musical blends murder, mobsters, millionaires and plenty of alcohol, all against the backdrop of Prohibition.

“Prohibition remains a fascinating period in American history and the rise of organized crime, cult heroes and infamous figures,” says Maggie Perrino, theater director for The Carnegie, in a release. “George Remus examines the story of a man pursuing his version of the American Dream with, given his local connections, make for a unique regional story.”

The staged reading follows Remus from his youth as a poor German immigrant in Chicago to his stint as a pharmacist and lawyer to his rise as one of America's most notorious bootleggers, stationed right here in Cincinnati.

"Powered by his perfect scheme for selling whiskey by the barrel, he became ‘the’ supplier to many a speakeasy during Prohibition, leading to a lavish mansion and lifestyle befitting a millionaire playboy in 1922," says The Carnegie.

But it all came crashing down, with arrests, jail time and the murder of his wife Imogene, whose ghost is still rumored to haunt the gazebo at Eden Park.

For $35, you can add on an "exclusive bourbon experience" with Covington’s Revival Vintage Bottle Shop. The cost includes a self-guided bourbon flight and show admission.

Tickets can be purchased at The Carnegie box office noon-5 p.m. Tuesday–Friday, by phone at 859-957-1940 or online at thecarnegie.com. The show is not recommended for those under the age of 13.