In "F9," Tyrese Gibson and Ludacris go into outer-fucking-space in a goddamned car, and they survive — with no training and no spacesuits. 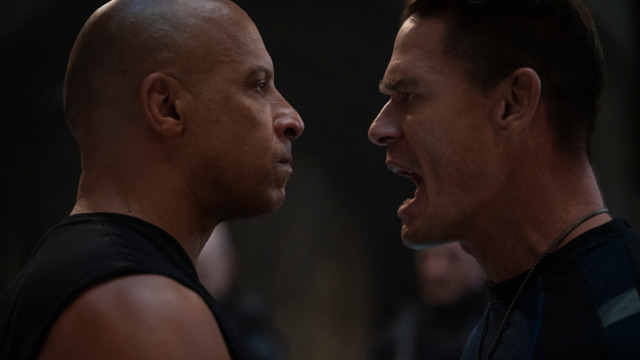 If you were wondering whether The Fast and the Furious franchise could stand on its own for a second film without founding member Paul Walker (who died in 2013) or its first installment since 2011 without Dwayne Johnson, then prepare to get your answer with F9: The Fast Saga.

Not only is this ninth (!?!) movies in the series a terrible waste of time, but it’s also deadly dull and repetitive. In short, the Fast and the Furious brand needs to be put to bed, retired or pushed out to pasture.

I spent at least 15 minutes while watching an advance screening just trying to write down as many clichés that would aptly apply in this review: Jumped the shark. End of the road. Running on fumes. Out of gas and miles from a coherent plot.

I spent about as much time quietly cursing Vin Diesel and his character Dominic Toretto and his bullshit speeches about family and his perfect unstained white tank top undershirts and the fact that he never dies, never gets injured, never takes a punch to the jaw or shows any pain.

A lot of F9: The Fast Saga feels like nothing more than an attempt to stoke and stroke Diesel’s ego given that every other movie in which he has appeared lately super-duper sucks (minus Marvel’s Guardians of the Galaxy films, which only use his voice).

This movie also does a disservice to Walker’s legacy by still refusing to acknowledge his death and instead acting as if his character Brian is simply off doing other things while the rest of the crew risks their lives to save the world, again, only this time with the help of his onscreen wife Mia (Jordana Brewster), which makes zero sense because she’s supposed to be retired, too, and raising a baby with Brian.

F9 also shows just how rickety this franchise has become without better actors like Walker and Johnson on-hand. And it’s further proof that maybe Diesel shouldn’t be pulling double-duty as both actor and producer, given that he apparently pissed off Johnson to the point that Universal gave The Rock his own spinoff (Hobbs & Shaw) instead of losing his character altogether.

The Fast Saga is the kind of movie where characters actually have conversations on screen about how they never get shot, always survive and never, ever get seriously injured. At one point, Tyrese Gibson’s character actually asks Chris "Ludacris" Bridges’ character if there are invincible.

It’s also the kind of movie that sends Gibson and Bridges into outer-fucking-space in a goddamned car, and they survive, with no training and no spacesuits.

F9: The Fast Saga is the kind of movie that resurrects popular characters who died in past installments, only to tease that they may turn bad in future installments, which again makes zero sense.

It’s also the kind of movie that trots out a host of "guest stars" for no reason other than to have the ability to promote their participation online just to coerce people to pay money to watch a franchise that should have ended with 2017’s The Fate of Furious, which had cars racing a nuclear submarine.

For instance, why is Cardi B in this movie? She literally just shows as the leader of a fake Interpol unit made up of all women that helps free Toretto. She’s onscreen for less than five minutes.

Why is Helen Mirren in this movie? She appears just long enough to get into a car chase and to tell Toretto that he’s her favorite American.

Why is Charlize Theron in this movie? She only appears with a handful of the cast, and none of the core actors, and her character basically slips into the night after her evil plot is foiled.

Why is John Cena in this movie? He doesn’t act, unless you consider scowling to be acting, and he barely has any dialogue because all of the dialogue written for his character is mostly relegated to a younger version of his character in the numerous flashback sequences where we learn why Cena’s Jakob hates Diesel’s Dominic following the death of their father.

To be fair, I actually really enjoyed Fast Five and Fast & Furious 6, which were exceptional action flicks compared to every installment since.

I even liked a good chunk of Hobbs & Shaw, the Johnson-led spinoff with Jason Statham.

But this latest bullshit demands a hard stop. An intervention. Maybe even a little bird to whisper in Diesel’s ear that it’s time to quit while he’s still ahead, and retire Toretto for good.