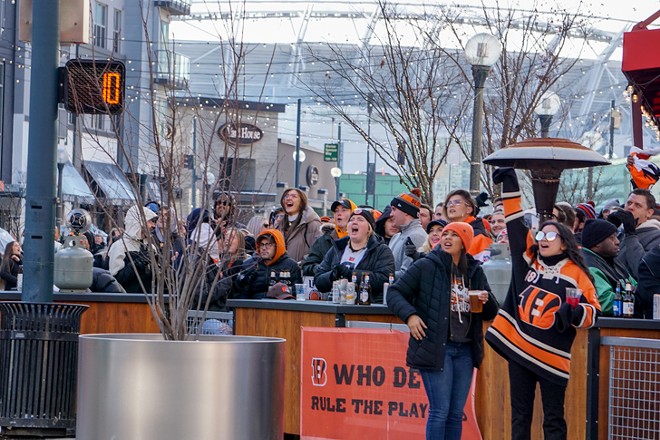 Adam Doty
There will be several Bengals events throughout Cincinnati on Super Bowl weekend.

The NFL may have quashed an anticipated Super Bowl viewing party in Paul Brown Stadium, but that doesn't mean Cincinnati will forego all celebrations.

During a media briefing on Monday, Cincinnati Mayor Aftab Pureval said there will be a number of events for Bengals fans throughout Super Bowl weekend. The Bengals are scheduled to battle the Los Angeles Rams in L.A. on Sunday, Feb. 13.

Pureval and Cincinnati Vice Mayor Jan-Michele Lemon Kearny were joined by Hamilton County Commissioners Stephanie Dumas, Alicia Reece and Denise Driehaus during the Feb. 7 announcement, saying that the county's collaboration and private partners throughout the region were key to coordinating the spate of Super Bowl events.

Though the nation's biggest football game won't be played until Sunday, the group agreed that the Bengals celebration begins Monday night with the free pep rally at Paul Brown Stadium. Tickets for the free event, which will accommodate 30,000 people, Reece said, were all scooped up almost immediately after they became available Feb. 2.

The rest of the events have been concentrated into "zones," as Pureval called them: Findlay Market, Fountain Square, The Banks and Newport on the Levee. Events there are scheduled for Saturday, Sunday or both, with Fountain Square hosting one party on Thursday. Some events are specifically listed as "family-friendly." See the full schedule at the end of this story.

Reece added that local businesses and vendors throughout the area also will be part of the Bengals celebration.

On Jan. 12, as the Bengals prepared to host the Las Vegas Raiders for the AFC Wild Card, local officials urged residents to wear masks and get COVID-19 booster shots if they intended to gather at Paul Brown Stadium or elsewhere for the game.

Officials said Monday that they're already making plans for a victory parade, should the Bengals defeat the Rams this Sunday. Pureval said the city has been in talks with the Bengals, Hamilton County and others to coordinate. He noted that he's spoken with the city manager about the parade route and the Cincinnati Police Department about crowd control. Though it's premature to set a parade date, Pureval said he'd anticipate an event "early next week." Reece added that areas of Hamilton County outside of the Cincinnati limits also may be involved.

Officials said that with the Bengals in the Super Bowl, more people around the country are looking at Cincinnati. Pureval said that the game's economic impact on the city — which already has been in the millions, he noted — means that there's an opportunity to tell Cincinnati's story at cincinnatiexperience.com and elsewhere.

"This is an incredible opportunity for the Cincinnati region to tell the world what we're all about. We've got an incredible story to tell about the innovation that's happening here, the excitement, the growth," Pureval said. "As I've said before, if you can live and work anywhere, I want you to choose Cincinnati."

Previously, local officials had attempted to coordinate a watch party at Paul Brown Stadium for the Bengals' appearance in the AFC Championship on Jan. 23 but could not pull together the logistics in time.

Once the Bengals were locked into the Super Bowl, Officials then tried to coordinate a Feb. 13 watch party for Paul Brown Stadium, but the NFL denied the request on Feb. 2 due to broadcast rights and other considerations.

The Bengals will take on the Los Angeles Rams during Super Bowl LVI on Sunday, Feb. 13. The Rams won the Jan. 30 NFC Championship game to advance with the Bengals, who overcame the Kansas City Chiefs in overtime just hours earlier to become the AFC champs.

The Super Bowl will take place at 6:30 p.m. at the Rams' home of SoFi Stadium in Inglewood (the Bengals will serve as the home team). NBC will broadcast the game, and fans also can watch on Peacock, Telemundo, NBCSports.com and the NBC Sports app.

Below, see the schedule of events in tailgate "zones," as shared in a release from Pureval's office:

Newport on the Levee

Fountain Square will host a weekend full of events – all can be found on their website. See below: