"Optic" is the final piece to a retrospective project highlighting Cincinnati's underground progressive paper of the late 1960s/70s, "The Independent Eye" 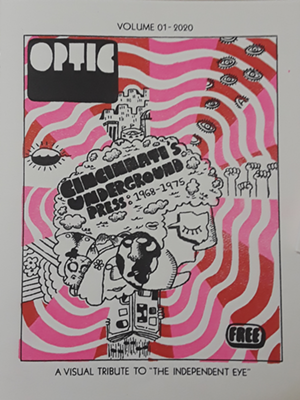 Provided by Mark Neeley
Cover of "Optic: A Visual Tribute to The Independent Eye"

Optic: A Visual Tribute to the Independent Eye is officially on stands at local shops across Cincinnati.

Featuring artworks that pay tribute to Cincinnati's 1960s/70s progressive underground newspaper from 16 local artists, Optic is the culmination of a yearlong retrospective. It follows an exhibition and panel discussion, the latter of which was held last November at the main branch of the Public Library of Cincinnati and Hamilton County. The Eye was also digitized, allowing anyone to “flip” through its artful pages on the library’s website.

The project's origins can be traced to local artist and educator Mark Neeley, whose curiosity brought him to the Main Branch's rare book room in late 2017. It was then that he first encountered issues of The Independent Eye, which was published in Yellow Springs, Ohio in 1968, shortly before moving its base to Cincinnati, where it printed issues regularly through 1975.

Like other underground papers across America, of which there were hundreds, The Independent Eye's pages captured the counterculture movement that proliferated the decade by way of psychedelic art and articles that called for revolution, often with a sarcastic bite. The staff rallied against the Vietnam War, wrote about issues surrounding the civil rights and women’s liberation movements, proclaimed their love for Rock & Roll and championed myriad forms of sociopolitical justice. Like a clenched, raised fist, their mere existence was a symbol of solidarity against “the establishment.”

Neeley would spend the following year searching through the archive and connecting with past staff members, including Ellen Bierhorst, a local psychologist and one of the paper's original founders, to research The Eye's history and impact. Eventually, the idea for a retrospective formed. With Optic, all pieces of the project have come to fruition.

Issues can currently be picked up locally at Shake It Records, Torn Light Records, the Main and Clifton Public Library branches, Wave Pool, Yellow Springs' Dark Star Books — located just down the street from where The Eye was initially published — and Downbound Books. A release party will take place at the latter Feb. 15. Along with free papers, Optic-themed tote bags will be available for sale and light refreshments will be served at the event.

Bringing Optic to realization was a process eight months in the making. Neeley says he initially began trying to secure funding in June of 2019. It wasn't until October that he received news that the project was granted $3,500 by the Carol Ann & Ralph V. Haile, Jr./U.S. Bank Foundation. With that in hand, he was able to pay involved artists for their work. He cites the delay in securing funding as to why there was a gap between the library event and Optic's release.

"It feels extremely gratifying to finally have Optic out on the shelves and accessible to anyone (for free)," Neeley says via email. "We have also been mailing copies all around the country, which is surreal. My hope is that it caps off this whole Independent Eye retrospective project in the most natural way: with a tribute in the form of an actual, physical newspaper."

Following suit with how the original staff laid out issues, Optic was printed without the help of modern technology and through a risograph — a way of duplicating copies from a stencil — by Julia Warner of Cereal Box Studio.

"We stayed so true to the tech-free, analog process of making the paper that my partner Jon Flannery became a regular at the local copy store, piecing things together by cutting and pasting," Neeley says. "Every piece inside was contributed by a unique local artist from all different backgrounds, and I find them to be powerful statements about the state of our city and world. I hope the original Independent Eye would be proud."

A release party for Optic: a Visual Tribute to the Independent Eye will be held 2-5 p.m. Feb. 15 at Downbound Books (4139 Apple St., Northside). Searchable on Facebook. For more on The Independent Eye check out our previous cover story.