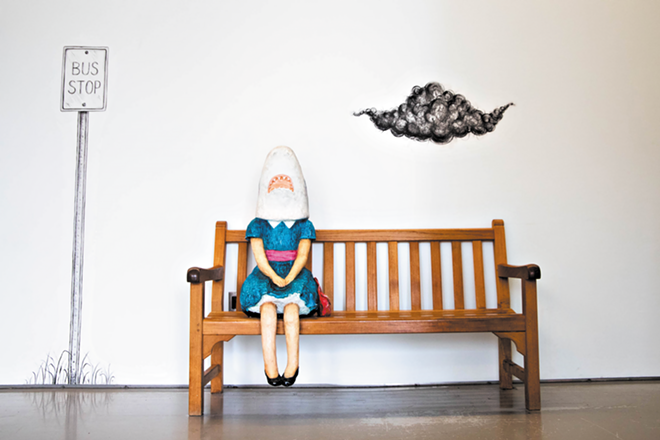 Shark Girl started off as a sketch in 2004 that Millard drew to cope with her anxiety and fears. Now a therapist at the Art Academy of Cincinnati, the character’s origins can be traced back to Millard’s youth: As a child, she began having panic attacks when she imagined that there was a shark in the pool. Shortly after she got married in 2001, a period in which she began reflecting on human mortality, the panic attacks resurfaced. Although her husband was only 30 at the time, Millard was afraid he was going to die. To help ease her anxiety, she started drawing a girl who has a shark’s head — a reflection of her younger self’s fear.

“I started drawing this little girl character who was sort of this powerless person, and she had the head of a shark,” Millard says. “She was this person who has no power who was also frantic and made up of the things she was afraid of.”

Millard landed an art show in Chicago in 2005 and it was while looking through her sketchbooks to find an idea for the exhibition that she returned to the character.

“I had these doodles of this little shark girl throughout the book. I thought, ‘OK, well, maybe I’ll try to make some work about her.’ That’s what I did,” Millard says. “I started making that and then literally, that was it.”

Millard has been making art about Shark Girl ever since.

Flash-forward to 2012 and she was asked to create a show for the UnMuseum — a gallery of interactive art geared toward children at the Contemporary Arts Center. She drew and animated a short film starring Shark Girl to accompany the show. One piece of the installation featured a now-iconic sculpture of Shark Girl sitting on a bench with a storm cloud hovering nearby. The response to this piece was so positive that it remains at the CAC to this day and proves to be a popular photo-op among visitors.

The following year, Millard made a fiberglass Shark Girl piece for Cincinnati that was installed at Sawyer Point Park near the riverbank. The installation was temporary and was only supposed to stay for roughly six months, Millard says.

Millard wanted to keep Shark Girl there, but because the installation kept getting vandalized, the park didn’t want to deal with the finances of keeping it. She had to move her. Around the same time, the curator of public art at the Albright-Knox Art Gallery in Buffalo, New York reached out to Millard and asked if she could make a sculpture similar to the one at the park.

The gallery ended up buying the Sawyer Point sculpture instead and relocated Shark Girl to Buffalo, where she has since become a town mascot. Atlas Obscura has Shark Girl listed as a top destination in Buffalo, noting the sculpture as a “compulsory destination for selfies.”

Millard says there are murals and T-shirts of Shark Girl in the city. Occasionally, Shark Girl will make the local news, end up on the jumbotron at a hockey game or have people propose in front of her.

In 2014, Millard added on to her creation’s mythos by way of the children’s book Shark Girl and Belly Button, which was published by Cincinnati’s Blue Manatee Press. The book follows Shark Girl and her friend Belly Button while they write letters, make paper dolls, appreciate their friendship and more.

Currently, Millard is working with an art representative in Denver to make limited-edition prints of Shark Girl. She has hopes that the character will expand beyond the Eastern U.S.

“I’ve always been like, ‘Buffalo’s not necessarily regional but not too far out of the region.’ I’m hoping she makes it to the West Coast and Miami,” she says.

Although Shark Girl was created by Millard, she now exists on her own.

“The things that happen in her world — because she’s a public sculpture now — happen without me and I have no knowledge of them,” Millard says. “Her life is separate so it’s almost like I draw these illustrations of her life that are also imaginative because I don’t know what’s really happening to her.”

Millard didn’t anticipate an outpouring of positive feedback about Shark Girl when she first created her. In the past, some of Millard’s pieces had darker themes that reflected her mental state at the time. When her work was depressing, Millard says the sales followed suit — people weren’t buying her art.

“It’s such a sweet and sour thing about her (that) I feel like people somehow relate to,” Millard says. “The sweetness left for a while, and then I don’t think as many people could identify.”

In 2012, Millard stopped drinking and went to therapy. After that, her work became happier and sales started picking up. She says she doesn’t think the success had anything to do with Shark Girl, but rather the energy she put into her practice.

Shark Girl was made to reflect Millard’s mental state 16 years ago. Since then, the creation has grown and evolved with the creator. The once timid, anxious character is now mentally healthy, happy and worries less, Millard says.

“It didn’t really matter what it was about because I made these pieces of work that were just really time- and labor-intensive,” she says. “It was really the activity of just keeping my brain busy and off of my own perceived problems.”

Millard says that Shark Girl can be therapeutic for other people because the character allows them to relate to her sadness, while also being visually attractive. She says a large portion of her fanbase is at the “transitional, angsty age,” which is how she describes Shark Girl. Fans have gotten tattoos of the character, bought prints or taken selfies to show their love for the absurd creation.

“I think her public life is so much better than anything I’ve made of her,” Millard says. “I think the fact that the selfies and the tattoos exist is way more powerful than anything I could ever make with her in it. I almost feel like her life has become more of the work.”