From award-winning TV writers to podcasters, magicians and radio personalities, Cincinnati will get a wide range of laughs. 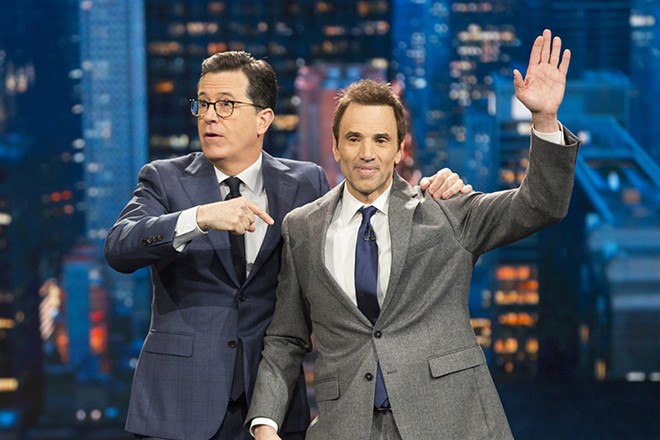 Paul Mecurio at Go Bananas Comedy Club
It’s never been a better time to be Paul Mecurio. The veteran stand-up comic and TV writer is coming off a big Emmy win for his work on The Late Show with Stephen Colbert. “Man, I’ve got so many now I have no idea where to put them,” he jokes. It’s not just the small screen, though, that’s taking up his time these days. He’s slated to be in the new Megan Fox film Johnny & Clyde. “I have these amazing love scenes with her,” he tells CityBeat. “I told them in my contract I didn’t want to sleep with her, but they said I had to because of my handsome demeanor,” he laughs, before adding, “Just let me have my fantasy.”

He is still managing to get out on the road and do stand-up, and he says the slowdown gave him time to reflect. “It was interesting to go back with a fresher perspective. Re-energizing the act to be back out after time off because of COVID was very beneficial," Mercurio says. "There’s a lot of new stuff in my act from dealing with COVID, and a lot of fun new themes that came from just observing. When you’re not going a hundred miles an hour, you have time to observe the world and comment on it."

That means trying to navigate a post-COVID and more socially-aware world. “Can I just be the guy in the middle that agrees with some of what you believe in but not everything? And if I don’t believe in everything you believe in I’m not the bad guy,” he says. 7:30 p.m. and 9:45 p.m. Oct. 7 and 8, Go Bananas Comedy Club, 8410 Market Place Lane, Montgomery, gobananascomedy.com.

Guy Torry at Liberty Funny Bone
Guy Torry went from working behind the scenes in the entertainment business to being a stand-up comic (at the behest of his comedian brother Joe). “I knew about Eddie Murphy and Richard Pryor of course, but I wasn’t inspired until I saw people my own age making a living at it," Torry tells CityBeat. Anxious to make a name for himself, he says he went by the name Guy T., so as not to be connected to his brother. Behind the scenes though, Joe showed him the ropes and introduced Guy to Martin Lawrence, who at the time had a very successful sitcom. “They gave me a gopher job, which to this day is the best job I ever had,” Torry says.

In addition to being Lawrence’s body double, Guy was also popular with the writers who asked him for jokes. Finally he said, in a jovial manner, that he wanted to be paid for writing. One of the writers took him up on it, and he co-wrote a script. He describes his stand-up as a “gumbo” that mixes with politics, relationships and social observation.7:30 p.m. and 10 p.m. Oct. 7; 7 p.m. and 9:30 p.m. Oct. 8. Liberty Funny Bone, 7518 Bales St., Liberty Township, liberty.funnybone.com.

Mike Birbiglia at Taft Theatre
Mike Birbiglia’s long-form storytelling style has made him a hit with comedy fans as well as with listeners of radio programs like This American Life, to which he sometimes contributes. Birbiglia wrote, directed and starred in the critically acclaimed film Sleepwalk with Me, which came together with the help of This American Life host Ira Glass. Birbiglia has also produced two comedy albums as well as four Comedy Central specials. His likable everyman demeanor makes him one of the most popular touring comics in the country. 7 p.m. Oct. 13. Doors open at 6 p.m. Taft Theatre, 317 E. 5th St., Downtown, tafttheatre.org.

Jimmy Pardo at Go Bananas Comedy Club
Jimmy Pardo is probably best known as the host of the very popular podcast Never Not Funny, a program that helped define the genre. He has also done extensive television work, including on Conan. Pardo started off as a traditional joke teller but switched his focus to telling funny stories about his life after fellow comics noted he was even funnier off stage just talking with his peers. That catapulted him to top headliner status. He only plays a few dates a year, but Cincinnati – where he has a sizable and loyal fan base – is always a stop. 7:30 p.m. and 9:45 p.m. Oct. 14 and Oct. 15. Go Bananas Comedy Club, 8410 Market Place Lane, Montgomery, gobananascomedy.com.

Dave Landau at Liberty Funny Bone
Like many comedians, Dave Landau made a conscious decision not to be based in New York or Los Angeles, opting instead for his hometown, Detroit. “I plan on staying there forever,” he tells CityBeat. “I’d move if I had to, but honestly I like where I’m at. I like raising my son there, so I’m in no hurry to move back to either coast.” Indeed, he has a handshake deal with a friend who functions as a booker but no agent. “I don’t see the need for one anymore,” he says. “It’s like I run my own business and do my own thing.” On stage he’s gotten more personal, opening up about being a recovering addict. His Midwestern upbringing also informs his set. “People crap on the whole rust belt,” he says, “but I think that’s where you’ll find some of the most real people in the country. It’s real families from real factory towns. It’s what America once was and still is but only in those places.” 7:30 p.m. and 9:45 p.m. Oct. 14 and 7 p.m. and 9:15 p.m. Oct. 15. Liberty Funny Bone, 7518 Bales St., Liberty Township, liberty.funnybone.com.

Kurt Metzger at Go Bananas Comedy Club
Veteran comic Kurt Metzger is known to audiences for his stand-up, as well as his involvement with hit series like Inside Amy Schumer and the animated Ugly Americans. A former animation student (he dropped out to pursue stand-up), Metzger loved his work on Ugly Americans. “Man, it was so great,” he tells CityBeat.  “Almost no cartoon is funny its first season, but that one was.” His stage comedy ranges from observational to dark, with a little social satire thrown in. Varying times Oct. 20-23. Go Bananas Comedy Club, 8410 Market Place Lane, Montgomery, gobananascomedy.com.

Josh Arnold October at Liberty Funny Bone
Josh Arnold, known to fans of radio’s The Bob & Tom Show, will take the stage at the Liberty Funny Bone. The St. Louis native was named the best male comedian in his hometown in 2011, which led to multiple appearances on the popular Indianapolis-based radio program. Before becoming a comedian, he worked for a sporting goods manufacturer and spent two years in South Korea teaching English. In 2016 he joined TheBob & Tom Show and has been a fan favorite ever since. 8 p.m. Oct. 21, and 7 p.m. and 9:15 p.m. Oct. 22. Liberty Funny Bone, 7518 Bales St., Liberty Township, liberty.funnybone.com.

Tabari McCoy at Go Bananas Comedy Club
Tabari McCoy is a Cincinnati native who often describes himself as the “Black Charlie Brown.” He’s really more successful than he lets on, though, as he will be recording his third comedy album when he headlines Go Bananas in Montgomery. “As a comic, you’re always working on new material to the point that once you know it’s working, you need to give it a send-off,” he explains to CityBeat. “Those send-offs in my case end up as a new album and, now that I feel emotionally and intellectually ready, a streaming special. There’s that and the fact that it’s been an Olympics since the last album, which means that if I don’t have a new one good to go, I don’t have a medal worthy performance in me.” Varying times Oct. 27-30. Go Bananas Comedy Club, 8410 Market Place Lane, Montgomery, gobananascomedy.com.

Piff the Magic Dragon at Taft Theatre
Piff the Magic Dragon first came to the attention of American audiences via the TV show Penn & Teller: Fool Us back in 2011. He didn’t fool the duo, but they were definitely impressed, calling the young Brit’s act their favorite of that season. That helped pave the way for full-time work in Las Vegas, where Fool Us is taped. Currently settled into a regular gig at the Flamingo Hotel and Casino, Piff (real name John van der Put) takes his show on the road a few weeks a year. 8 p.m. Oct. 27. Taft Theatre, 317 E. 5th St., Downtown, tafttheatre.org.

D.L. Hughley at Liberty Funny Bone
"Nobody in my family is funny," says D.L. Hughley. "I'm a kid from Warren, Ohio, and there's nothing funny about that. In fact, my mother still gets angry that I now get paid for doing what I used to get a whuppin' for." Though he was born in Ohio, Hughley actually grew up in Los Angeles – specifically the infamous South Central area. Expelled from high school, he wound up in The Bloods gang. After his cousin was shot to death, D.L. realized it was time to change the direction of his life. He got a job at the Los Angeles Times as a telemarketer and began climbing the corporate ladder. He met his wife at that paper, and it was she who suggested he try stand-up comedy. Drawing on family experiences from both his childhood and adult life, D.L. and his tell-it-like-it-is style were a hit. He was one of the Original Kings of Comedy and has since branched into radio and acting while occasionally serving as a game show host. Varying times Oct. 28-30. Liberty Funny Bone, 7518 Bales St., Liberty Township, liberty.funnybone.com.