Manifest creates a community darkroom for those dissatisfied with digital photography

The community-access darkroom will open this month at the Madisonville location. 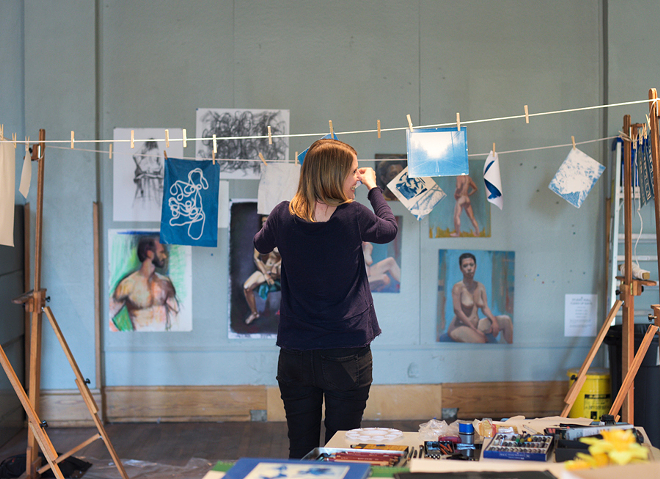 At a time when other institutions had dismantled darkrooms in favor of digital photography and camera shops had closed, Manifest was taking a bold step forward — not back, Franz insisted — for art. It had heard from photographers who wanted to experience hands-on developing for the first time, or return to it for fresh ideas. “We’re putting the artifact back in art,” Franz says.

Manifest is converting the drawing center’s restroom and kitchen so students and community members can develop black-and-white film and practice alternative processes such as cyanotype. There are six enlargers donated by Michael Wilson, the local photographer known for album covers of Lyle Lovett and Over the Rhine. Individuals without a film camera can borrow one from the center. In addition to open hours, Manifest plans introductory classes and workshops with visiting artists.

Housed in a century-old former Masonic hall full of natural light, the drawing center is a space that fosters sharing and awareness.

“People come here and think it feels like the old Art Academy in Eden Park, with that Frank Duveneck spirit,” Franz says. “You walk through a filter.”

Making good art is not just about the materials used, he says, but time and patience. “Learning to draw is learning to see” is Manifest’s mantra. According to Manifest, drawing informs every other visual art.

Photography is another way of looking at the world, Franz says. Adding the darkroom aligns with his mission to develop not only better art, but better people. His nonprofit had produced photography books and exhibitions, but the medium wasn’t part of its educational experience.

The idea for a community-access darkroom started with a conversation about four years ago between Franz and Wilson. Wilson had led workshops at Baker Hunt Art & Cultural Center in Covington and wistfully remembered the meditative feeling in its now-idle darkroom. It was a place to slow down and develop organic conversations as well as photos.

“Bigger issues of the day would get discussed, or questions of why we care about pictures,” the soft-spoken Wilson says. “That’s what I hope for in a darkroom open to the community.”

Wilson, 57, says there’s a curiosity among younger photography students who never worked in a darkroom, and a continuing appreciation among those who have a background in film.  His darkroom is in his home’s laundry area.

“I value the processes that allow me to have a part in making the photo. They’re a perpetual reminder of how magical this stuff can feel,” Wilson says. “To engage the hands and the will, I think that’s when change happens in us.”

His wife’s positive experience while taking figure drawing classes at Manifest convinced Wilson it was the right place to perpetuate his darkroom memories. The open drawing sessions are moderated, but there aren’t instructors. Learning happens as participants talk.  “There’s something special going on here,” Wilson says.

Franz says he got chills in his first conversation with Wilson. But Franz wanted to take time to explore demand for a community darkroom and its cost. At the time, he also needed to find a separate coordinator for the drawing center. Franz hired Kate Cunningham for that position in 2014, but was also thrilled to learn she’s a photographer. With Cunningham able to lead the darkroom programming, Franz approached the Manifest board and benefactors.

Cunningham has a foot in both the analog and digital worlds. “You really learn the camera when you shoot film,” she says.

She saw universities switch from darkrooms to print labs in the years between earning her bachelor’s from Washington University in St. Louis in 2004 and her master’s from Notre Dame in 2008.

Film is what drew her to photography. “I went to it for its handmade quality,” she says. “That ‘making’ aspect of photography has been lost, and I look forward to that (again).” She has carted around boxes of her undeveloped film for years.

Like Wilson, Cunningham used the word “meditative” to describe the university darkroom. She remembers informal critiques students would offer while waiting for their prints. Digital photography is more of a solitary pursuit, she says.

PhotoCorps, a project to encourage knowledgeable photography, is the brainchild of Chris Glass, a Haile Fellow at People’s Liberty. He’s been leading neighborhood PhotoWalks and created a PhotoScouting guide to encourage picture-taking with intent, no matter the camera. “Folks are eager to exercise their photographic eye and want to understand techniques, subject matter and composition,” Glass says.

As followers complete challenges, they earn badges. In spring, photos will be collected into a book, for “a satisfying, tangible and lasting result.”

Those projects are good news for people like Wilson, who is concerned that in simply pushing a button, the digital society has become numb to valuing the effort that should go into making a picture. “The (slower) process allows us as practitioners to be changed by the process,” he says.

Franz has called Manifest a preservation agent for approaches that hold relevance today. “We refer to cave painting in our drawing classes,” he says. “Going into the darkroom is like going into the cave. You make a choice to go in there. It’s deliberate.”