Is 'Airborne' the greatest movie filmed in Cincinnati? 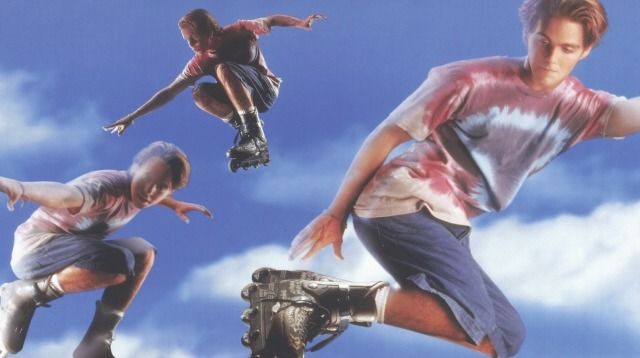 Does the name Mitchell Goosen mean anything to you? If not, adjust your priorities.

Airborne is a Cincinnati-filmed, 1993 Rollerblading-focused teen drama that follows California surfer Mitchell as he relocates to Cincinnati to live with his aunt and uncle while his parents are on assignment in the Australian Outback. Mitchell trades in riding waves for blading down Cincy’s sweet hills and joining the high school ice hockey team (the movie weirdly and incorrectly thinks Cincinnatians are obsessed ice hockey).

For the film's 20th anniversary in 2013, locals Joe Besl and Michael Sweeny hosted a special screening of the film at OTR's Japp's and for the 25th anniversary, they're at it again, hosting a screening and '90s dance party at Northside's Northside Yacht Club on Friday here.

And read our interview with Airborne star Shane McDermott below, originally published in a 2013 issue of CityBeat:

Cincinnatians love seeing this city on-screen and there’s no greater film that encapsulates the spirit of the Queen City (plus the awesomeness of early ’90s Rollerblading and turtlenecks) more than the seminal sporty romantic comedy Airborne.

Yes, Airborne: The local cult classic about a California surfer dude who begrudgingly moves in with his aunt and uncle in snowy Cincinnati only to find love, friendship and some sweet ass hills to Rollerblade down (Devil’s Backbone, anyone?).

This year, the film turns 20, and two local Airborne aficionados — Joe Besl and Michael Sweeny — have set up a screening and ‘90s-inspired party to celebrate its platinum anniversary and elevate its place in Cincinnati’s pop culture legacy.

“My love affair with Airborne started when I was 8 years old and my sister gave me a VHS copy of the movie,” Sweeny says. “I owned a pair of Rollerblades, so the whole extreme sports theme was appealing, but then I watched the movie and discovered it was set in Cincinnati and that just totally blew my gourd. Seeing it was one holy shit moment after another.”

“People think I’m being ironic when I admit my obsession,” he continues, “but the more times I watch the movie, the more sincerely I appreciate it.”

And Sweeny and Besl want to share their cinematic appreciation with others through their public film screening.

In another “holy shit” moment, CityBeat recently tracked down Airborne star Shane McDermott aka Mitchell Goosen to talk to him (via email) about his time in Cincinnati, how sweet Mitchell Goosen actually was at Rollerblading and the lasting legacy of Airborne.

CityBeat: Tell me a little bit about your sports history. It’s obvious you actually Rollerblade. Were all of the Mitchell Goosen Rollerblading shots you? Or did you have a double do some of the tricks? What about the “Devil’s Backbone” race?

Shane McDermott: As a young kid, I would travel to auditions by Rollerblade, at times holding on to the New York City taxis for extra speed. Skating the streets of NYC taught me just enough to make Mitchell Goosen look authentic. We had an amazing team of professional skaters, led by Pat Parnell, who executed most of the stunts. I would like to mention that at the film’s completion, I received the coveted award of “most carnage” — most of the damage was done on Devil’s Backbone.

CB: Obviously, I have to ask about Seth Green and Jack Black. What was it like working with them? Was there any inkling they would go on to have the careers they have?

SM: Working with Seth Green and Jack Black was an amazing experience. To this day, I think Seth is the funniest person on earth — talented, professional and a great guy all around. Due to the production schedule, I spent less time working with Jack Black, but his creativity and talent were apparent from the first day.

CB: Had you ever been to Cincinnati before you started filming Airborne? What was your first impression of the city?

SM: No, Airborne was my first visit. The day I arrived, I met a small production team at the airport to shoot the scene where Mitchell’s surfboard is taken off the plane. It was snowing and I was dressed in jeans, a light jacket and Vans standing on the airport runway next to a parked 737. My thoughts at the time: “This is so cool.”

CB: How well did you get to know the city while you were here? Do you remember a specific part of town or location that you really loved?

SM: My experience of Cincinnati was unique because a film crew was always present due to the heavy shooting schedule. But, I would have to say Pompilios restaurant, the city skyline and the botanical gardens (Krohn Conservatory) stand out as favorites.

CB: Can you describe one of your favorite memories of shooting and being in Cincinnati?

SM: For the date night scene, the city organized to turn on all the lights of the downtown skyline. I remember being impressed the city of Cincinnati would do that for our film. Cincinnati is the best.

CB: It’s been 20 years since the film came out. I read that you have no urge to get into acting again, but can you reflect on the film, its sort of status as a cult classic and your relationship to it now, two decades later?

SM: Don’t believe everything you read. I love acting and look back positively on a successful career as a young actor. Of all the work that I’ve done, I am the most proud of Airborne. Its status is a testament to its quality. A great cast, an amazing production team and a little magic. It was an honor to participate, and if I ever had the opportunity to do it again, I would not think twice.

CB: Do you ever watch it?

SM: I watch Airborne with my nieces and nephew all the time.

CB: What do you think about the fact that there’s a screening and party locally to celebrate the film?

SM: I think it is great and would like to commend Cincinnati on its good taste.