If it’s musicals that get you to the theater, you have lots of choices this weekend. Here are three to consider. 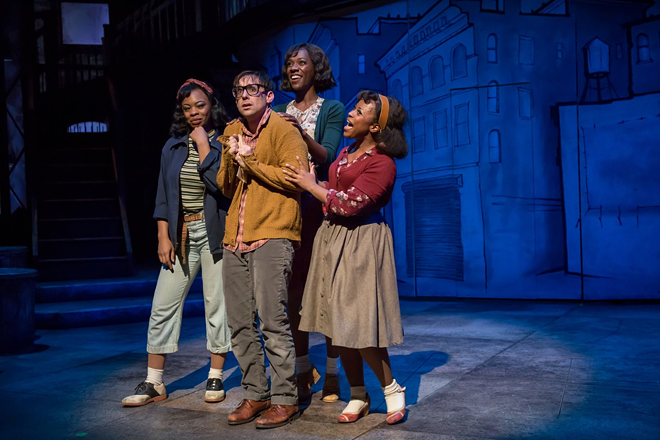 Photo: Mikki Schaffner Photography
Seymour (Nick Cearley) with Ronnette (Ebony Blake), Chiffon (Johan Nandi) and Crystal (Alexis Tidwell) in "Little Shop of Horrors"
Little Shop of Horrors, which opened Thursday evening in a sparkling production at the Playhouse (it continues through Feb. 19), is a modern musical with its tongue firmly planted in its cheek. Based on Roger Corman’s 1960s cult fav movie, it’s the story of a carnivorous plant bent on world domination. Broadway director Bill Fennelly staged this co-production (it’s already had a run at Portland Center Stage in Oregon), so it’s polished, confident and highly entertaining. Nick Cearley (seen last season in Ensemble Theatre’s one-man show, Buyer and Cellar) plays the nerdy Seymour, stuck as a klutzy flower shop assistant. He pines for Audrey, the beautiful but insecure salesgirl (Gina Milo). He makes a Faustian bargain for fame when he cultivates an exotic plant from outer space with a serious yen for human blood. Jamison Stern is fun to watch in a dizzying array of roles, especially a sadistic dentist. The show’s tuneful score draws on Motown; its especially infectious numbers are delivered by three street girls, Ronnette (Ebony Blake), Chiffon (Johari Nandi) and Crystal (Alexis Tidwell), who are the Greek chorus in this campy, morality tale. It’s a blast. Tickets: 513-421-3888.

Meredith Willson’s The Music Man is at the Carnegie in Covington through Sunday. This is a fine production of a classic all-American show, the story of the flimflam musical instrument salesman Harold Hill and “Marian the Librarian,” who doubts him and then gets charmed. Dave Wilson and Sarah Viola fill those iconic roles with vocal skill and some serious panache, but the supporting cast is fun to watch from top to bottom. Sean Mette is a spunky Marcellus, and Jim Stump plays River City’s overwrought mayor. The school board gets turned into a barbershop quartet, and they steal the scene every time they start harmonizing. The entire ensemble, with lots of kids and townspeople, are well rehearsed and having a ball, under Greg Procaccino's direction. You’ll leave the theater humming one of the stick-in-your-brain tunes. Tickets: 859-957-1940.

First Date at Ensemble Theatre (through Feb. 5) offers a simple story: A blind date that seems like it might be over before it even starts. Schlubby Aaron (Michael Gerard Carr) sweats out a blind date with sophisticated Casey, who’s convinced this can’t work. Five more actors play pushy waiters, grandmas, exes, BFFs and figments of Aaron and Casey’s imaginations. We follow the evening from “First Impressions” to “The Check!” with stops along the way for honest, hilarious moments that occasionally thwart expectations, keeping it fun. Read more about the show — which I've given a Critic's Pick — here. It’s a great show for a date — but perhaps not a first date… Through Feb. 5. Tickets: 513-421-3555.

Two show that opened a week ago: Cincinnati Shakespeare’s staging of the second installment of its adaptation of Henry VI. It’s the preface for the upcoming Richard III, one of Shakespeare’s best villains. Read more here. Through Feb. 11. Tickets: 513-381-2273.

The Covedale Center has a well-acted production of John Patrick Shanley’s Doubt, A Parable, the story of a battle of wills between a stern nun and an open-minded priest whose actions with a schoolboy are cause for suspicion. No simply answers, but some very thought-provoking confrontations. Through Feb. 12. Tickets: 513-421-6550.

One last tip: A documentary for musical theater fans gets a screening at the Esquire on Sunday afternoon at 1 p.m. The Best Worst Thing That Ever Could Have Happened chronicles the original production of Stephen Sondheim’s Merrily We Roll Along, his one flop. The musical about show business closed after just 16 performances in 1981. But there’s so much more to what it meant to the young cast, who the documentary traces through the following 30 years. I’ll be at the Esquire to introduce the film and handle a Q&A afterwards. Read more about the screening here.