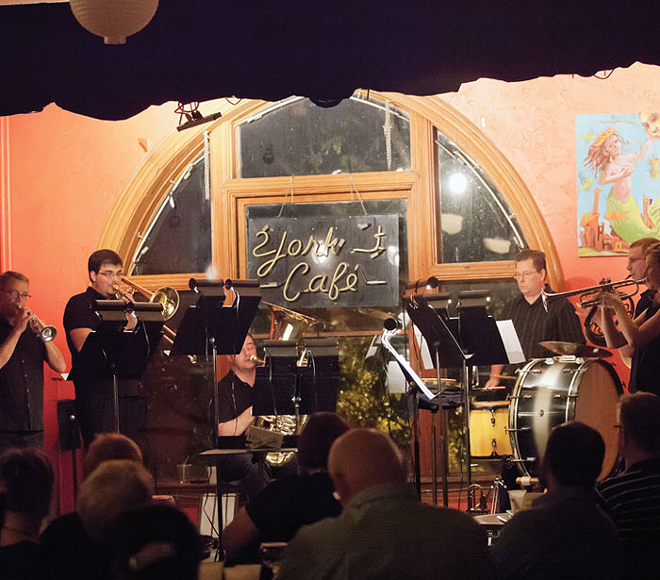 Photo: Courtesy of Cincinnati Chamber Orchestra
The MicroBrass concert at York St. Café was a highlight of the first Summermusik festival.

Designed to fill a gap between the end of the Cincinnati Opera season and the start of Cincinnati Symphony Orchestra’s, it offered traditional concerts, featuring the full chamber orchestra, at Corbett Theater in the School for Creative & Performing Arts. But it also offered casual variations — “chamber crawls” with small ensembles in area bars and afternoon performances in more intimate venues. They were all well attended, and there was buzz that the orchestra might be turning a corner in its four-decade history.

“We had tremendous growth in new attendees,” says Cincinnati Chamber Orchestra general manager LeAnne Anklan. “And even better was that many former subscribers returned. It was a lot of events in a compressed time, but we had people who came to every performance.”

Now the orchestra hopes to continue that momentum with its second Summermusik festival, which begins Saturday and continues through Sept. 1. There are a lot of events — 14 in all — and several are already sold out. The lineup includes Classical music, Jazz and Rock and features outstanding soloists and trendy locales. It also offers opportunities to sample beer, wine, coffee and pastries along with the listening experience.

“This year, the number of subscribers has already doubled,” Anklan says. “A lot of our subscriptions are from people who got closed out of concerts last year and wanted to make sure they got in.”

You have to admire the inventive high-spiritedness and risk-taking of the programming choices. For instance, the closing-night performance at Corbett Theater opens with Miguel del Águila’s “Conga-Line in Hell,” described as a “catchy piece featuring Cuban rhythms.”

The Aug. 26 Chamber Crawl at Mount Lookout’s Redmoor club mixes Rock with Classical music and was co-curated by acting concertmaster Amy Kiradjieff and Rock guitarist Roger Klug. The Fab Five — a string quartet augmented by Klug plus a few others — will play music by Brian Wilson, David Bowie, Smokey Robinson, Yes, The Left Banke and The Divine Comedy.

In another Chamber Crawl on Aug. 19, MicroBrass — a small ensemble of brass musicians that played a sold-out concert last year at Newport’s York St. Café — will perform at Over-the-Rhine’s Below Zero Lounge. The event also features Kenny McNutt, a co-founder of Cincinnati’s MadTree Brewing, leading a beer-tasting session to accompany MicroBrass’ fanfares, marches and dances.

Amping up the overall excitement level will be the fact that the more traditional concerts with the full chamber orchestra will feature guest conductors who — along with Kelly Kuo, last year’s interim music director — are candidates for the still-open position of music director. Their full-orchestra programs, most of which occur on Saturday nights, feature highly regarded soloists and collaborations with local artists.

The candidates have also curated second smaller concerts, most of which take place on Sundays and are part of a series called A Little Afternoon Musik.

This Saturday’s opening program at Corbett Theater is “Paris, Piano & Pirouettes,” led by music director candidate Daniel Meyer, a graduate of the University of Cincinnati College-Conservatory of Music. It includes French-inspired music as well as American composer Aaron Copland’s Music for Movies, a chamber orchestra premiere that will feature dancers from CCM’s Modern Dance department.

Here are the other concerts by the music director candidates:

• Christopher Zimmerman leads the orchestra on Aug. 20 in a program that brings dance to the stage, with violinist Chee-Yun performing an arrangement of the late Argentine Tango composer Astor Piazzolla’s The Four Seasons of Buenos Aires. The program also features Edward Elgar’s “Introduction and Allegro for String Orchestra and Quartet” and Beethoven’s Symphony No. 7. For the Aug. 21 Afternoon Musik concert at Indian Hill’s Greenacres Arts Center, Chee-Yun teams up with orchestra members for an afternoon of duets curated by Zimmerman.

• On Aug. 27, Sarah Ioannides, a former assistant conductor with the CSO, will conduct “Caribbean Rhapsody,” written by Grammy-winning composer Roberto Sierra in a world-premiere arrangement for chamber orchestra and saxophone. James Carter, a major figure in Jazz, will play soprano, alto and tenor sax. The Aug. 28 Afternoon Musik program that Ioannides has curated at the Cincinnati Art Museum features the orchestra’s woodwinds with Carter on soprano and tenor sax and a Jazz trio from Cincinnati Contemporary Jazz Orchestra.

•  Eckart Preu leads the final two Summermusik performances, starting on August 30 with his curated Chamber Crawl program of Viennese-inspired music at Newport’s The Sanctuary. It will have cellist Joshua Roman team up with Hip Hop dancers from Elementz on a Beethoven remix created by Scot Woolley. Preu also will play piano on two selections.

On Sept. 1, Preu conducts the festival-closing Sonic Odyssey program that features, in addition to “Conga-Line in Hell,” Roman performing Camille Saint-Saëns “Cello Concerto No. 1 in A Minor, Op.33” and — on electric cello — Icelandic composer Daníel Bjarnason’s “From Bow to String.” Mozart’s “Paris” Symphony and Copland’s Appalachian Spring Suite will also be heard.

As for next year’s Summermusik? “What we do in 2017 will be interesting, because we’ll have somebody new in the music director position then,” says Ann Stewart, the orchestra’s communications manager.