The Delta Queen Will Set Sail Once Again in 2020 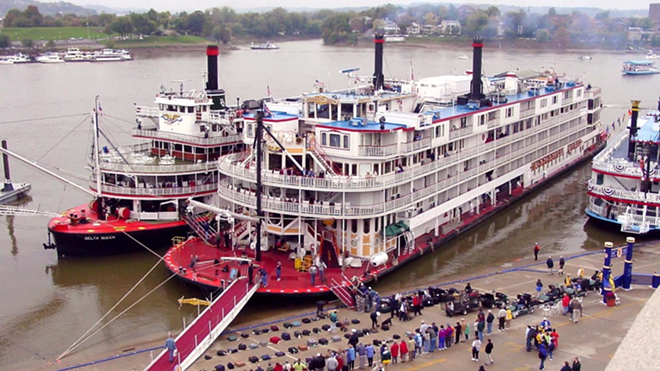 Creative Commons
The Delta and Mississippi Queen in Cincinnati's port.

The Queen is in the process of being restored. Her needs include over $10 million in repairs, spanning fire safety, generator, sewage and mechanical upgrades.

“What the passengers will hear and see is what the Delta Queen is largely known for,” says Phillip Johnson, part of the Delta Queen's current owners, DQSC, LLC, of the restoration process in a press release.

Restoration is expected to wrap up next year.

Constructed in 1926, along with the Delta King, the boat cost over $1 million to build. (At the time, similar boats were constructed for $80,000-$100,000, according to the National Trust for Historic Preservation.)

Made with luxury in mind, the Delta Queen boasted Tiffany-stye stained glass windows, a grand staircase and crystal chandeliers. In 1940, the Queen and King both were used by the Navy during World War II to transport soldiers from the bay of San Fransisco to boats farther out to sea. Post-war, she called Cincinnati's port home, serving as a tourist vessel that traveled to ports throughout the Midwestern and Southern United States.

Things got shaky in 1966 when, in response to a cruise ship that caught fire on the Florida Coast, Congress passed the "Safety at Sea" Act, which requires ships that carry over 50 overnight passengers to be made out of fire-retardant materials. The Delta Queen didn't fit that bill. But, in 1968, she was made exempt from the law. Things sailed smoothly until 2008, when the Delta Queen's owners opted not to renew the exemption. Some senators and representatives also opposed her exemption, citing safety concerns, and Senator Daniel Inouye of Hawaii wanted the Queen's crew to be unionized before supporting the exemption.

Set up in Chattanooga, Tennessee, the Delta Queen operated as a floating hotel until 2015 when she was bought by Phillip Johnson, Cornel Martin and Leah Ann Ingram under the company DQSC, LLC, still operating sans the Safety at Sea Act exemption. Since then, she has been stored in Houma, Louisiana. There, her owners have been working to have her sail once again.

Designated a National Treasure by the National Trust for Historic Preservation and included in their 2016 list of "America's 11 Most Endangered Historic Places," Johnson says in a press release that word was able to get out to save the boat.

Cut to 2018 — the Coast Guard Authorization was signed into law, which will allow the Delta Queen to legally sail once more as an overnight passenger steamboat.