The O.F.F. Market Returns with a New Location at Summit Park

After having to cancel 2020’s annual market, the O.F.F. Market Is back on with a new location and more vendors than ever before. 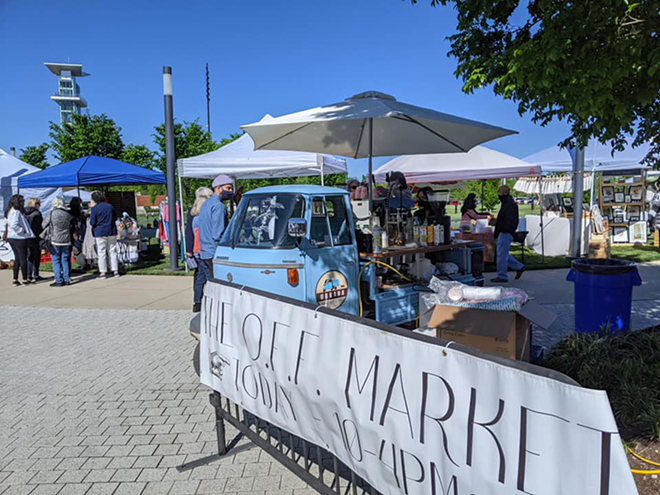 The O.F.F Market (aka the Oakley Fancy Flea Market) has been a staple in Cincinnati since its premiere in 2013. After six years of summer and winter markets at both Oakley Square and MadTree Brewing Company, the O.F.F. Market was canceled in 2020 due to COVID — a decision that directors and husband-and-wife duo Leah Durig and Mikey Griffen did not enjoy making.

“We had to do it,” Durig says. “We worked with MadTree and unilaterally decided that for the safety of everyone, we weren’t going to do it. It was better to not put everyone at risk.”

The pop-up maker fair, which originated in Oakley Square (hence the name) hosts markets the second Saturday of the month between May and September during a normal year. In the past, markets at MadTree showcased about 80 vendors. 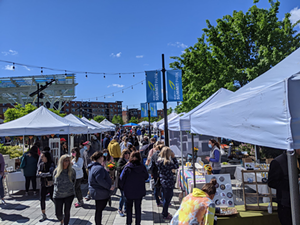 Photo: facebook.com/theoffmarket
The first O.F.F. Market at Summit Park in May

But this year, they market is making a move to the outer suburbs with a new location at Summit Park in Blue Ash. The 130-acre park is built on the site of the former Blue Ash Airport and features everything from a dog park and catch-and-release fishing pond to an elaborate playground and 153-foot observation tower. There are also restaurants, including an outpost of Over-the-Rhine favorite Senate.

“(Summit Park) is a place where you can make day of it with the whole family,” Durig says. "There’s so much offered, and it’s only increasing.”

O.F.F. Market will be popping up across the expanse, featuring up to 120 vendors per event — with COVID spacing taken into consideration. Booth offerings run the gamut from artisan eats and apothecary items to vintage shops, flower stalls and T-shirt companies. This year, they also partnered with Fifty West Brewing Co. to serve brews on tap.

Applications for the summer O.F.F. Markets closed on March 31, and Durig says they were worried that there wouldn't be enough small businesses willing to apply.

“There were a lot of small businesses that called it quits after last year (because of the pandemic) and are going about different businesses and employment,” Durig says. “After putting applications out, it was kind of a toss up for us... (But) you could also say that people had a lot of extra time on their hands last year, so there’s probably going to be a lot of people that started small businesses.”

Durig, a jewelry designer, and Griffen, an interior designer, have two kids and a menagerie of pets. They are high school sweethearts, and their passion for the market rubs off on their vendors.

“What’s so special about the O.F.F. Market is the community that has been formed within the vendors and also the customers,” says Hannah Thees, a jewelry designer and frequent O.F.F. Market vendor. “Mikey and Leah go above and beyond to meet every artist and get to know them, which causes vendors who are beside each other to form connections. There’s no competition between us.”

Thees is the owner of Spoons & Such, an Etsy page where she sells her handmade flatware and gemstone jewelry. She has participated in at least one O.F.F. Market a year since the first in 2013.

And the vibe that Thees describes is exactly what Durig and Griffen are going for. The O.F.F. Market originated with the concept of removing the pretentiousness from art and gallery openings, Durig says.

“The market is all about promoting not just small businesses, but people of all kinds with ideas that maybe don’t know how to make a buck on what they do yet,” Durig says.

The first O.F.F. Market at Summit Park was held May 8 and was a rousing success. The duo says in a Facebook post they plan to make the June market even "bigger and better."


Upcoming markets will be held June 12, July 10, Aug. 14 and Sept. 11. And if you go, you'll probably see Durig or Griffen talking to as many of their vendors and visitors as possible.

“People that do these kinds of markets are some of the most awesome, kind, hard-working people you will ever meet,” Durig says. “They’re creative, amazing people. It’s really fun to be there.”

For updates and information, visit theoffmarket.org.