Film critic TT stern-enzi rounds up the top ten films, in his opinion, of 2019

Every year-end review is another mixtape of scenes, themes and performances. The films that endure become moving snapshot memories of the year, an age already old and begging to not be forgotten. Right now, I say (and mean), not a chance.

With the twitchy shocks of The Babadook in mind, audiences were not ready for the latest release from Australian writer/director Jennifer Kent. Not exactly leaving behind the horror genre, The Nightingale sharpens the focus by thrilling us with a tale about an Irish convict (Aisling Franciosi) seeking revenge on the British officer (Sam Claflin) and his underlings who took all that was precious from her. The proceedings are what happen to a restless and vengeful spirit in the toll of such dogged pursuit. 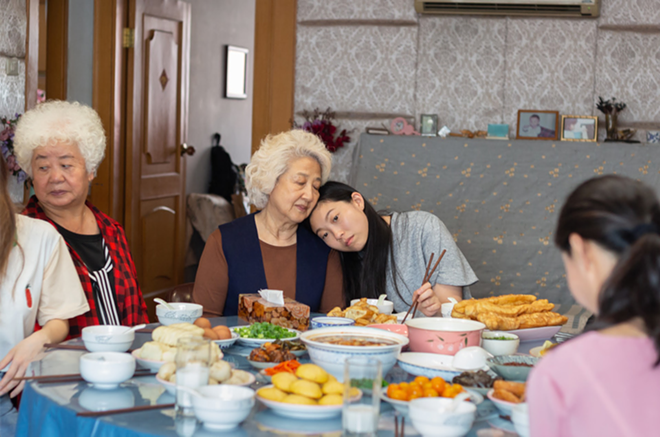 Courtesy of A24
"The Farewell"

Who’s deceiving whom is the question at the heart of writer/director Lulu Wang’s marvelously intimate family drama about a Chinese-American woman (Awkwafina) who must return to China under the pretext of a faked wedding. She’s returning to say goodbye to her grandmother (Shuzhen Zhao), who has been diagnosed with only a short time left — a fact kept from her by her family. The specificity of the love shared between granddaughter and grandmother settles in the heart’s raw pocket.

Much will be made about how director Greta Gerwig might have just made this generation’s adaptation of this classic story, but I’m hyperbolically going a giant leap ahead of that claim. I believe this version of Little Women is the definitive take. Honestly, I can’t imagine anyone capturing the spirit of Jo March better than Saoirse Ronan and Gerwig’s crafty parallel storyline approach deftly moves us through the present and past like a writer telling their own story.

Set in the impoverished suburb of Montfermeil — where Victor Hugo wrote the novel that gives this film its name — writer-director Ladj Ly teasingly blends the tensions of that narrative with decidedly contemporary concerns of police/community relations as a trio of officers face off against competing neighborhood factions while attempting to apprehend a young boy (Issa Perica). Civil unrest will leap from the pages of Hugo and the screen into the consciousness of audiences everywhere.

6. Once Upon A Time… In Hollywood (Quentin Tarantino)

From the moment the lights came up after my screening of Quentin Tarantino’s latest film, I felt a curious ownership and connection with his alternative history; it was less of a lesson and more of a sad dream that should have been real. As much as I enjoyed the stories of fading actor Rick Dalton (Leonardo DiCaprio) and his stunt-buddy sidekick Cliff Booth (Brad Pitt), I wanted to live in the aftermath of the failed Manson Family killings, where maybe Roman Polanski (and Bill Cosby and a host of other unsettling figures) might not have turned into the men we need to hate. While breaking up is certainly hard to do, it is just as complicated attempting to relive a split that goes from amicable to acrimonious in the blink of an eye. Noah Baumbach presents Charlie (Adam Driver) and Nicole (Scarlett Johansson) as good people, achingly human, seeking to move past their loving marriage to a new state.

4. Portrait of a Lady on Fire (Céline Sciamma)

The look of love is on full display throughout writer/director Céline Sciamma’s feature. Operating like a painter using the subtlest of emotional palates, she employs her leads — Noémie Merlant as the young portrait painter Marianne and Adèle Haenel as the bride-to-be Héloïse — as impressionistic tools. Rarely does desire come to life as stirringly as it does here. Class warfare has never been distilled to its core quite so deliciously as it is here. We can damn near smell the desperation and hunger of the Kim family as they huddle together in their ground-level alley hovel, while the decadence of the Parks is as casually rendered as privilege has ever been in a film. Of course, we would all want to experience it and would go to great lengths, right?

Onscreen, suburban striving has never achieved the level of urgency Trey Edward Shults captures here, which makes the fight to hold on, the burn as it slips through the family’s fingers and its haunted (and haunting) aftermath just that much more powerful. But families find ways to escape the undertow. Terrence Malick, much like Martin Scorsese, is one of the most spiritual filmmakers working today. A Hidden Life follows Franz Jägerstätter (August Diehl), a man who lived and died based on a principle from on high (refusing to fight for the Nazis in World War II), but this film celebrates how much each moment of that life truly mattered to him and his family. It is a glorious return to form for Malick, absolving everything he has done since Days of Heaven.

The new horizon offers Bad Boys for Life, a reboot of The Invisible Man, a scary Fantasy Island and a host of comic book adaptations. But the real intriguing question is: What might claim a spot on Top 10 lists for 2020?

Josephine Decker heads off into Who’s Afraid of Virginia Woolf territory with this story about a young couple (Logan Lerman and Odessa Young) that moves in with horror/mystery author Shirley Jackson (Elizabeth Moss) and her husband (Michael Stuhlbarg) only to find themselves in what could be the dramatic makings of Shirley’s next novel.

Inspired by a series of tweets, Janicza Bravo’s feature hits the road with a stripper (Taylour Paige) who goes on a wild trip from Detroit to Florida. Now that’s a logline just waiting to be read and repeated during awards season next year, right?

Biographical documentaries reflect the value of certain lives in our cultural consciousness; in Be Water, I’m hoping we gain perspective on Bruce Lee as Bao Nguyen traces his path in 1971, from Hollywood rejection to his return to Hong Kong for a series of new film projects. We’ve never fully understood his epic struggle bridging these two worlds, only marveled at the furious fights presented to us onscreen.

Woodstock presented a celebrated cultural moment with a rocking soundtrack, but at that time in the same community a summer camp for disabled teens was setting the stage for a movement with lasting impact that continues to be overlooked in today’s discussions of diversity and inclusion.

Noémie Merlant from Portrait of a Lady on Fire slips into the unassuming world of an amusement park worker who lives with her mother, until she meets the park’s new attraction (a carousel named Jumbo) and has her life turned upside down.