Aquino has 10 assists for the season and is part of a three-way tie for leading the National League. 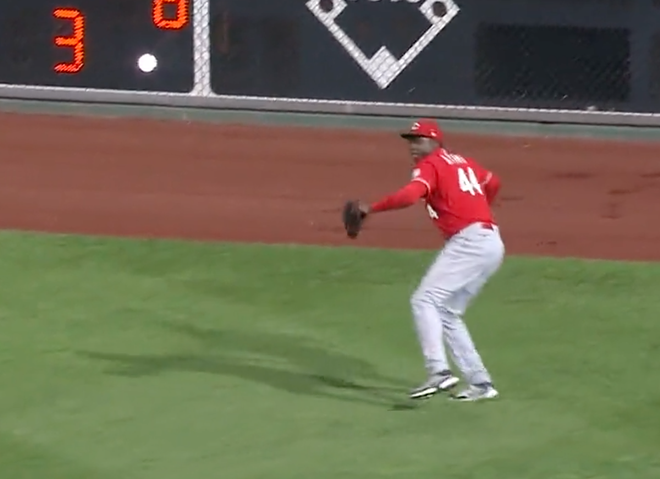 That happened during the Cincinnati Reds' 5-7 loss to the Philadelphia Phillies Aug. 24, when outfielder Aristides Aquino fired an incredible shot to home plate that a starting pitcher would envy.

Aquino robbed Phillies catcher J.T. Realmuto of an RBI double in the bottom of the seventh inning thanks to his impressive arm. Realmuto came to the plate at Citizens Bank Park with Phillies first baseman Rhys Hoskins already on the bag. Reds reliever Reiver Sanmartin threw a 1-1 pitch that Realmuto nailed to right field, where Aquino leaped for the ball. It bounced off the top of the wall, and Aquino scooped it up and gunned it to home, where it bounced once before landing in catcher Austin Romine's glove on the left side of the plate as Hoskins ran toward him from third. Hoskins weaved slightly out of the base path as he slid for home, but Romine – who Cincinnati just acquired at the trade deadline from the St. Louis Cardinals for cash – whirled around to make the out.

A solid throw from the outfield to home already is impressive. So is making that tag.

But the real marvel? Aquino's throw home hit 99 MPH – right around where Reds fastball phenom Hunter Greene typically ends up. MLB's Sarah Langs says that it was the fourth-fastest throw home from an outfielder since 2015, with Aquino also responsible for the top three.

Cincinnati Reds to Battle Every MLB Team for First Time Ever in 2023: The Reds' home opener is March 30, but will Joey Votto and his scarred shoulder be there?


The right fielder racked up an assist for the effort, giving him 10 for the season and making him part of a three-way tie for leading the National League.

As of Aug. 25, the Reds are 48-74 on the 2022 season, are 22 games behind the NL Central-leading St. Louis Cardinals and are not expected to see playoff action in October.

Run on Aquino and you will get punished. 💀 pic.twitter.com/9eQLZn9bG8