...It’s shocking, to no one more so than myself, that 'White Christmas' — which is basically two hours of campy caroling — is one of my favorite films of all time.

To say I dislike musicals is an understatement. I hate them; I don’t understand why anyone needs to break into a song-and-dance routine to describe where they’re going or what they’re doing. So it’s shocking, to no one more so than myself, that White Christmas — which is basically two hours of campy caroling — is one of my favorite films of all time.

The 1954 holiday classic stars Bing Crosby and Danny Kaye as two musical World War II veterans who attempt to save their former commanding general’s Vermont inn from financial ruin and pay tribute to the “Old Man” with a stage show featuring spirited singing sister duo Rosemary Clooney and Vera-Ellen. There’s wintertime romance, physical comedy and pithy dialogue set against a quaint backdrop with stunning costuming, elaborate choreography and lots (and lots) of singing, all complemented by an Irving Berlin soundtrack and liverwurst sandwiches.

In short, it’s a big Old Hollywood vehicle that taps into a romanticized nostalgia for bygone times — albeit through a very white, cisgender lens — and encapsulates the Platonic ideal of the “Christmas spirit.”

And all of it is on display in Irving Berlin’s White Christmas: The Exhibit, a collection at Covington’s Behringer-Crawford Museum of movie memorabilia and costumes on loan from the Rosemary Clooney House museum in Augusta, Kentucky.

“The White Christmas exhibit has a tradition of traveling over the last several years. It’s booked for, I think, the next 10 years,” says Jason French, curator of collections at the BCM. “And it just so happened that this year where it was planned to go wasn’t going to be able to work out and [the Rosemary Clooney House] wanted to do something close.”

As much as White Christmas is a beloved holiday tale, it’s also a local one. Not only was Clooney from the area — she was born in Maysville, Kentucky and went to high school in Cincinnati — but so were co-stars Vera-Ellen and dancer George Chakiris, who later went on to win an Oscar for his role in West Side Story.

The Rosemary Clooney House – which is located in Clooney’s former historic riverside residence in Augusta, where she lived from 1980 until her death in 2002 – was turned into a museum in 2005 by new owners Dr. Steve Henry, a former lieutenant governor of Kentucky, and his wife, Heather French Henry, a former Miss America. French Henry (no relation to the BCM’s French) was born in Augusta and studied fashion and design at the University of Cincinnati’s College of Design, Architecture, Art and Planning, which spurred her interest in garment restoration and preservation. She was friends with Clooney, who acted as something of a mentor in dealing with celebrity after French Henry won her Miss America title in 1999.

“In return, this Rosemary Clooney museum, and building her collections, has been a way to give back to her — to create this wonderful legacy of her life and career,” French Henry said during a recent NKY History Hour presentation with the BCM.

French Henry has spearheaded the accumulation of items for the Rosemary Clooney House, which is now home to more than can even be displayed, including Clooney’s movie costumes and ephemera, architectural salvage from her former Beverly Hills mansion, vintage cars and the self-described “largest collection of White Christmas memorabilia in the world.”

“We have traveled the collection to a wide variety of museums over the past decade,” French Henry tells CityBeat. “Some of the museums include the Upcountry History Museum in Greenville, South Carolina, and the Oshkosh Public Museum in Oshkosh, Wisconsin. It’s always so great to see how other museums reimagine the collection based on the space they have [for] the exhibition. The Rosemary Clooney House museum is quite limited in space as we are a ‘house’ museum. Therefore, the larger museums are able to showcase more of the complete collection.”

At the Behringer-Crawford Museum, the White Christmas exhibit spans multiple rooms. There are roughly 20 costumes in Plexiglas display cases, organized by scene or song, including Vera-Ellen’s elaborately bejeweled dance outfit from “Mandy,” Clooney’s rhinestone gloves from “Love, You Didn’t Do Right By Me” and the blue dresses and a fan from “Sisters.” 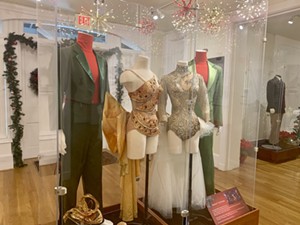 “Vera and George Chakiris were both from Norwood, right in the center of Cincinnati, so you had not only Vera and George, but Rosemary graduated from Western Hills in Cincinnati. The Tri-State area did an amazing job of producing stars for this movie,” French Henry says. “The connection of the cast to the Tri-State area makes exhibiting this collection at BCM a natural choice for us.”

“Most visitors have shared stories of their memories watching [White Christmas] as a tradition during the holiday season,” French Henry adds. “The music and the costumes are so iconic, which is unlike most movies of that age, where generally the actresses and actors are the only stars. However, in White Christmas, the costumes and songs are equally celebrated and remembered.”

The BCM also has vintage White Christmas movie posters on the wall, vignettes featuring chairs and a sign from the Columbia Inn set and bits of unique ephemera, including recently acquired mementos from choreographer Robert Alton and outfit spec sheets from costume designer Edith Head. Head created all of the costumes for the White Christmas, as well as one on display from Irving Berlin’s 1942 precursor, Holiday Inn, which first featured Crosby crooning the song “White Christmas.” That costume — a star-spangled chorus girl outfit — makes several Easter-egg appearances in the background of the later film.

“Edith Head is arguably the most important and influential costume designer in cinematic history,” French Henry says. “She won eight Academy Awards and had a career that spanned nearly 60 years in Hollywood. Her work with both Paramount Studios [which distributed White Christmas] and Universal Studios is regarded as the gold standard in costume design.”

Head didn’t win an Oscar for White Christmas, but that doesn’t make the garments any less memorable to see in person for their detail, design and deference to Vera-Ellen’s 18-inch waist – and for their unique history.

“A majority of the costumes that we’ve been able to find around the world — because some of them have come from as far away as Scotland or London, some here in the United States, from the state of Washington, from cities like Las Vegas — most of them we’ve been able to restore back to somewhat of their former glory,” French Henry says.

She says they found Clooney’s “Sisters” dress on eBay, listed under “vintage ’50s party dress,” and Vera-Ellen’s dress with a collector in Texas. It took three years to restore both dresses to their current condition.

“The ‘Sisters’ number seems to be that huge iconic [song] — outside of the ‘White Christmas’ song — that people have an emotional tie to, so when they see those ‘Sisters’ dresses, that’s like the ‘wow,’” French Henry says. 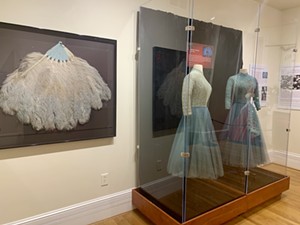 Photo: Maija Zummo
The fan and dresses from “Sisters”

The “Sisters” fan came from Paramount itself. French Henry says she initially contacted the studio, with whom she had worked as Miss America, after she was asked to make a holiday appearance in a red, fur-trimmed dress resembling the one worn by Clooney in the final scene of White Christmas.

“That was sort of their big uh-oh moment — they really didn’t know where anything was,” French Henry says.

Eventually, French Henry, a designer and her mother – a savvy seamstress – made a replica of the garment, which is on display at the BCM and is the item that launched the Clooney collection.

French Henry says that after her call, Paramount began scouring “every crevice, corner and closet” and found the “Sisters” fan, which the studio loaned to the Rosemary Clooney House as its first official piece of memorabilia (The studio actually found both fans, but one was broken, reportedly because either Danny Kaye or Bing Crosby kept playfully slapping one another with it during the filming of the scene).

“We really still thought, ‘Oh, we’ll just have Rosemary’s house; we’ll preserve it and we’ll have it open during festivals and we’ll be able to show a couple of things,’” French Henry says. “Well, one thing led to the next and Paramount found a few more items and we privately purchased a few items, and now the museum is chock full.”

But even if visitors don’t care about the costumes, the Behringer-Crawford Museum’s French says the White Christmas exhibit has multiple stories to interest museumgoers.

“There’s the holiday tradition of it. There’s the story of Edith Head, the design, the design elements of it, the individual stories of the actors and the actresses, and the people involved in it,” he says. “The fact that it’s really one of those post-World War II movies that’s addressing veterans' issues — it’s really the only Christmas movie that does that at all. ‘What do you do with a general? What do you do when people are coming back from the conflict broken?’ You can pull this film apart and there’s so many layers of fascinating history to it.”

French Henry has even set up a philanthropic arm of the traveling exhibit called Operation Waverly, named after the film’s General Waverly (owner of the failing Columbia Inn), which benefits veterans. And the Behringer-Crawford Museum is collecting items for the Ohio Valley Goodwill veterans transition program.

In addition to all of that, the film also has “this really great local connection,” French says. “There’s a lot of talent from our region, and we like telling those stories.”