The Sounds of Musicals at the Aronoff

Touring productions presented as part of 'Broadway in Cincinnati' this season include 'The Sound of Music,' 'Matilda the Musical' and 'Beautiful — the Carole King Musical.' 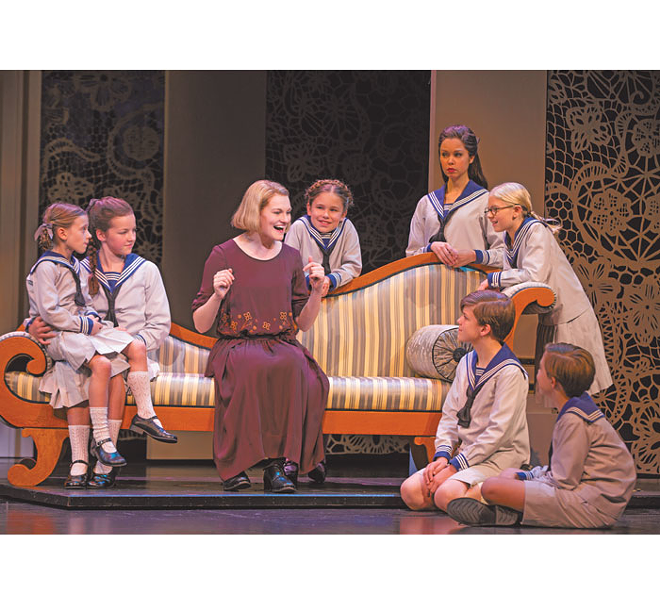 Photo: Mathew Murphy
Kerstin Anderson (center) plays Maria in 'The Sound of Music.'
Although it’s called “Broadway in Cincinnati,” the touring productions presented at the downtown Aronoff Center for the Arts might be more accurately labeled as “Broadway Musicals in Cincinnati.” The series seldom offers dramatic plays, and only occasionally presents shows that step beyond musical theater. There’s a reason: Musicals sell tickets, and audiences flock to see them. The Sound of Music, currently onstage through Oct. 9, kicks off the 2016-17 Cincinnati season.

Rodgers and Hammerstein’s legendary show premiered in 1959 and ran for four years on Broadway. The story of the postulant Maria and her musical success with the unruly children of the Von Trapp family elevated to an international phenomenon with the 1965 film featuring Julie Andrews. What’s onstage at the Aronoff is a brand-new production that will surely appeal to audiences of all ages, not unlike the live production that aired on NBC in December 2013.

Four additional touring productions constitute the Broadway in Cincinnati season, with several additional options. Another family classic, The Little Mermaid (Jan. 17-29, 2017), is a Disney stage rendition of its popular animated film. It’s the story of Ariel, weary of flipping her fins and eager to be on dry land. All the film’s characters are on hand.

A more mature production, Something Rotten! (Feb. 21-March 5, 2017) will appeal to literate audiences. Set in 1595 England, it’s a comedy about two brothers, Nick and Nigel Bottom, trying to write the world’s first musical based on some questionable advice from a thoroughly unreliable soothsayer. Their aim is to eclipse the limelight being hogged by Shakespeare, portrayed as an Elizabethan Rock star. It’s a hilarious satire on musicals and theater, full of slapstick everyone can enjoy whether or not they get all the gags.

Matilda the Musical (April 4-16, 2017) will be another hit with families, based on Roald Dahl’s beloved novel about a spunky, telekinetic 5-year-old with a vivid imagination. She loves to read and she overcomes obstacles caused by adults at home and at school; she also helps Miss Honey, her browbeaten teacher, reclaim her life. The show won a dozen Olivier Awards in London and five Tonys on Broadway in 2013. It continues onstage in both London and New York City.

The season will wrap up with Beautiful – The Carole King Musical (May 2-14, 2017), a nostalgic jukebox trip down memory lane for Baby Boomers. It features Pop hits from the late ’60s and early ’70s, including “I Feel The Earth Move,” “One Fine Day,” “(You Make Me Feel Like) A Natural Woman” and “You’ve Got A Friend.” It won two 2014 Tony Awards, including Best Leading Actress in a Musical for Jessie Mueller, and its cast recording earned a 2015 Grammy. It continues to play on Broadway. The tour features Abby Mueller, the younger sister of Jessie, as the beloved singer-songwriter.

The season offers two additional shows, inviting subscribers to choose one to complete their package. I imagine serious musical fans won’t hesitate to choose the witty musical A Gentleman’s Guide to Love and Murder (Jan. 3-8, 2017). Its one-week run suggests that it’s not expected to draw big crowds, but it was the 2014 Tony Award winner for Best Musical. The black comedy, inspired by a 1949 British film, Kind Hearts and Coronets, is a farce about a distant heir who works to knock off eight relatives standing between him and a family fortune. For the stage production, the same actor plays all eight characters.

The other “season option,” The Illusionists (March 21-26, 2017), is a one-week magic showcase featuring seven of today’s most entertaining performers; not exactly traditional theater, but certainly theatrical.

Two more works are offered as special engagements, and they’re shows that have had multiple engagements locally, but never fail to draw audiences. The Phantom of the Opera (Nov. 15-27) gets two weeks of a new touring production by the show’s original producer, Cameron Mackintosh. The other special presentation will be the ultimate feel-good show using ABBA’s greatest hits, Mamma Mia! (March 10-12, 2017).