Named after a giant steam-whistle circus organ, Calliope Sweets' pastries run the gamut from sculpture-esque cakes to classic pastries to gelatin molds of all shapes, sizes, colors and flavors.

Consider, if you will, the gelatin mold. Sixty years ago you’d be hard-pressed to find a household that didn’t have one nestled in a cupboard with the bundt pans and pie plates. Jelly desserts and gelatin-encased foods were expected at dinner parties.

These days, your best shot at finding a gelatin mold is next to the tarnished kitchenware at your local antique store. At least that’s where Amanda Bowman finds hers. Through her home-based baking business, Calliope Sweets, she’s putting jelly desserts (as well as cakes, cookies, pies — you name it) back on the table after decades of dormancy.

[PHOTOS: A Look at Some of Calliope Sweets' Most Vibrant Cakes and Gelatins]

Bowman founded her bakery in January and named it after the giant steam-whistle organ popularly played at circuses. She’s always loved Pierrot clowns (as evident on Calliope’s logo) and the circus tie-in nods to her “irreverent and whimsical approach to pastry,” Bowman says. She isn’t timid about using psychedelic color palettes and concocting unexpected flavor combos in her work, and she has the longtime culinary expertise to whip up just about anything requested of her.

Bowman’s pastries run the gamut from sculpture-esque cakes to classic 1960s-era pastries to gelatin molds of all shapes, sizes, colors and flavors. But the latter has been her particular fascination over the last year.

“(Gelatin is) really playful and almost mysterious,” she says. “I kind of like that it’s something really beautiful but also a little bit gross at the same time.”

Beyond its weird science-defying constitution, gelatin has a roller coaster of a history. In the beginning, gelatin was almost exclusively for those in bourgeoisie circles. “Before refrigeration, it showed you had a whole team of people behind you creating this (dish), and when it sat on your table, it was a status symbol,” Bowman says. As early as the 10th century, people were using aspic (essentially meat-stock jelly) to encase savory foods, especially in fine dining — a trend that carried on for centuries up until recent decades. Creating gelatin back then required extracting collagen from the bones of livestock or fish, an undertaking that most couldn’t afford.

Several hundred years later, the patenting of powdered gelatin coupled with accessible refrigeration caused gelatin desserts to “develop this kind of pedestrian, everyday connotation,” Bowman says, which is where the gelatin mold as we know it comes into play. A popular trend even into the 1980s, gelatin salads and desserts eventually began to lose their mainstream appeal. Decorative molds went out of style and were donated to thrift stores.

Now, for the first time in decades, gelatin is coming back into trendiness. Bowman witnessed its renaissance in her side gig as a freelance food stylist, where she’s been seeing gelatin used in marketing. The concoction has gone through drastic changes in social status since its invention, which is partly what makes it so interesting to Bowman.

“I really love the high-brow and low-brow connotation of gelatin,” she says. “I think it almost has an exotic sort of connotation, but it can’t escape being low-brow at the same time.” 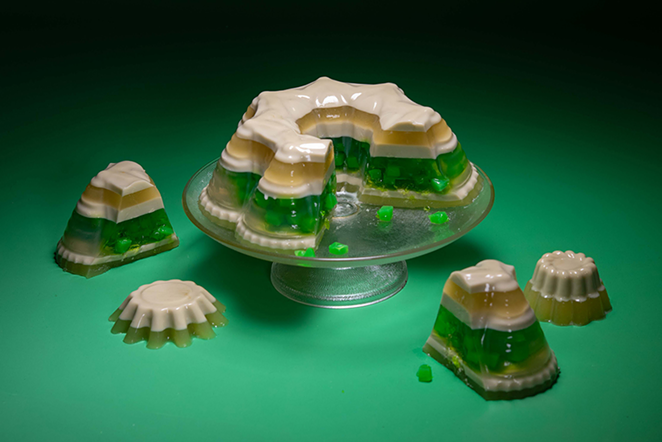 Before Calliope, Bowman had been cooking in restaurants and baking on the side for more than a decade. In professional kitchens, she says, “you really have to take your food seriously and fit into certain confines. Now, I feel like I’m going in a different direction where I’m going to do this on my terms.”

Bowman freelances exclusively these days, which can be both a blessing and a curse. She has a lot of scheduling freedom this way and complete control over the timing of her work weeks, but “if you pass up work, that’s your bread and butter, so I generally say yes to everything,” she says.

Bowman operates Calliope through Instagram (@enjoycalliope) since she’s a home-based baker. The best way to start a conversation about ordering jellies, layer cakes or anything else you can dream up is to simply shoot her a message. Bowman works mainly from special requests and appreciates the challenge of creating for different dietary needs.

Bowman says she once received a request for a veganized opera cream cake, an indulgent dairy-and-egg-laden dessert, which meant she had to “break every recipe down and really think about how to substitute each (animal-based product) for something vegan,” Bowman says. “It’s very fun to push your boundaries and test new recipes.”

The same goes for gluten-free baking, for which she receives a decent amount of requests, as well. Bowman goes the extra mile for her clients by blending her own gluten-free flour so she can have full control over the texture of those pastries.

While she rarely turns down requests and is happy to fulfill them (as long as she has time), she delights in the rare client who grants her full creative freedom.

“I love the challenge of somebody telling me, ‘I love this ingredient; other than that, you can do whatever you want,’” Bowman says.

Bowman’s most recent full-freedom request was commissioned by a fellow artist who asked her to make a “campy cake,” which she interpreted two ways — “campy” as in outdoorsy, and “campy” as in wacky.

“The vintage cake aesthetic, I would consider campy, so I incorporated the frilly buttercream elements,” she says.

Bowman drew inspiration from a recent trip to Red River Gorge, where she and her friends sat around a campfire on a moonless night. “I was thinking about edible celosia flowers and how they look like spires of fire, so I decided to build an edible flower arrangement on the top of the cake that looked and felt like a glowing campfire,” Bowman says.

As for the future of Calliope, “there’s no solid plan,” Bowman says. Her husband owns The Lodge in Dayton, Kentucky — a recording studio and art collective in a former Masonic Lodge that has been sectioned into studios and rented to area creatives — and they plan to build out a commercial kitchen for Calliope to grow into.

“We’ve always talked about having a pick-up window out of The Lodge. I’ve always loved the idea of doing a creamy whip type thing but with pastries,” Bowman says.

See Amanda Bowman’s creations and message her about orders on Calliope Sweets’ Instagram at instagram.com/enjoycalliope.