Playhouse shows will move to three venues around town this season. 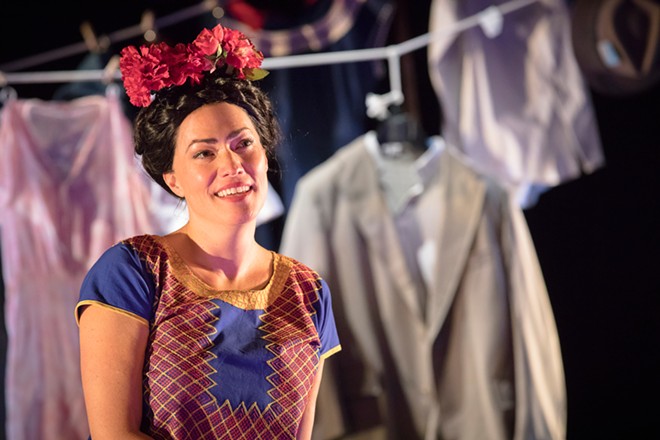 Photo: Owen Carey for Portland Center Stage
Vanessa Severo stars as Frida Kahlo in and wrote the script for Frida … A Self-Portrait.

The Cincinnati Playhouse in the Park will not produce shows in Eden Park this fall. The Marx Theatre, the Playhouse’s longtime mainstage, has been demolished to make way for the new “Moe and Jack’s Place – The Rouse Theatre.” For several months, access to the existing Rosenthal Shelterhouse Theatre will also be restricted.

The Playhouse’s producing artistic director Blake Robison tells CityBeat that he got the idea from Atlanta’s Alliance Theatre.

“When they had to take a pause for a giant renovation there, they took a whole season off-site, a season of plays in different neighborhoods all over Atlanta. That inspired us to dig in and see if we could do it in a smaller way — just for the fall, not the whole season,” Robison says. “We loved the idea that we’re going into different neighborhoods, running into different people, making new friends and inviting them back to Eden Park when we open the new theater in March.”

Each production has been matched specifically to the venue.

“All three [venues] were very cooperative and eager,” Robison says. “We need a venue that can accommodate all of our subscribers and all of the many single ticket buyers who are going to come to see it.”

Up first will be Ken Ludwig’s popular adaptation of Agatha Christie’s Murder on the Orient Express at the Jarson-Kaplan Theater, opening on Sept. 25. The Playhouse anticipates that it will be hugely popular, recalling interest in prior best-selling productions of Christie’s mysteries: Ten Little Indians in 1982 and again in 2002; The Mousetrap in 1995; and Witness for the Prosecution in 2006.

Murder on the Orient Express was developed as a co-production between the Playhouse and Indiana Repertory Theatre in early 2020. It’s the story of ten passengers on a luxurious train traveling from Istanbul to Western Europe. After an unexpected stop in the snowy mountains, only nine are still alive — and everyone else is a suspect. Finding the killer is the task of Christie’s renowned detective Hercule Poirot.

“Indiana got their half in early in 2020, and then March of 2020 hit, and we weren’t able to do the second half of the co-production,” Robison explains. “We have the same creative team and the same director, but the show had to be re-designed for the Jarson-Kaplan instead of the Marx Theatre.”

About half of the original cast was still available, including actor Andrew May, as Poirot, he adds.

The Playhouse’s other two off-site productions are solo performances – the kind of shows typically presented in the Rosenthal Shelterhouse Theatre. Frida … A Self Portrait (Oct. 15-Nov. 6) is slated for the Carnegie. It’s an imaginative show about Mexican painter Frida Kahlo, developed by the Playhouse’s new associate artistic director Joanie Schultz. Robison traveled to Portland, Oregon, to see it staged there when Schultz was being hired. It stars Vanessa Severo, who also wrote the script.

“The piece itself and the performer are magnetic, physical, and inspirational,” Robison says. “I thought this would be a great greeting card for Joanie to bring to Cincinnati – her way to say, ‘This is who I am, this is what I bring to the table as a theater director.”

At the Incline Theater in Price Hill, the Playhouse will offer The Lion (Nov. 12-Dec. 4).

“This show was a big hit off-Broadway several years ago, and it’s something I’ve been aware of for a while,” Robison says.

The one-man show portrays a singers-ongwriter who tells his family’s stormy story, presenting his tale with monologues and songs and using six different guitars.

“It had a small tour to regional theaters, which we were not able to get at the time,” Robison says.

After the depths of the pandemic, it was produced in London. Knowing of Robison’s interest, the director planned to bring it to his theater in Arizona and asked if it might work in Cincinnati.

“I said absolutely we wanted it,” Robison says. “It’s a really sincere, lovely biographical story, told as a folk musical. He tells the story of his young life, and it’s mesmerizing.”

Robison says that the welcoming nature of Cincinnati’s theater community made it possible for them to collaborate with other local companies.

“I certainly hope that these collaborations mean positive relations for the future,” Robison says. “Everyone has been really enthusiastic and cooperative. I think Cincinnati is recognized and well known as a friendly arts community — we don’t think of each other as the competition. We really are in a rising-tide-lifting-all-boats sort of community. So everybody wins in this fall season.”

This is an opportunity for Playhouse subscribers to visit other Cincinnati theaters and see productions elsewhere, Robison adds.

The Playhouse’s new mainstage, the Rouse Theatre, has been designed as an up-to-date production facility offering a full array of modern theater technology. It aims to enhance the Playhouse’s ability to attract top talent — actors, directors and designers. There also will be an increased potential for co-productions with other theaters and for tryouts of Broadway-bound productions. The Rouse Theatre will have its grand opening in March 2023.

One of Broadway’s greatest musicals, A Chorus Line (March 11-April 15) will be the first Playhouse production performed at the Rouse Theatre. The Shelterhouse season gets underway with The Chinese Lady (March 25-April 30). The Rouse Theatre will offer another Playhouse production of one of August Wilson’s memorable “Century Cycle” plays, Seven Guitars (April 23-May 14). The season wraps up with two world premieres: a comedy, Origin Story (May 20-June 25) in the Shelterhouse, and a mainstage adaptation of the great Western film Shane (June 3-25). The latter is a co-production with the renowned Guthrie Theater in Minneapolis.

The Cincinnati Playhouse in the Park’s 2022-2023 opens with Murder on the Orient Express on Sept. 25 at the Aronoff Center’s Jarson-Kaplan Theatre. Info: cincyplay.com.