Despite the unusual circumstances of this year, Tammie Scott has been hard at work. She's putting the finishing touches on her new Over-the-Rhine bar, Nostalgia Wine & Jazz Lounge, which will feature bottles from women and minority winemakers, as well as eight wines on tap, live music, a limited selection of spirits and beer, and small plates from local businesses. Nostalgia will host its grand opening on Aug. 21.

Scott has been gradually developing her plans for Nostalgia for five years now, using her own engagement with wine culture to conceptualize what kind of experience she wants to offer. While in grad school for business at Howard University in Washington, D.C., the Cincinnati native frequented a handful of Jazz and wine bars that encouraged a more accessible approach to wine tasting. “As I got older, I wasn’t as intimidated by wine culture anymore,” Scott says. “It’s just if you like it or if you don’t like it.” That accessibility is one of the main ideas behind Nostalgia. The bar aims to make wine feel more inclusive — and not just through less intimidating ordering. A big part of Scott’s plan is to offer a menu featuring wines made by women, and specifically Black women. “There are winemakers out here who look like me,” she says. “And typically when we think of winemakers, that’s not the first picture that might come in to our heads.” A recent article by The Guardian's wine writer Fiona Beckett states that only about 0.01% of the wine produced in the U.S. is Black owned. And according to a survey from Santa Clara University, just 10% of the lead winemakers in California were female as of 2018. Scott says that minority winemakers are a growing part of the industry, and she intends to be there to support their development. One of the challenges that comes in showcasing more diverse winemakers has to do with distribution. It’s taken some effort to get distributors to carry the wines she wants to bring in, wines that she finds by research or through the guidance of her on-staff wine educator, Desiree Harrison-Brown. As soon as Nostalgia opens, they plan to host a series where winemakers will come in and discuss how they got in to the wine business, and how their process works. In Scott’s experience, hearing the process is part of what draws people closer to the wine — it provides a connection with the winemakers beyond a label on a bottle, and gets people engaged with the wine on a personal level instead of just trying to find the right tasting notes. “Being able to connect people with the actual winemakers is important to me,” Scott says. Live music is another part of the Nostalgia package. Scott wants the bar and lounge to be a place where people can gather in an inclusive environment, where the focus is on enjoying wine and music with friends. Some of her favorite wine bars back in D.C. hosted music nights, but a lot of her inspiration actually comes from within our city limits. “My grandmother used to tell us all stories about the Cotton Club back in the '40s,” Scott says. The Cotton Club — named after the Cotton Club Jazz club in Harlem — was located in the Sterling Hotel in Cincinnati's West End. It was a hot spot for Jazz, hosting artists like Duke Ellington and Sarah Vaughan. At the time, it was the only integrated nightclub in Cincinnati. “It was really the only place where people of all walks of life could get together and find a commonality in their love for hearing some live music and coming to have a good time with some friends,” Scott says. Hearing stories about old Jazz clubs like the Cotton Club and the Blue Wisp gave Scott a desire to bring that back to Cincinnati. Scott felt she’d had a taste of something similar in D.C., but she wanted her native city to have that again, too. “I’m a very nostalgic person,” she says. “I’m very young but I have the oldest soul. (Nostalgia is) a way for me to bridge the gap between good times that my grandmother used to have and good times that I had experienced in D.C.” That’s where the name of the bar originates — a longing to recreate the types of experiences her grandmother and others had at these old-school clubs. And Scott worked with designers to build a space that reflects that spirit, what she defines as “dark, moody, and classy.” Once they’re open, Nostalgia will host live music each night of business, Wednesdays through Sundays. Scott has brought her brother — a recent University of Cincinnati College-Conservatory of Music Masters Program graduate in Jazz Studies — on board as the music programming manager. They’re planning to host Jazz nights on Thursdays and Sundays, with Soul and R&B on Fridays and Saturdays. Wednesday nights will be Wine Down Wednesdays, with Soul-inspired DJ sets from DJ Prymtime. It’s a weekly tradition that’s already thriving on Nostalgia's Instagram Live. Scott has been keeping the Nostalgia social media platforms busy and engaging ahead of the official opening. In addition to the live DJ Prymtime sets every Wednesday, the Instagram Live feed occasionally hosts winemakers sharing their stories. Nostalgia Wine & Jazz Lounge is located at 1432 Vine St., Over-the-Rhine. Follow Nostalgia for updates and virtual engagements at facebook.com/NostalgiaOTR or on Instagram @nostalgiaotr.
Scroll down to view images

The bar at Nostalgia 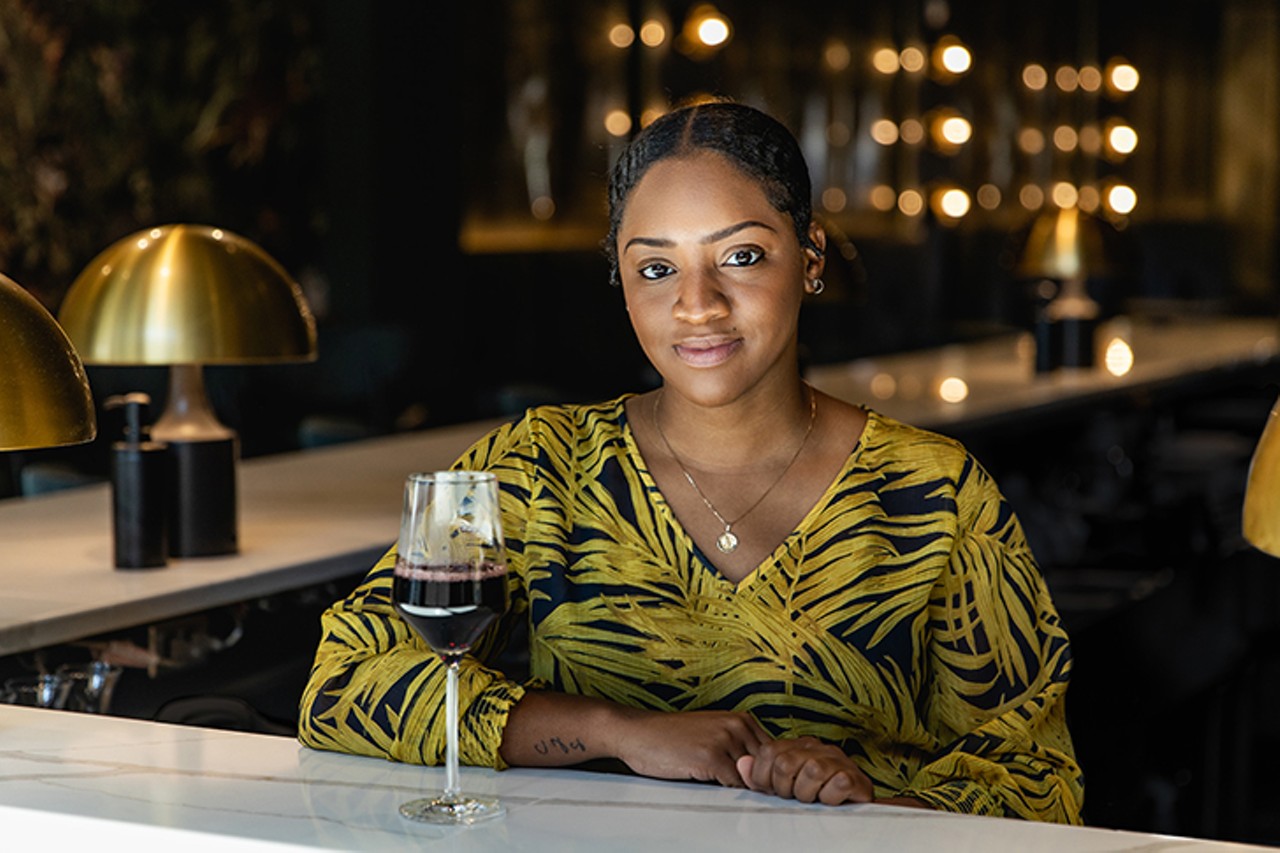 Tammie Scott, owner of the lounge 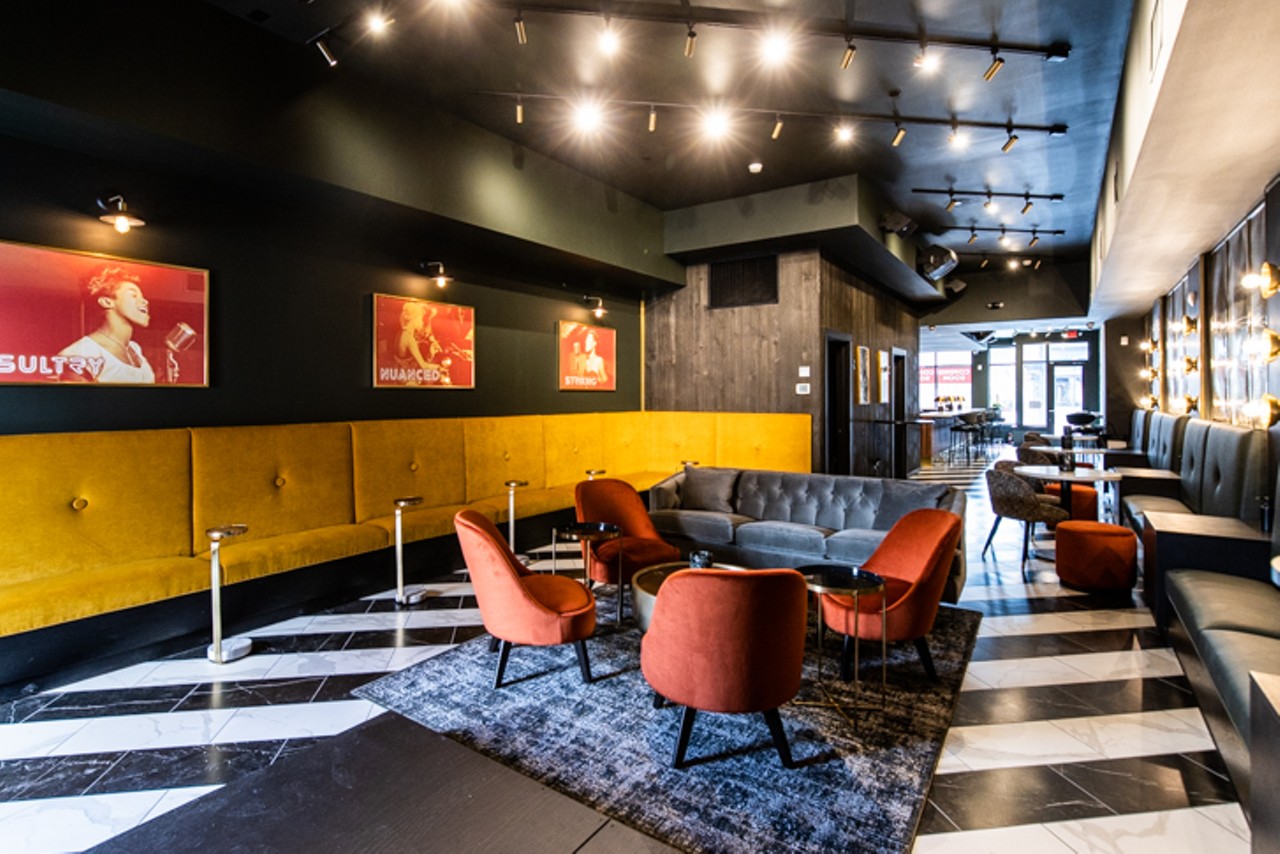 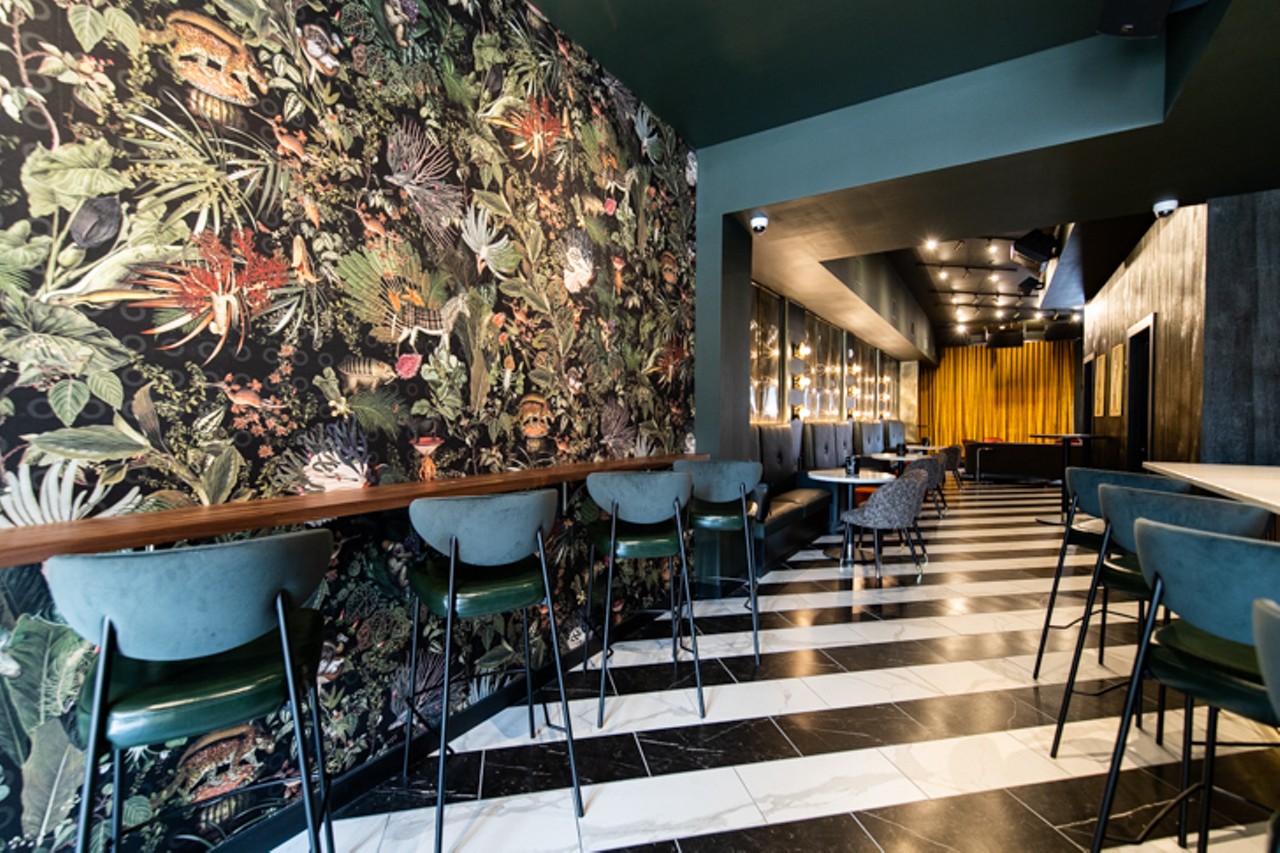 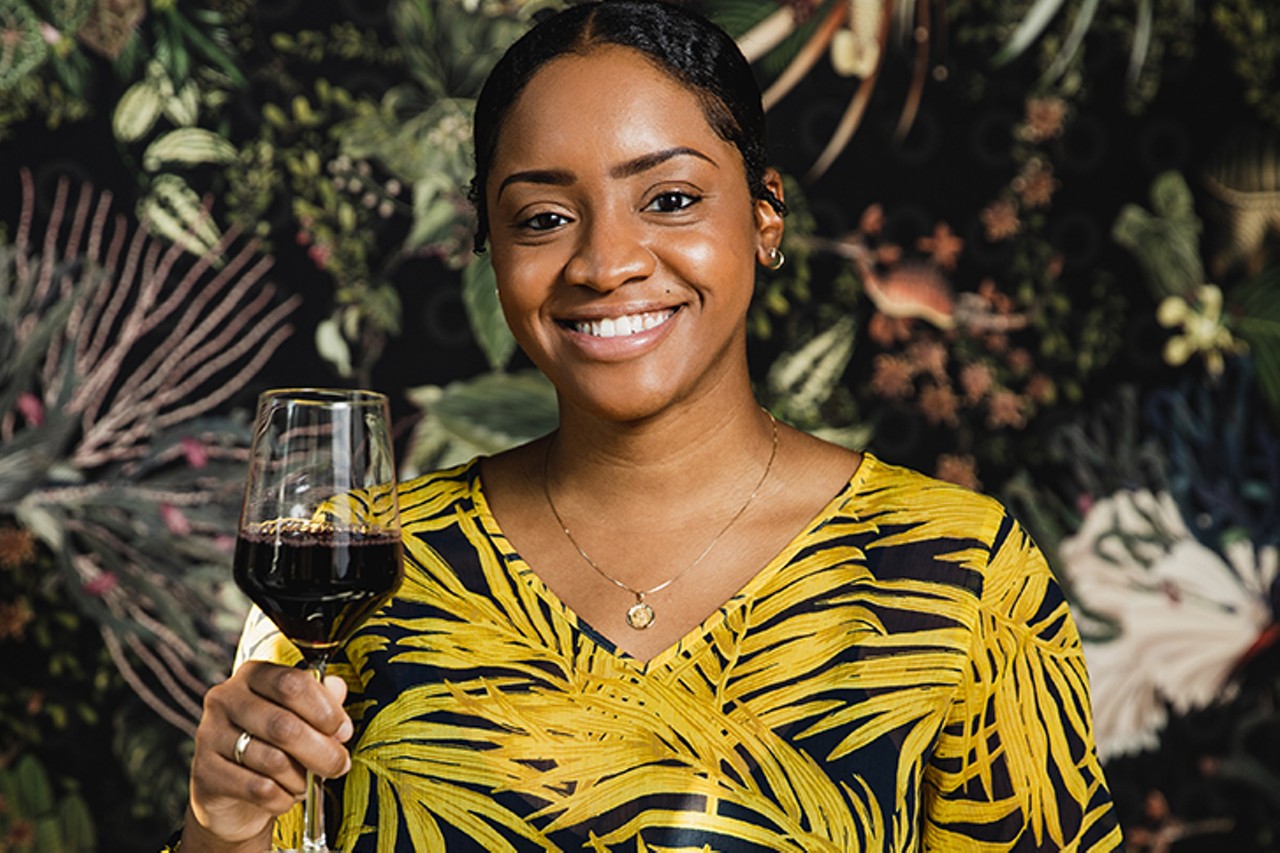 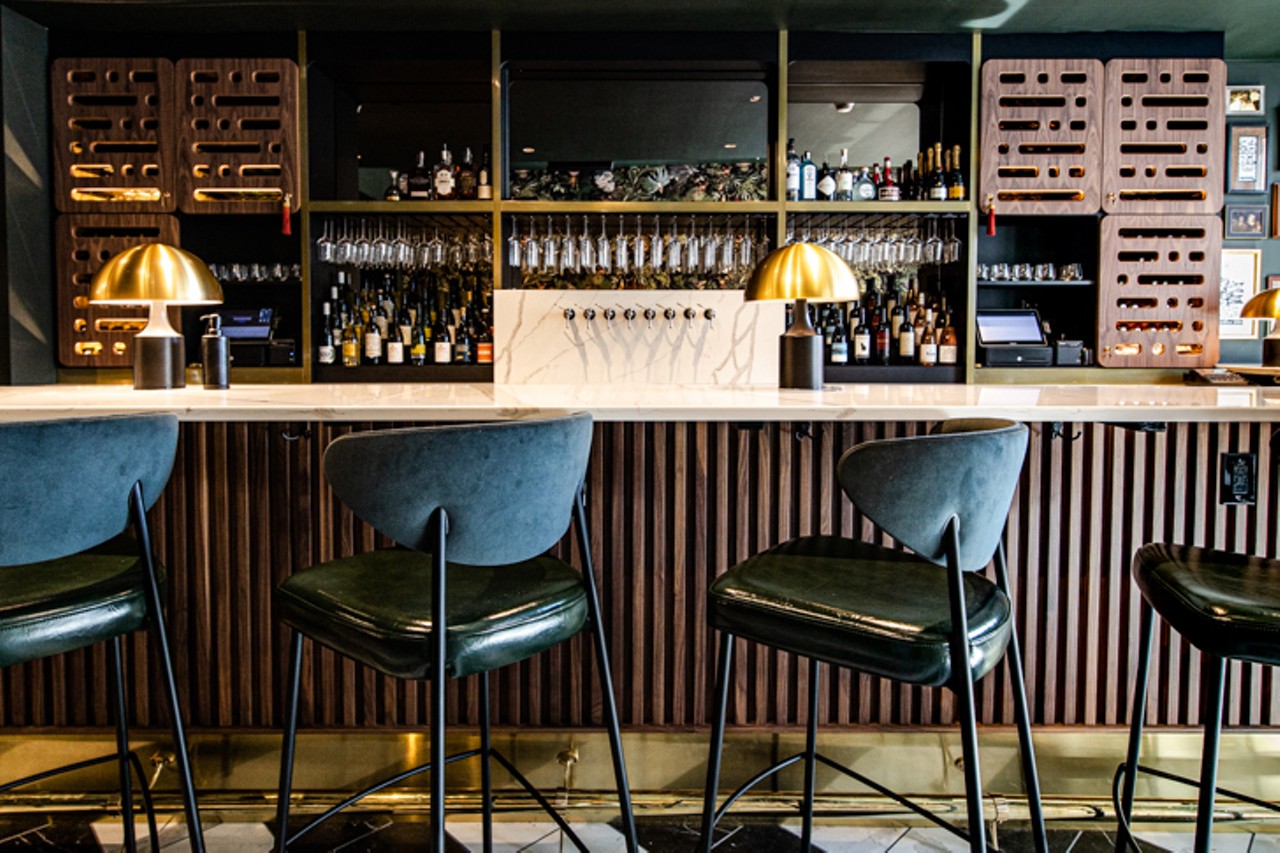