“They said it was too ambitious — that Cincinnati’s not going to get it,” Trevino says with a smile. “Tons of people will tell you not to do something, you know?”

As the founder of Gorilla Cinema Presents, a local company that creates concept bars and experiences inspired by films, he had dreamt of Tokyo Kitty for three years before it opened its doors.

Much like the Video Archive, Trevino’s Quentin Tarantino-themed “video store speakeasy” in Walnut Hills, Tokyo Kitty looks unassuming from the street. Walking through the front doors, you enter a purposefully sterile airport security-themed lobby and ID check point. Once your ID is approved for lift off, you head through the only other available door, which leads you to an Alice in Wonderland-esque room decked out in neon and mirrors before entering the bar itself. The experience leaves you as dazzled as Tokyo Kitty’s interior. It’s also a nod to one of the bar’s inspirations, Lost in Translation.

Tokyo Kitty’s décor is ambitious. As is the drink menu. And the uniformed workers. And the anime playing on a huge flat screen near the front of the bar. And the mainstage karaoke podium. And the use of robots to deliver drinks. Everything about Tokyo Kitty is maximalist and futuristic, and very well something that lil ol’ Cincinnati might not “get.”

But with the success of the aforementioned Video Archive and Trevino’s The Shining-themed Overlook Lodge in Pleasant Ridge, Gorilla Cinema seems to have pulled off this fantasy dreamland almost effortlessly. Together they imagined what the future of bars and interacting with your friends could look like.

“The team makes it come to life and spurs these experiences,” Trevino says. “We want to push the envelope and make things not just amazing, cool and magical for Cincinnati but also for the country.”

The main room of Tokyo Kitty is a bar and large karaoke space, glowing with colorful neon ceiling panels, so be prepared to hear (or do) some belting if you’re just stopping by for a drink.

There are also private, themed karaoke rooms you can reserve for parties. Themes range from “anime” or “museum,” with maneki-neko lucky cat figurines, to “tea” and “Suntory,” the Japanese whiskey brand featured in Lost in Translation (the bar also has pink wigs you can wear, just like Scarlett Johansson in the film’s famous karaoke scene). Room prices range from $20-$50 per hour depending on the day, and your room theme is randomly assigned.

If you do book a private room, don’t worry about feeling ignored by the hospitality staff, because you’ll have a robot taking care of you.

Before visiting, I’d heard whispers of a magical robot that delivers drinks on a conveyor belt right to your hands and had been picturing a cross between The Jetsons’ Rosie and a Roomba vacuum with a Cosmo balanced precariously on top. While sadly faceless and not in a maid costume, Bbot will still make you feel like you’re living in the year 2062. The robot delivery system was tailored to Tokyo Kitty’s exact needs.

While sitting in any of the private rooms, simply access Bbot through the Bbot website on your phone, order whatever drink you want and soon it will come down on a tray through a hole in the ceiling. If this is something you can’t even wrap your mind around, go to Tokyo Kitty and see it for yourself.

“Bbot is the silent hero of next-level service. He never gets tired, loves to entertain and is always online,” reads the Bbot company website. “We think that robots are for everyone, not just for people in Silicon Valley.”

The house cocktails that Bbot delivers do not disappoint. After all, if you’re crafting drinks to be delivered via robot, you have to capture a certain je ne sais quoi.

I sampled the Kumamon ($8) and Uniqulo ($9). The Kumamon is a sweetly tart drink with lemongrass-infused tequila, lime, a passion-fruit-and-hibiscus cordial and ginger beer. The Uniqulo has cucumber-infused vodka, a Midori and velvet falernum blend, lemon and soda. Both meshed international elements I would never have thought to pair together (tequila and ginger beer?), somehow making it work. Both were all too drinkable and gone in less than 10 minutes.

This is not just a bar created by someone who watched a few episode of Naruto and went for it. There’s passion and respect at Tokyo Kitty for Japanese culture, and how that culture gives and takes with both Cincinnati and America. Trevino himself grew up in Houston, Texas hanging out with first generation Asian-American friends. He went to karaoke bars in his hometown and Austin and saw how they brought people together. The cultural exchange inspired him as a child and now as a creator of bar experiences.

“We celebrate the intersection of Japan and America here,” he says.

It’s safe to say that Cincinnati agrees. Before I even went to scope the place out for this story, I saw Tokyo Kitty popping up on basically all of my friends’ Instagrams — and I’m someone who prides herself on being the first to go to new places. But that’s the kind of impact that Gorilla Cinema has — the group has fans willing to jump headfirst into whatever bar experience or pop-up they create because it’s always going to be unforgettable.

The evening I went, the place was packed for industry night. I sang until my voice was sore, both in the safety of a private room as well as the main room. When I left, the stillness of my Uber home made me realize how immersive the Tokyo Kitty experience was. While there, you really feel like you’re worlds away. Not really in Japan, not really in America, but in a future world that marries the two countries seamlessly. 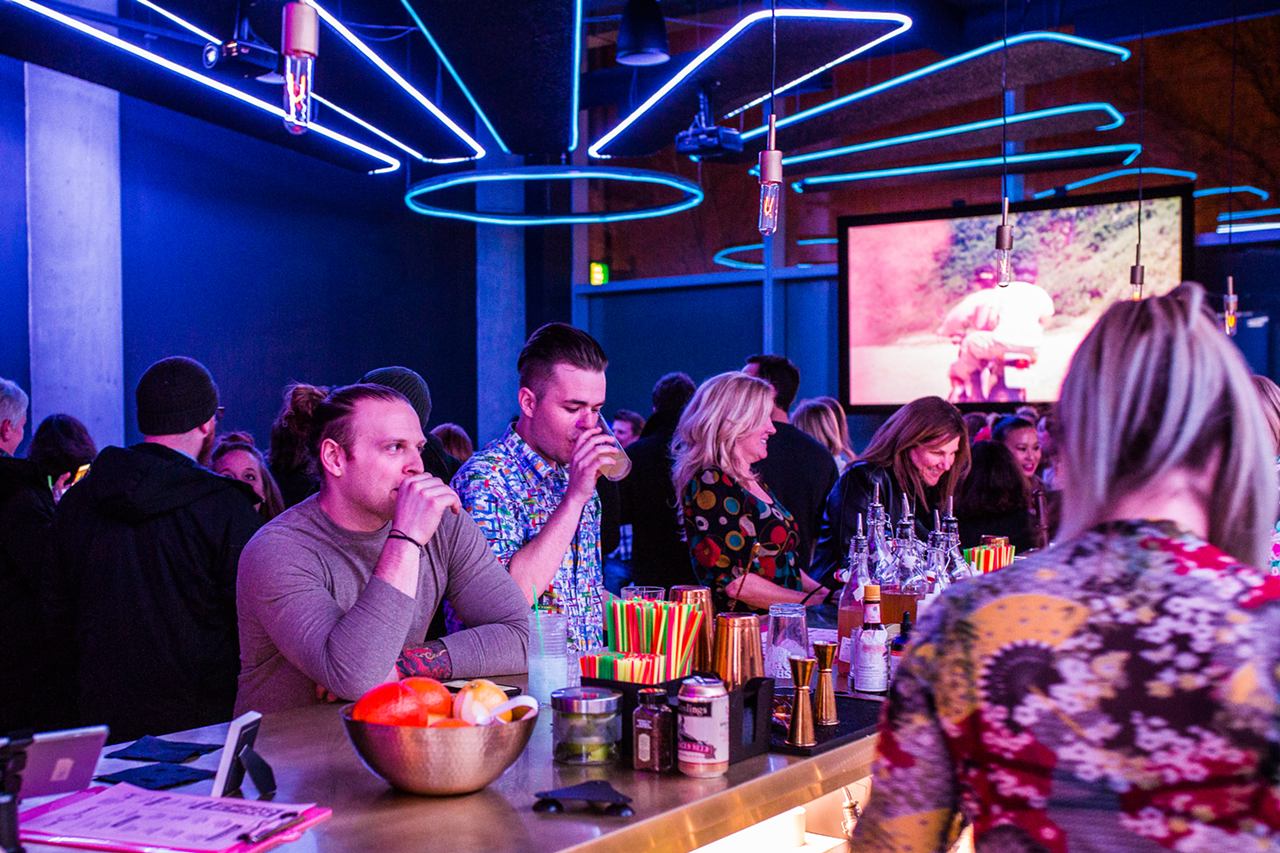 Photo: Hailey Bollinger
"Once your ID is approved for lift off, you head through the only other available door, which leads you to an Alice in Wonderland-esque room decked out in neon and mirrors before entering the bar itself." Photo: Hailey Bollinger
"The main room of Tokyo Kitty is a bar and large karaoke space, glowing with colorful neon ceiling panels, so be prepared to hear (or do) some belting if you’re just stopping by for a drink." Photo: Hailey Bollinger
Private karaoke rooms have themes like "museum," "Suntory" and "anime." Room prices range from $20-$50 per hour depending on the day, and your room theme is randomly assigned.