Mononymous and anonymous Cincinnati street artist Technique2012 specializes in blending humor, pop culture and social commentary in their singular creations. Pasted throughout the city, spotting one of Technique2012's pieces offers a moment of irreverent joy, as the best street art does — an unexpected, welcome and often thought-provoking interruption in the day-to-day. A graphic design graduate of the Art Academy of Cincinnati, Technique2012 tells CityBeat via email they "became frustrated with finding work in my particular field so (I) decided to start just doing my own thing and putting on my own self-funded art shows — Thunder-Sky, Inc.'s See Ghosts Clearly, Organized Chaos at The Comet — and branding myself to be an independent artist without much help from outside sources to get my art out into the world by way of the streets." Inspired by street artist ROA, whose BLINK 2017 mural Technique2012 helped with, as well as Cincinnati's iconic 2004 Beautiful Losers: Contemporary Art and Street Culture exhibit at the CAC, Technique2012 says they also find inspiration in the work of poster artist Drew Struzan, Greg “Craola” Simkins, D*Face,  Wasson Photography, Alfred Hitchcock and an endless amount of movies over the years (their favorite is Nightcrawler). Technique2012 is working toward a third installment of their "31 Souls" project (slated for October next year) and will have a solo show at Northside's Design Collective called Americana Rebranded in August 2022. The semi-annual "31 Souls" is a "public art show for anyone who happens to find each piece in the streets." Technique2012 has been doing "31 Souls" since 2019 and the second installation spanned 13 neighborhoods and 3 states, per their Instagram. "Every piece has an accompanying story that can be viewed on their respective post through #31soulsart," they share in a post. A lifelong Cincinnatian, Technique2012 is just part of the vibrant arts fabric of this city. "(I) think we have an amazing collective of local artists and local arts scene," they tell CityBeat. Follow Technique2012 at instagram.com/technique2012. *Image descriptions and titles taken from Technique2012's instagram account.
Photos by Provided by Technique2012
Scroll down to view images 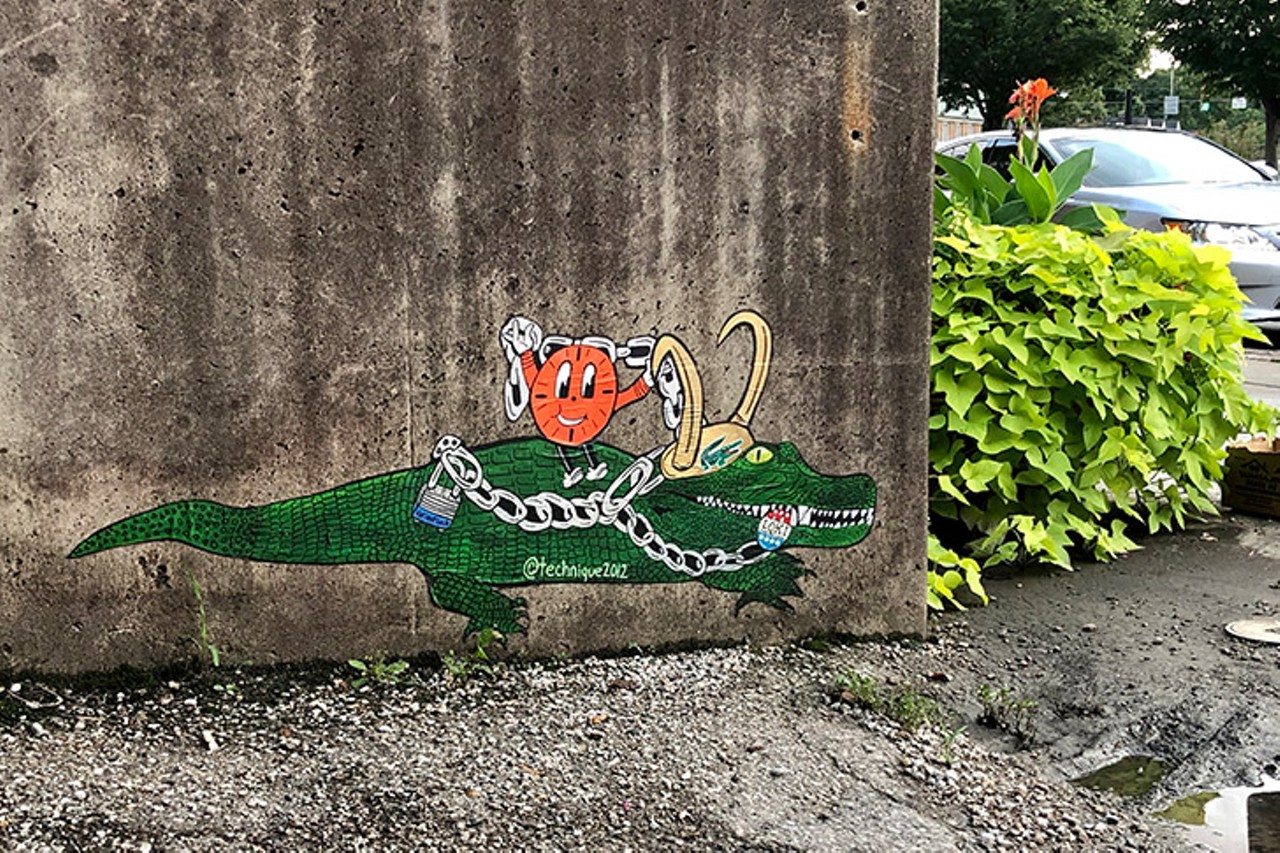 Location: Mount Lookout
Description: "Miss Minutes needs a ride to the local clock shop for repair. She hitches a ride on the newest tva arrival who is an alligator variant of loki. He decides to detour to the nearest lacoste store instead."

Location: Findlay Market
Description: "Billy the puppet is tired of working for jigsaw and wants to branch off with his own business. He starts a pedal wagon party bus called saw wagon and quickly turns a profit from local drunk college kids who yell whatttt yeahhhh and ooook all day while Usher blast from the speakers. A few months later he starts losing customers when yelp reviews start saying it’s nothing more than a tourist trap."

Location: Downtown
Description: "Milton has just gotten his newest tps report from bill lumbergh. Not only is his stapler being taken but he has been told to work remotely outside a local staples. Poor Milton is even going go miss the free birthday cake inside."

“When You Bring Me Out, Can You Introduce Me as the Mirror Ball Champion”

Location: West End (this has been buffed since pic was taken)
Description: "Murray Franklin invites Arthur Fleck to tape an episode of dancing with the stars to do his famous stair dance routine. He rocks out and plans his next moves while already having a knock off mirror ball trophy to celebrate during the dance. He receives scores of a 6, 0 and 7 because they think that’s what he deserves."

“The Sound of Sales”

Location: Hyde Park
Description: "Maria von Trapp goes shopping at the local mall and hits a high note when she spots sale signs. The mall is alive with the sound of sales or maybe that’s just the cinnabons. She sees a few hundred of her favorite things and doesn’t have a single worry about the debt she has accumulated over the years because she’ll just pay down her credit card bill with other credit cards. Sadly she realizes after all the debt the things that she owns ended up owning her."

Location: Findlay Market
Description: "Spawn needs some quick cash so he decides to sell his prized McFarlane toy collection. He takes them to Violator pawn shop but the owner Clown won’t give him anything but a store credit of $10. Spawn gets angry and vows to seek vengeance until he sees a mint copy of the hbo spawn vhs on the shelf that he can use his store credit on. He sees however it’s going to cost him his full store credit of $10. This pawn shop his his worst nightmare!"

Location: Findlay Market
Description: "Frankenstein sets out to win his bride back after a break up. He becomes the new bachelor and all the local monsters want to win his heart. He gives one freshly picked rose to his chosen contestant the bride. The one thing that really gets her attention is a pumpkin he carved of her face. He cut up his fingers using the tiny pumpkin saw but it’s a small price to pay for the true undead love only a reality show can provide." 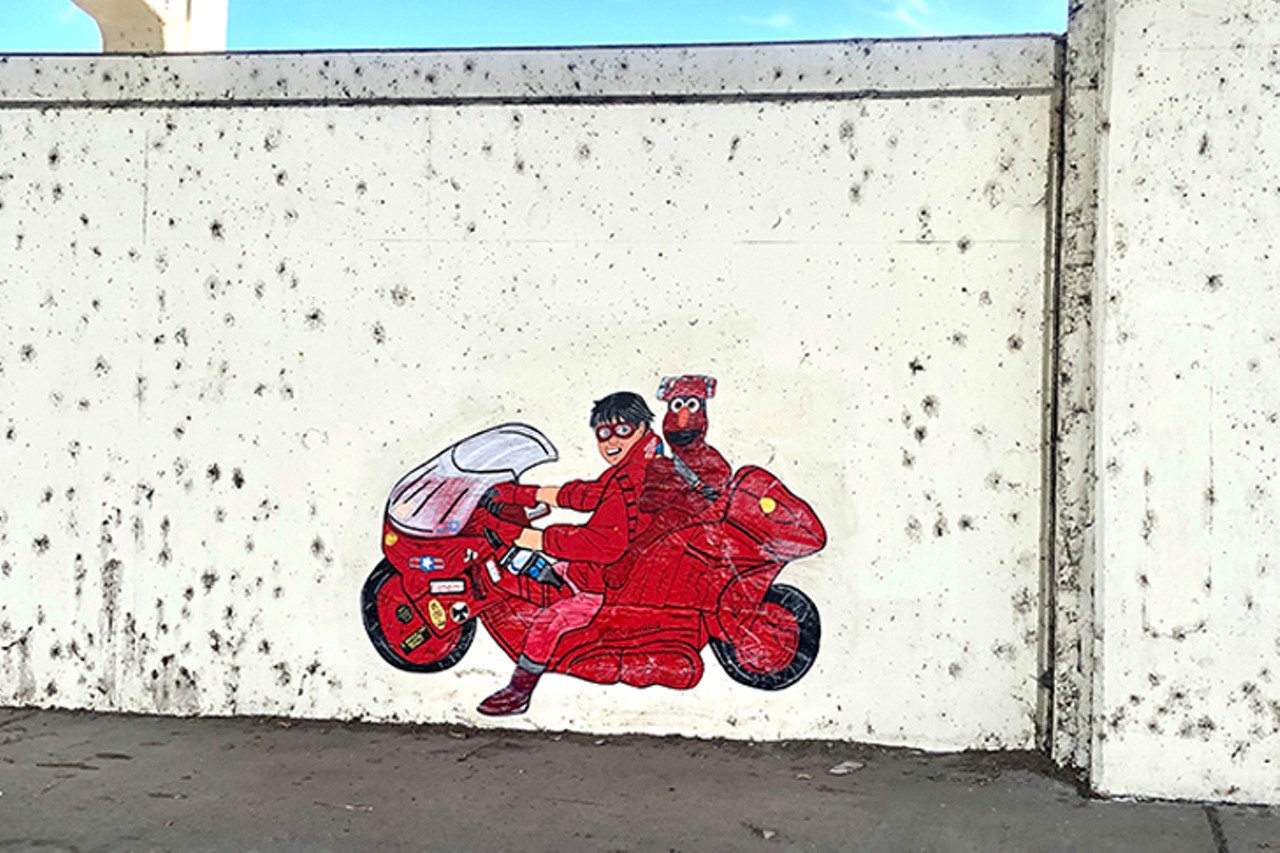 Location: Lower Price Hill
Description: "Kanedas needs some extra cash so he starts driving for uber. His first passenger elmo is a real pain in the neck. He constantly wants tickled and dropped off at the closest toy store or bar."

Location: Over-the-Rhine
Description: "Miles Morales starts his new grubhub side hustle and swings down from the rooftop to deliver his first order. He doesn’t know however that spider-ham snuck into his delivery bag and chowed down on all the customers food when he wasn’t looking. Miles has a long night ahead of him and he hasn’t even fought any crime yet."

Location: Santa Monica Beach, California
Description: "The local beach needs a new lifeguard but the only applicant who shows up is Crocodile Dundee. He list his experience as wrestling alligators and taking care of wallabies in the outback. He also has a strong sense of work ethic if you pay him extra with some white claws."