"The Haunted House Restaurant" will pay homage to the pantheon of great horror flicks, but the only thing that’s scary is how good the food is. 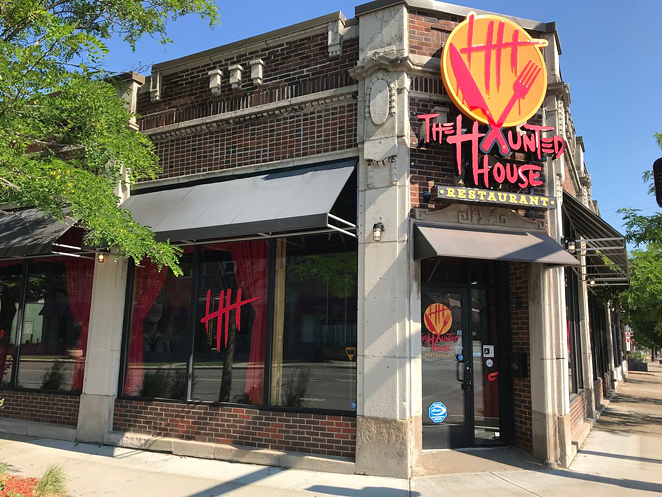 The wait is almost over for everyone curious about Northern Ohio's The Haunted House Restaurant. The spooky eatery will open its doors in the former Melt spot in Cleveland Heights on July 20, so a road trip from Cincinnati might be in order.

Unbeknown to most passersby, there has been a flurry of activity taking place behind the papered-up windows. When guests do return to the prominent space at the eastern edge of Cleveland, they will be blown away by what they discover.

“I wanted to get that element of 'What are you talking about?'” says new owner Ryan “DJ Ryan Wolf” Gullatt. “We didn’t want to do anything that anybody else has already done.”

Billed as “the Haunted House Restaurant, where the only thing that’s scary is how good the food is,” the one-of-a-kind space presently taking shape will pay homage to the pantheon of great horror flicks.

As soon as guests cross the threshold they’ll be greeted by the aroma of fresh-popped popcorn. In place of a traditional host stand is the ticket booth. Original artwork celebrates iconic characters like Pennywise, Slimer and Frankenstein’s monster. And staffers will dress in theater usher uniforms.

Along with partners Andre Scott, Jeremiah Burks and Christopher Thomas, Gullatt has enlisted some high-power help with the menu. Listed as Senior Executive Chef is Darnell “SuperChef” Ferguson, a rising star on food TV who has become something of a role model for aspiring cooks of color. Ferguson also operates popular SuperChefs restaurants in Columbus and Louisville.

Diners can look forward to “urban eclectic American dishes,” with a focus on comfort foods with a twist. A “brinner” section will offer breakfast-for-dinner plates like French toast and waffles.

The 125-seat restaurant, which is being designed by Wright Spaces, will be a fun, family friendly place showcasing feel-good music. Kids will be encouraged to dress up like their favorite character or superhero.

Check out a teaser shared by the restaurant below.

The restaurant, located at 13463 Cedar Road in Cleveland Heights, will open July 20.

This story was originally published by our sister paper Cleveland Scene and reposted with permission.