Co-owners Hannah Wheatley and Evan Wallis say they want to make Big Chill a place where everyone feels welcome and will find something they like. 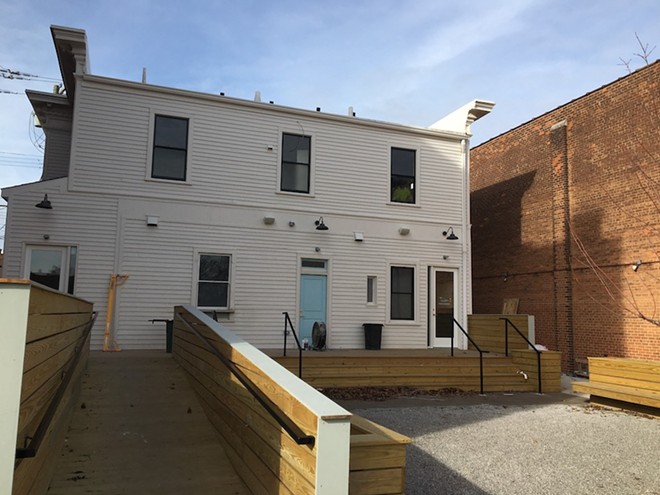 College Hill will soon welcome a new neighborhood bar to its Hamilton Avenue business corridor. And not only will this bar have adult beverages, it'll also soon have a window where you can order ice cream.

Wife-husband duo Hannah Wheatley and Evan Wallis are putting the finishing touches on Big Chill, with the hopes of opening its doors at 5912 Hamilton Ave. on Dec. 16. Both have experience bartending all over the city and say they fell in love with College Hill — and the idea of opening a bar there — when they moved to the neighborhood two years ago.

"We pretty soon after that decided that it was a great place to open a bar. We just really fell in love with the neighborhood and it seems like it was a little bit of a missing piece to this area. There's a lot of restaurants, there's a great brewery across the street, but there wasn't a neighborhood bar," Wheatley told CityBeat.

But Wallis and Wheatley also noticed the number of families in the area, so in the spring or summer, they'll officially open their soft-serve ice cream window on their patio. And that desire to have something for everyone extends into what they'll offer inside the bar. They said they'll have a wide variety of beer and wine, and they want to know what their customers like.

"We really want to focus on the fact that we want to carry what people want. ... If a lot of people are asking for X beer or X-type of wine, we'll get it in as soon as possible," Wheatley said.

Big Chill will also have a cocktail menu with the same customer input. While they plan on starting with a small, seasonal menu, Wheatley adds they want to talk to people and find out what they like.

"We really love this neighborhood and want to bring something here where every person who walks in feels welcome and hope we would have something they would love," she said.

One thing Wallis and Wheatley definitely want on the cocktail menu though is Irish coffee, which they've been working on perfecting.

And along with drinks, Big Chill plans on offering snack items made in-house, but they're still working on that menu.

Big Chill is part of the Keymark Development, a partnership between nonprofit College Hill Community Urban Redevelopment Corporation and 8K Development to revitalize four buildings on the eastern side of the 5900 block of Hamilton Avenue.