Blue Ash Chili to Appear on Another Episode of 'Diners, Drive-Ins and Dives'

The restaurant will be closed during the day on Wednesday for filming. Photo: facebook.com/BlueAshChili
Guy Fieri and crew will be stopping by Blue Ash Chili on Wednesday, Feb. 23.

A true Cincinnati staple, Blue Ash Chili is set to appear in its second episode of Diners, Drive-Ins and Dives and the filming happens this week.

Show host Guy Fieri and crew will be stopping by the Cincinnati-style chili parlor this Wednesday, Feb. 23 during the day for the filming, per a Facebook post from the restaurant. Blue Ash Chili says they'll be closed during that time but will reopen by 5 p.m. for dinner.

The have not announced an episode air date yet.

Blue Ash Chili last appeared on the show in 2010 during season 9, episode 8 “Comfort Food With Attitude." On the show, Fieri described the Blue Ash spot as a chili parlor taking customer favorites to the next level. 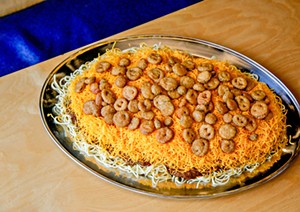 Photo: Hailey Bollinger
Blue Ash Chili's 6-Way
The menu still pays tribute to that visit with the "Guy's Way," which is a bowl of chili with onions and crackers. It also has the Diners, Drive-Ins and Dives' stamp of approval next to the 6-Way, which was featured in the episode and has all the elements of a classic 5-Way — chili, cheese, beans, spaghetti, onion — with the option to add fresh or fried jalapeno slices.

If you’re interested in eating like the Mayor of Flavortown himself, check out our list of all the Diners, Drive-Ins and Dives locations within driving distance of Cincinnati.