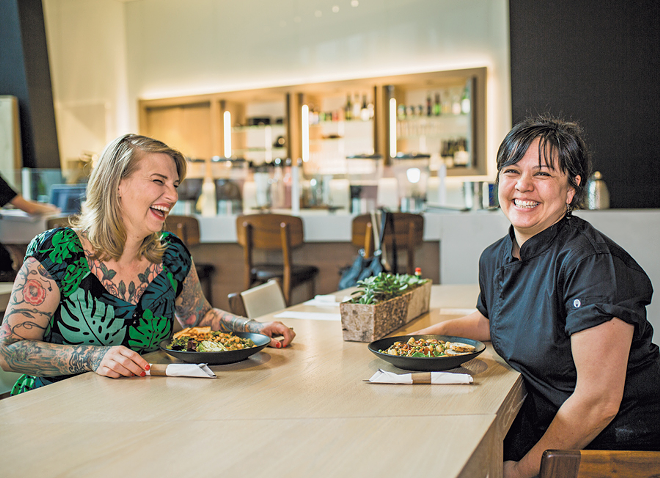 Photo: Hailey Bollinger
Molly Wellmann (left) and Lisa Kagen of Wellmann’s Brands expanded the café space in the Contemporary Arts Center to accommodate more food, more seating and a new bar.
If you’ve been craving a bit of cultural enrichment during your lunch hour, look no further than the latest offering from the juggernaut that is Wellmann’s Brands: The second location of the popular Over-the-Rhine carryout Bottle & Basket recently opened in the lobby of the Contemporary Arts Center in the former Collective Espresso space.

Molly Wellmann, face of the brand, jumped at the chance to open a café in the CAC when museum director Raphaela Platow approached her about the idea.

“I knew my partners would agree, so I said yes,” she says.

Unlike the original Bottle & Basket at 1400 Republic St., the new location offers both indoor and outdoor seating as well as more kitchen equipment to allow for an expanded menu that will feature daily specials.

The menu was designed by chef Lisa Kagen, the mind behind Northside café Melt and the original Bottle & Basket (formerly known as Picnic & Pantry) who now does catering for all of the Wellmann’s Brands establishments. It was inspired by a picnic and potluck theme with a nod to Southern comfort foods.

“Everything is made from scratch and we’re focusing on smoked or braised meats and high-protein salads with halibut and salmon grilled to order,” Kagen says. “We will also offer plenty of vegetarian and vegan foods as well.”

Fried foods like fried green tomatoes and burrata — a fresh Italian cheese made from mozzarella and cream — will be added soon as Kagen increases her staff.

She says the light menu is perfect for the downtown office crowd as well as museum-goers.

“I used to work at Federated Department Stores a long time ago and I never wanted to eat anything heavy,” she says. “People want to eat light but they don’t want to be hungry two hours later, so I’m trying to focus on things that don’t get people weighed down.”

The menu features a variety of panini made with naan, baguette sandwiches (chicken salad is a favorite), seasonal soups like Kentucky Burgoo Pot Pie and small shared plates with options like charcuterie and cheese or beer cheese, which are the same dishes as those served at Wellmann’s Myrtle’s Punch House in East Walnut Hills.

There is a selection of Frontier herbal teas brewed fresh daily as well as craft sodas designed by Wellmann. All-day breakfast consists of egg sandwiches served on Sixteen Bricks’ flax baguettes with a choice of bacon, goetta or smoked pork tenderloin, and an assortment of pastries. Service is geared to be fast in order to compete with other local lunchtime carryouts.

As a former art student, Kagen is thrilled to be working alongside the artists and staff of the CAC.

“I went to art school, so when I started cooking I got to combine everything I learned,” she says. “Now I get to be around more of that synergy, constantly just being around the people who work here in the museum doing installations — you know that energy of shows is constantly changing. It’s inspiring. I need that. I love being around other artists.”

Wellmann is also quick to point out the creativity of her chef.

“Lisa is an artist and she puts a lot of heart and soul into her work,” she says. “She’s really detail oriented — she even makes the boards we use for our cheese boards out of reclaimed wood.”

Bottle & Basket is just the first part of Wellmann’s “takeover” of the CAC lobby. A moveable happy hour bar called M. Wellmann’s is in the process of being built in Vermont and will be installed in the Walnut Street window in a matter of weeks. The transportable feature of the bar is necessary due to the large number of private events held at the museum.

“What better way to enjoy this incredible gem we have in the middle of the city than to be able to come and have a drink after work?” Wellmann asks.

She’ll be designing the drinks to coordinate with the museum’s art installations, and the cocktail menus will change as the shows come and go.

“It will be fun to do modern things rather than all of these old cocktails that I do all of the time,” she says. “It will be neat to do things to match the art.”

New lounge seating for the bar area as well as new seating for Bottle & Basket are in the works.

M. Wellmann’s will dovetail nicely with Bottle & Basket’s hours, opening just as the café shuts down for the day at 4 p.m., making it the perfect place for a drink before dinner or a show. The same charcuterie and cheese boards and small plates that are on the daytime menu will be available to accompany the cocktails.