Walk up to Bee’s Barbecue on Chandler Street in Madisonville, and you won’t have to wonder why it has sold out every day since opening on April 17.

Photo: Provided by Bee's Barbecue
Bee's sandwiches include brisket, pulled pork, turkey breast and sausage, along with The Bee Sting, which is pulled pork topped with coleslaw, Bar-B-Q Grippo’s and Bee’s hot sauce.

Walk up to Bee’s Barbecue on Chandler Street in Madisonville, and you won’t have to wonder why it has sold out every day since opening on April 17.

Bee’s outside patio is reminiscent of a classic barbecue joint, with a smoker and picnic tables. Upon entry, you’ll be greeted by bumble-bee-inspired decor. The restaurant’s namesake, Brendan “Bee” Hague, can usually be found in the kitchen.

“They don’t let me in the front of the shop because I’ll just talk to everybody,” Hague says with a laugh. “I gotta stay in the back and slice all the meat.”

Hague grew up in Madisonville, just 10 blocks from where Bee’s Barbecue is now located. As a kid, he would ride his bike to the nearby catering location of the now-closed Barbecue Review and get pulled-pork sandwiches. That experience — and those sandwiches — prompted a lifelong love for barbecue, he says.

Before Bee’s, Hague was a bartender at MadTree Brewing when he started getting the itch to barbecue.

“My now-wife loves hosting,” Hague says. “And we’d have these get-togethers and parties at the house. I started fooling around with smoking meats in big batches and people were like, ‘Man, this is really good.’ ”

In 2017, he obtained the LLC for Bee’s Barbecue, found a smoker trailer and began pop-up barbecue events, including at Oakley Wines and the now-defunct Dutch’s Larder in Hyde Park.

“They would close their kitchen at 4 p.m. on Sundays,” Hague says of Dutch’s. “The bar would stay open, and typically I’d show up at 5 p.m. and set up and we’d sell barbecue. It got really popular there. By the end of it, there was a line down the street.”

Hague also catered for about two years and saw success.

But, from the beginning, he knew he wanted a brick-and-mortar location.

In 2019, he found the storefront on Chandler Street — previously home to Jojo’s Chicken & Fish, a pizzeria and a candy shop — and has been paying rent on the space ever since.

Hague’s original plan was to open in early 2020, but the COVID-19 pandemic hit that March, closing restaurants, schools and businesses. Hague was unable to do pop-ups as Bee’s Barbecue, so he paid out-of-pocket for his shop all of last year. 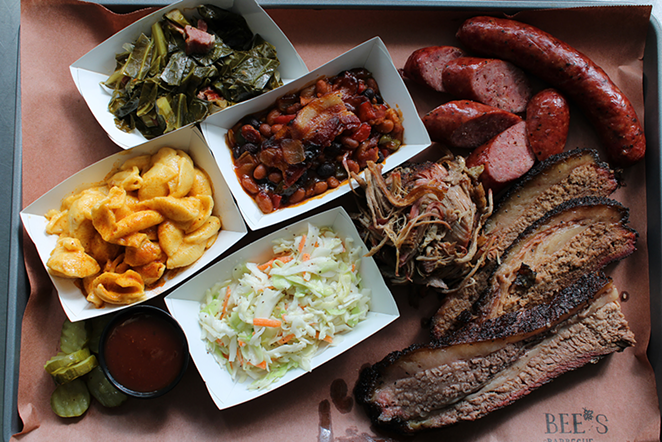 Photo: Provided by Bee's Barbecue
Sides include creamy shells and cheese, collard greens, coleslaw and sticky barbecue beans, which include bits of briskets.

But every day since he finally opened, Bee’s has sold out completely. The shop is open 11 a.m.-4 p.m. Wednesday through Saturday, unless they run out of barbecue earlier.

With its “Porkopolis” moniker and litany of pig statues, Cincinnati has its fair share of barbecue places. Alabama Que on Short Vine has mouthwatering turkey tips; Lucius Q has signature sandwiches, meat platters and live music; Eli’s BBQ is a Cincinnati institution with outdoor seating and unique sides; and don’t forget the iconic Montgomery Inn. It can be hard to differentiate yourself as a new barbecue joint, but Hague has a certain mentality that he thinks sets him apart.

“We make it fresh every day,” he says. “And we don’t sell yesterday’s barbecue. We won’t do that. We open at 11 a.m., sell it until it’s gone and then get ready for the next day. To me, barbecue has a life and needs to be treated as such.”

Bee’s also offers sandwiches, such as brisket, pulled pork, turkey breast and sausage, along with The Bee Sting, which is pulled pork topped with coleslaw, Bar-B-Q Grippo’s and Bee’s hot sauce. Sides include creamy shells and cheese, collard greens, coleslaw and sticky barbecue beans, which include bits of briskets. Bee’s also offers a few desserts, like banana pudding and bourbon peach cobbler.

Hague gets a majority of his ingredients from Findlay Market and Avril-Bleh, continuing relationships that he created early on with Bee’s Barbecue.

“We really care about sourcing from local purveyors as best as we can,” Hague says. “I didn’t want to end (the) relationship (with vendors) because we’re busier and it was more convenient to go with someone else. We worked out with Mackie’s down in Findlay Market so that I come down once a week and they come up once a week. I just told them that I didn’t want to break up.”

Much of Hague’s successful partnerships are credited to his personality.

“I take care of my relationships and my friendships,” Hague says. “And I think that’s important.”

As for an end goal, Hague says he hopes to “make it through this week.”

“I want to sustain a really nice quality product,” he says. “I want to be involved with the community that I grew up in. And feed the people that live there. There’s room for growth, but we’re gonna do it at our speed. On our terms.”