Owner Brett Gage opened his shop just before the pandemic. A year later, he hopes it eventually becomes the neighborhood gathering space he dreamed of. 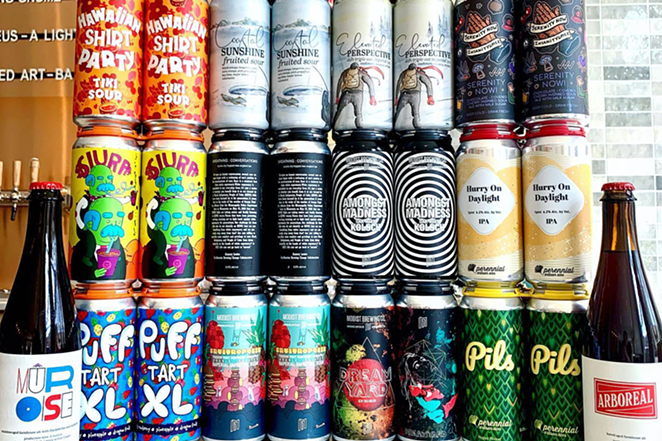 Brett Gage, owner and sole employee of Standard Beer in OTR, opened his business roughly one year ago on Feb. 24, 2020, just before the COVID-19 pandemic began sweeping across the nation.

Standard, a craft beer and wine bottle shop and taproom, offers a curated selection of craft beer on a local, national and international level. The shop offers carry-out and 16 constantly rotating taps for on-site pours. While the main focus is beer, the shop also carries wines, ciders and seltzers.

A majority of Standard’s operations have occurred during the pandemic, which felt like a “punch to the gut,” Gage tells CityBeat. The possibility of shutting down so soon after opening was scary, Gate says, but Standard’s model allowed him to continue carry-out operations.

“Having the carry-out aspect allowed me to stay open for the entirety of quarantine and it really allowed me to focus on the product I was bringing in and what I wanted my store to become," Gage says. "It enhanced my selection to a great degree, as people were constantly looking for new and interesting beers to try -- because what else was there to do?”

Gage is no stranger to the service industry. He was a server at a steakhouse for years and most recently was the bartending/bar manager with Thunderdome Restaurant Group. In the early 2010s, he began to get into the craft beer scene, and over time it developed into a passion, Gage says.

While Cincinnati is a craft beer hot spot, Gage believes his business is set apart from others due to his beer selection and atmosphere.

“It's not uncommon for someone to walk in, look at the tap list, and say ‘I've hardly heard of any of these breweries.’ And ultimately, I love hearing that!” Gage says. “Also, the overall atmosphere of the store is quite unique. Think coffee shop setting but with beer and wine. There are no TVs. Come in with your computer and get some work done. Come with some friends and just talk, have conversation, play some games. Come read a book. It's a comfortable setting for any and all.”

“Unique” beer offerings from Standard tend to be in the sour realm, Gage says, with Lambics, Oude Gueze, wild ales, saisons and grisettes on the rotating list of offerings. But usually, once a case is gone, it’s gone.

While the store is now open with plenty of spacing between tables, Gage says it’s been a struggle getting people inside. Gage chose the location on the corner of 15th and Pleasant to be a “gathering place” for the neighborhood, which he hopes will become true as more restrictions are lifted.