Eighteen at the Radisson preserves the kitschy marvel of rotating restaurants 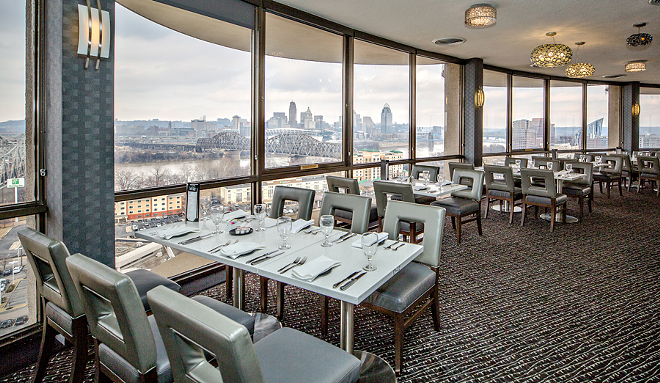 Photo: Hailey Bollinger
The rotating dining room at Eighteen at the Radisson offers unparalleled views of the city.

Are you dizzy in love? Is your head spinning thinking about that special someone? Maybe your world revolves around a person of intrigue in your life. (See where we’re going with this?) If so, Eighteen at the Radisson in Covington may be just the spot for wooing your date.

As Cincinnati’s only revolving steakhouse, you can enjoy a rotating 360-degree view of both sides of the river’s unique city skylines from the hotel’s 18th floor. The restaurant interior moves just fast enough to register with your eyes if you stare, but too slowly to notice at a glance — it takes an hour to make a full rotation and it’s not the entire top of the building that moves, just the restaurant floor.

Along with watching local landmarks pass by outside the floor-to-ceiling windows, you can also read metal placards about them on the wall as it floats past your eyes, like a local informational iceberg — extra points for getting to the end without standing up. (Possible 2018 trend prediction: funhouse-themed fine dining.) Here’s one fact I caught: Did you know that Paul Brown Stadium is the only true horseshoe stadium in the NFL? Throw that one around at your next football event.

The Radisson building has always been a hotel, one of two originally owned by Frisch’s and built in 1972, the same year the Easy Bake Oven came out, McDonald’s premiered the Egg McMuffin and cheese and pineapple sticks were the hot party food du jour.

Maybe visitors to the Space Needle can look at Mount Rainier while they dine, but we have the Brent Spence Bridge (named for a 16-term congressman; bet you didn’t know that).

In 2016 the restaurant underwent renovations and a name change — from 360 to Eighteen.

“The restaurant has been here for decades and the style of the restaurant and food has changed many times through the years,” says Director of Food & Beverage and Executive Chef Anthony Roberts. “I feel that the food and menu have improved with each update.”

Jacob Wagner, restaurant manager, worked under chef Todd Kelly at the Hilton Cincinnati Netherland Plaza before coming to the Radisson. He says the beef on the menu is angus reserve, an aged American beef hand selected for marbling, texture and color, and sold in the Great Lakes region. It isn’t available in stores or chain restaurants.

He recommends pairing the beef with the Radisson’s signature lobster mac and cheese (with smoked gouda, mozzarella and provolone) and a seasonal cocktail.

“We offer an approachable atmosphere,” Wagner says. “It’s an upscale service experience without the stuffy atmosphere. The new design and custom pieces embrace both Cincinnati and Northern Kentucky into its warm, elegant decor.”

My husband and I took a trip to the Radisson on a recent Saturday evening before Valentine’s Day and practically had the servers, view and ambiance to ourselves. We chuckled on the way there about feeling like we were paying for a fine dining experience and simultaneously buckling into a kiddy coaster, but actually the best part was looking out the windows and pointing to our favorite spots and weekend haunts. The rotating view was the perfect backdrop for dinner conversation.

Before the meal, we were served rolls with honey butter and ordered crab cakes ($16) for an appetizer. We went with the server’s recommendations for steaks — a ribeye ($35) and a New York strip ($32).

The first came with bourbon peppercorn cream (we got the last serving) and the second came with caramelized onions and mushrooms, although there were no onions left. Thankfully my husband eats mushrooms like popcorn.

We also got the mashed potatoes ($6) for a “shareable side,” and we topped the evening off with a cocktail: the seasonal sangria for me and the Manhattan for him. Other entrées include pastas (with a vegetarian option), fish, pork chops and poultry.

The decor does inspire a specific feeling of romance with slightly masculine overtones; gray accents with hints of red tucked into every corner, and dimmed lighting. Add in a diamond-patterned wall and you nearly have a theme dedicated to a particular popular trilogy of romance books — perfect for Valentine’s Day.

Although you might think the concept of rotating eateries began in the recent past — a blend of vintage kitsch, rooftop glamour and a dash of Las Vegas — the restaurant’s website gives the real scoop:

“History tells us that Emperor Nero, when constructing his Domus Aurea (or Golden Palace) after the great Roman fire of A.D. 64, installed a revolving restaurant in this palace of 300 rooms, all built for entertainment. In actuality, Nero’s engineer architects, Celer and Severus, engineered a revolving ceiling powered by slaves cranking the ceiling, which rotated and dispensed flower petals and perfume on the diners below.”

I’m afraid the Radisson neglects to shower you with flower petals and perfume, but the nighttime lights (including the iconic changing weather prediction beacons on the outside of the building), the interesting variance between each side of the river, the juxtaposition between old and new among the buildings, the huge windows and the glittering water are the real MVPs of Eighteen at the Radisson.

If you’d rather see the city in all its splendor during the day, don’t forget that you can rotate during breakfast, too. Brunch is available from 10 a.m. to 2 p.m. on Sundays. Bonus? It’s a buffet.

“We serve traditional breakfast foods like scrambled eggs, bacon and sausage, in additional to an array of salads, shrimp, fresh fruit and baked pastries” says Roberts, “but what people really come in for are the chef-carved prime rib, omelet station, and build-your-own crepes and waffles.”

Eighteen at The Radisson