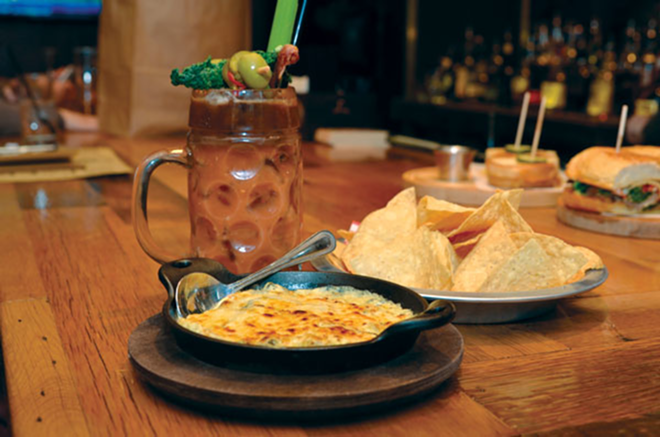 Kale and Spinach Dip at The Eagle OTR

Although Cincinnati sits right on the northernmost border of the South, we’ve been bereft of many authentic Southern restaurants — excluding barbecue and Cajun joints. Realizing a niche needed to be filled, brothers Joe and John Lanni and business partner Alex Blust opened The Eagle Beer & Food Hall in December. And since The Eagle landed, Over-the-Rhine’s dining scene has been enriched even more (… if that was possible).

The Lanni brothers, the team behind the successful Mexican-inspired Bakersfield and Currito brands, have knocked it out of the park again with this leap into the nationwide Southern food trend. With The Eagle, they’re exchanging margaritas for beer and tacos for fried chicken. Akin to Bakersfield, The Eagle has a relatively small menu, comprised of fried chicken, sandwiches, some snacks and several side dishes. Booze-wise, they serve 100 kinds of beer and have about 15 different brews on tap, including local offerings from neighboring Rhinegeist and MadTree breweries, and a few cocktails like a Bloody Mary and a Long Island Iced Tea called an OTR Iced Tea, with Ketel One Citroen, Cazadores Blanco, Bacardi, Tanqueray, triple sec, house-made sour mix and Coke served in an iced-tea pitcher, replete with sliced lemons floating on top.

The Eagle is nested inside a retired post office, and remnants of the past still remain: a golden eagle statue greets patrons at the hostess stand; behind the stand are a block of bronzed post office boxes; a giant mural of a bald eagle painted on the exposed-brick wall watches over diners. With its globed-light sconces, leather booths, U-shaped bar (thankfully with hooks on which to hang your purse or scarf), filament chandeliers and reclaimed wood ceiling and wall panels, the entire restaurant emanates bonhomie. It’s also the kind of place where you and your party can get a ton of food and not break the bank.

To try a wide-range of foodstuffs (like we did), focus on one entrée, such as the fried chicken, then order several sides — all of which are under $5. The homemade pickles ($2) are a good place to start. They are sweet, spicy and savory, all at once. Those three tastes define The Eagle — sometimes in one dish, other times separately. The Crunchy Hominy (corn kernels soaked in lime and puffed up; also what grits are made from) is a great way to rouse your palate. The breaded and seasoned nuggets taste like really good lime-flavored Doritos, except this permutation is made with real ingredients, not artificial ones, and is actually somewhat healthy.

The fried chicken is free range, antibiotic-free and sourced from Amish Ohio farms. Besides the cocktails, the chicken is the most expensive item on the menu, which exemplifies how affordable everything is. You can get a whole chicken for $16, a half chicken for $8 (white and dark meat) or a quarter of a chicken for $5. We tried the half chicken (a breast, wing, leg and thigh) with a piquant honey sauce that was mild at first but snuck up and punched us in the face with spiciness. The chicken complemented all the sides we ordered: five-cheese mac-and-cheese, with blue cheese, two kinds of cheddar, American and parmesan cheeses; (“sufferin’”) succotash, a traditional Southern dish with beans, veggies and bacon; and spoonbread, similar to cornbread except sweeter and less crumbly. Out of all those sides, I liked the mac-and-cheese the best. It had crunchy breadcrumbs on the top and wasn’t too gooey like a lot of mac-and-cheeses can be. Plus, it came in an iron skillet, which basically means serious business.

The thing about The Eagle is you can eat and drink for hours — you’ll feel stuffed but can always find room for more. Their Bloody Mary ($8) was especially filling, with olive, kale and jalapeno pepper accoutrements; a spritz of Guinness; Tito’s vodka (from the South! — Texas to be exact); and a spicy, in-house mix. I, for one, prefer house mixes to just pouring tomato juice in a glass and calling it a Bloody Mary. The Eagle also tucked a slice of bacon in the Bloody, because, why not? While my dinner companion ate, er, drank his Bloody, I worked on my two-fisted draft Miller High Life that was poured into a 16 oz. glass chalice. For a mere $2, The Champagne of Beers is treated like royalty at The Eagle. And, really, shouldn’t more things come in chalices?

The Eagle doesn’t have a dessert menu, but if you’re still hungry and craving something sweet after feasting on a lot of booze and Southern food, make sure you go next door to Holtman’s Donuts (1332 Vine St.) for a treat.