From Thursday to Sunday (May 17), OCBA encourages craft beer fans to buy Ohio brews and post photos of their "hauls" on Instagram using the hashtag #OhioBrewHaul

The nonprofit Ohio Craft Brewers Association (OCBA) launched the Ohio Brew Haul on Thursday to encourage beer drinkers to buy beer to support their local breweries. The event is a fundraiser for both the OCBA and Ohio craft breweries.

“Ohio’s craft breweries contribute a great deal of positive impact in their local communities,” said OCBA executive director Mary MacDonald in a release. “We created this campaign to give people a fun way to support the breweries that make their neighborhoods, towns and cities such great places to live and work.”

From Thursday to Sunday (May 17), OCBA encourages craft beer fans to buy Ohio brews and post photos of their "hauls" on Instagram using the hashtag #OhioBrewHaul. During this time, 10 winners will be selected to receive prizes from the OCBA, including a stainless steel growler and a “Drink Beer Made Here” flag. 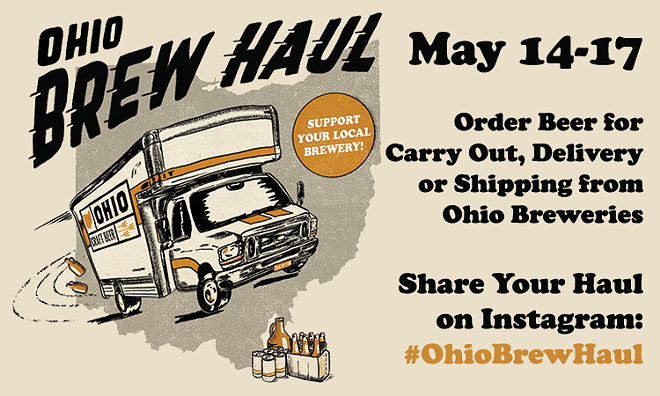 Local breweries participating in curbside and carry-out for the Ohio Beer Haul include:

A map on the OCBA website displays the locations of the 239 participating Ohio breweries.

Half of the winners will be chosen at random, while the other half will be picked based off the theme of their brew haul photos. Additionally, OCBA is selling limited-edition brew haul merchandise on its online store from May 14 to May 31.

Purchasing merchandise makes one eligible for five passport stamps on the Ohio On Tap app, which can be redeemed for prizes. Net proceeds are split evenly between OCBA and the customer’s choice of an Ohio craft brewery.

“Like our breweries, like small businesses, like pretty much everybody, we’re seeing the economic impacts of the pandemic, and we’re looking for new and creative ways to try and get through it,” said OCBA deputy director Justin Hemminger in an interview. “Ohio Brew Haul is a nice little collaborative fundraiser. We can help our breweries out, and we can put a little money in the bank for ourselves as well so we can keep doing the work that we do for breweries.”

Earlier this month, one of OCBA’s biggest fundraisers, “Six One Pour,” was canceled due to the COVID-19 pandemic.

Closed by order of the Ohio Department of Health in March, bars, restaurants and breweries are permitted to reopen outdoor seating May 15; indoor seating may resume May 21.

Learn more about the the Ohio Brew Haul at ohiocraftbeer.org/ohiobrewhaul.