“Culturally, nothing is dead, but a lot has been lost. It is a disappointing conclusion to a significant chapter in local brewing history.” 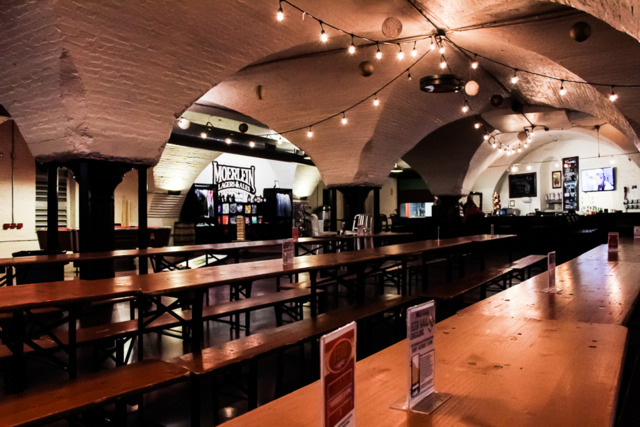 Pour one out for Christian Moerlein Brewing Company. They recently announced the closure of their historic Moore Street brewery in Over-the-Rhine, which means the company's founder, Greg Hardman, has been let go along with 20 employees.

Cincinnati Beverage Company took ownership of Moerlein, Little Kings, Hudepohl and Burger Beer back in March. And the company claims that as a result of the closure of big beer movers like bars, stadiums and events due to COVID-19, they had to sacrifice the historic facility and its production team.

"We knew we couldn’t let these legacy Cincinnati beer brands go out of business, but the current model wasn’t sustainable," the company wrote in a Facebook post announcing the development. "So we turned to a different model to keep these brands alive, and are working with a local production partner to bring our brews to you."

Cincinnati author and beer historian Mike Morgan was called upon to help unpack the implications of this closure and transition. Morgan's writing is required reading for local beer aficionados and history buffs thanks to the thorough research and passionate commentary found in his books Over-the-Rhine: When Beer Was King and Cincinnati Beer.

Morgan offers some insight on this announcement and shares his projections for the brewing industry's future.

CityBeat: Is this location's closing a major loss for the city's culture? Why or why not?

Mike Morgan: It is sad. I witnessed the first batch of beer being brewed in that building over a decade ago. It was the first batch of Christian Moerlein to be brewed in Over-the-Rhine since the original brewery closed in 1920, and that small batch of beer was a reclamation of history as well as hope for the future of Over-the-Rhine and the local brewing industry. The brands were contract-brewed before then, and it sounds like they will be contract-brewed again. Also, both Over-the-Rhine and Cincinnati brewing in general are on solid ground. So, culturally, nothing is dead, but a lot has been lost. It is a disappointing conclusion to a significant chapter in local brewing history.

CB: Would you please provide your historical insight on this location and what it means to you and the city?

MM: The combination of 19th-century malt room and lagering cellars that were the taproom and the floors below it are of national historic importance (the site belonged to the old Kauffman Brewery); and Kauffman was one of Cincinnati's most highly respected brewers. Late in his career, he started importing the absolute best ingredients from around the globe, and he broke with the custom of the time by selling his beer for more than anybody else in town charged. Brewers were constantly concerned that competitors would lower their prices and undercut each other. Kauffman went the other way. He charged more and explained, "It's worth it." Customers agreed. As other breweries' sales tanked, his increased. He was ahead of his time, kind of a patron saint of craft beer.

CB: What would you like to see done with the historic site?

MM: It should be a brewery. People say that about almost every vacant building they see these days, and they're almost always wrong, but this one is meant to be a brewery. The historic part of it was built as the John Kauffman Brewery's malt house. That's why the former taproom has those gorgeous arched columns and beveled ceiling. It is a very rare, intact 19th-century malt house, and it is of national significance. It is dark in there, but it doesn't have to be. It has windows. Under the malt room is an epically cool basement, and directly under that is a portion of the Kauffman lagering cellars. If the potential of all of this were maximized, it would have no competition as the best taproom space in Greater Cincinnati, and I am unaware of anything that could rival it on a national scale. For that portion of the building to be anything other than a taproom would be criminal. To the south of the malt room is a large, industrial space that looks like about half of every urban taproom in the country.

The rest of the building is huge, pretty open and versatile. Because it was previously the Husman's Potato Chip factory, it has enough power and water service to feed a small city. There is always going to be a challenge getting semis in and out, and that is only going to get worse as the neighborhood around it improves. So, it may not be optimal to utilize the entire building as a commercial brewery, but at least a large portion of it should be used for brewing and a post-pandemic taproom. Maybe the answer to its future is creative mixed-use.

CB: Is this closing down trend going to continue with more breweries than you originally anticipated at the pandemic's start?

MM: Right now, I don't think so. In 2019, we were in an unprecedented state of the industry and I didn't think that everybody was going to survive. I thought breweries were going to start collapsing under normal market conditions. Then came 2020 and all the wonderfully horrific things it has had to offer.

In March, I thought the brewing business was going to look like an '80s slasher film, blood everywhere, but things happened that I did not predict. First, everybody started drinking more — because what else are you going to do during a slow-boil apocalypse — and you couldn't go to the bar, so package sales went through the roof for a lot of people. I suspect that they are rare, but there are breweries with much better balance sheets in 2020 than they had in 2019.

Federal stimulus money was a short-term lifeline. State governments were also unusually pragmatic with deregulation. Direct deliveries, for example, helped some people. Also, a lot of people changed habits and got growlers filled up and found other ways to support their local breweries. I am NOT saying that things are good. COVID sucks. If you rely heavily on taproom sales or draft sales to bars, you're either dead or on life support with a questionable prognosis. There will be blood, but there is nothing like an apocalyptic event to hone your survival skills. Some breweries will be winners, some will barely survive, but they will emerge stronger for wear. And some will die. We will lose breweries that we love. My heart breaks for everyone that is going to watch a dream and a massive amount of time and work slip away, but I am more optimistic now than I was seven or eight months ago.

CB: What can be done to save our breweries?

MM: First, all of us, even those of us who are atheists, need to put our hands together, close our eyes tight, and pray to whatever god is out there that Mitch McConnell drops dead tomorrow, because that is probably the only chance we have at seeing a meaningful stimulus package come through Congress in the next few weeks. Without that, a huge number of taprooms, neighborhood bars, amazing restaurants and small businesses of all sorts are going to collapse before widespread vaccine distribution. The end is near, but a lot of people aren't going to make it through without help. Second, aside from divine intervention, you can buy local. Drink local beers and go out of your way to buy cans, bottles and growlers directly from breweries whenever possible because that keeps a lot more of the money in house.

UPDATE: Since this interview, a federal stimulus has passed. Here's what's in it — and what's not.