Founded in 2006 by The National guitarist Bryce Dessner, this year's MusicNOW again runs concurrently with the National-hosted Homecoming festival. The daily lineups for both fests have been announced

The lineup and schedule for the 2020 MusicNOW festival have been announced. Founded in 2006 by The National guitarist Bryce Dessner, MusicNOW again will run concurrently with the National-hosted Homecoming festival in early May.

MusicNOW events will run May 8-10 in various venues throughout Downtown and Over-the-Rhine. The Homecoming festival — featuring two headlining sets from The National — takes place May 8-9 at the riverfront's Smale Park. "Over the last 15 years MusicNOW has always been a celebration of our hometown of Cincinnati and place to bring new music and collaborations to life,” Dessner said in a statement about this year's events.  "We are so excited to present this year’s lineup in partnership with Homecoming, which features many of our favorite artists taking risks together and premiering new music for the first time.  The initial idea we had 15 years ago to create a festival that could be about process and creative residencies, and making room for artists with diverse educations and backgrounds, remains a huge part of why we do this.

"It’s an honor to do this in the city and in partnership with Homecoming."

On May 8 and 9, MusicNOW will present special late-night, post-Homecoming concerts at OTR's Woodward Theater. The venue will also host a special late-night concert on May 10, after a full day of MusicNOW events in and around Washington Park, including at venues like Memorial Hall, Music Hall's Ballroom and Transept.

Sunday, May 10's full slate of MusicNOW concerts starts with a free show featuring Eve Owen, Mina Tindle and Leif Vollebekk at the Washington Park bandstand beginning at noon. Some of the rest of the shows are only available to those who purchase a MusicNOW "day ticket," which are $80 and go on sale this Friday, Feb. 7 at 10 a.m. There will also be tickets available for some of the May 10 MusicNOW shows individually.

Some artists who performed at 2018's inaugural Homecoming festival will have a presence at MusicNOW on May 10. L.A.-based singer/songwriter Moses Sumney will headline an evening concert at the Music Hall Ballroom (single tickets will be available for $33). 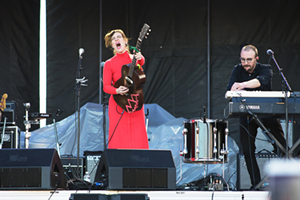 Photo: Brittany Thornton
Feist — who performed at the 2018 Homecoming festival —is playing MusicNOW this year

Leslie Feist — aka Feist, who appeared at Homecoming in 2018 — will also be participating in MusicNOW 2020, presenting a special collaborative project based on Homer’s Odyssey. From the press release:

Leslie Feist will perform Odyssey Project with Shahzad Ismaily and Todd Dahlhoff and develop a MusicNOW Chorus on the ground in Cincinnat.  The project was born of a series of improvisations made by Feist, Todd Dahlhoff and Shazad Ismaily, during the 37d03d residency in Berlin, August 2018, and developed at Sounds from a Safe Harbour in September 2019 in Cork, Ireland.  Based on Emily Wilson’s lucid and remarkable translation of Homer’s Odyssey, the trio experimented with reframing the text as well as manipulating electric, electronic, and acoustic instruments.

Check out the full lineup for MusicNOW below. Tickets (which all go on sale Friday at 10 a.m.) will be available from different sites; visit MusicNOW on Facebook and musicnowfestival.org for specifics.

(All events are included in the day ticket package.)

4 p.m. @ First Lutheran Church (at 1208 Race St.; included in day ticket only)
I Will Call You Master by William Brittelle, with Shahzad Ismaily & Gyda Valtysdottir
Gyda Valtysdottir with Taylor Carrasco

The daily lineups for Homecoming were also just announced. The National will play their 2010 album High Violet in full on May 8, then a career-spanning set to close out the festival on May 9. See below for the full lineups.

Single-day tickets for Homecoming go on sale this Friday, Feb. 7 at 10 a.m. Visit ntlhomecoming.com for tickets and further info.

Patti Smith and Her Band

Of Monsters and Men